Home / Blog Posts / The Ghost of Races Past: Reconciling an Older, Less Fit Body With Expe

The Ghost of Races Past: Reconciling an Older, Less Fit Body With Expectations Based on Prior Performances 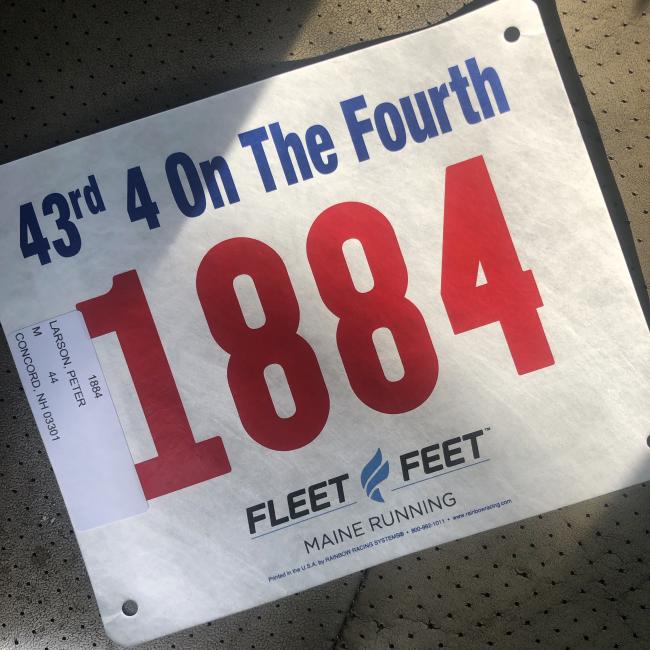 On July 4th I ran my first timed race in probably five years, and I’m pretty sure it was the first race I’ve run since I turned 40. I’ve done a few Ragnar relays with friends in the interim, but nothing where it was just me against the clock. The race was held in Bridgton, Maine, and it is a race I have run many times. In fact, it was the first race I ever ran, way back in 2007.

The reasons why I haven’t raced in several years are many – employment change, growing kids with busy lives, new interests, etc. – but primary among them is that I’m older (now 44), and just not as fit as I used to be. Though life has taken me in new and different directions, all of which have been exceedingly positive, the one regret I have is that I have let my fitness go. However, fitness here is a relative thing. I’m not sedentary, and I never really stopped running – I just run a lot less, and as a result have gained some weight back that I shed when I was putting in 30-40 miles per week on a regular basis. As a result, I’m in no condition to even come close to past race performances right now.

Knowing that I can’t compete with my old self has caused me to avoid even trying. A race would only lead to disappointment, and confirmation that I’ve lost much of what I gained through years of regular training. Deep inside I know that this was dumb, and that what I’ve lost can be gained back, but I think I also knew that gaining it back wasn’t realistic in the near-term. Life had just gotten too busy to make running a priority.

Fortunately, my perspective began to change during the last school year. My first two years teaching high school were hard – developing curriculum took an immense amount of time, and I had little free time for anything other than preparing to make it through each day. Last year, however, things changed, in large part due to the fact that my oldest son was a Freshman at my school. He was involved in soccer in the Fall, so I would often run while he was at practice. Then he decided to do indoor track, and I volunteered as an assistant coach. Indoor track at a school without an indoor track means running outside through the dead of a New Hampshire winter, and I got to run a lot with the team. Indoor was followed by outdoor track, but running was less frequent for me since I was often busy helping out the coaches doing timing, working with injured kids, etc. My competitive spark reemerged (watching the boys outdoor track team win states helped!), and I went into this summer with a goal to start training more regularly, and to maybe run a race or two. My son competes in jumps and has been doing the USATF Junior Olympics circuit this summer, so we’ve gone to the track several times and I get some speed work in while he warms up. I try to run most days, sometimes fast, sometimes (mostly?) slow, and it has felt (mostly?) great.

Choosing to race in Maine was a joint decision with my wife, and our ulterior motive was to get my son to run it with us. Though he loves long, triple, and high jump, he hasn’t quite found the love of running that we have, and he has struggled a bit with grit when the going gets tough on the track. Somewhat surprisingly, he agreed to do it, as did my daughter (who will be a Freshman this coming year) – there was no turning back.

I knew going into the race not to expect a PR, or anything close to that. My best time on the 4-mile course was a bit under 26 minutes, and with age has come the wisdom to know that if I even tried to run one mile at sub-7:00 pace I would crash and burn hard. I refocused my goal to beating my time when I ran the race the first time – 30:41. And my secondary goal was to try to beat my son – he’s way fitter than me, but he’d never run a road race before, and 4 miles would be the longest he’d ever run in one stretch. I failed on both accounts.

I will admit to being a little disappointed that I couldn’t beat my old race time. However, I came within 30 seconds of my tertiary goal (32:00), and with carrying some extra body weight on a hot day that’s not too bad. I also know that regaining fitness is a long process, and that there are no quick fixes – just a lot of hard work to get back to where I want to be. I’ve come to think of my race history as just that – history. I have my 30’s PRs, and now it’s time to work on my 40’s PRs. I don’t know that I’ll ever beat any of my old times, but that’s OK. I’ve been away from racing for long enough that the gap has cleaned the slate a bit. It’s time to move forward.

On a final note, I have to say that the best part of finally racing again is that I did it with my family. I honestly can’t remember the last time my wife ran a race, but she completed it respectably as well. My son, who has struggled with cramping when trying to run distance, had a no-cramp day and smashed his expectations (and his old-man’s time) by going just under 30 minutes. He was quite shocked by his performance, though I’m still not sure I’ve hooked him on running yet. And my daughter, who I wrote about a long time ago in one of my personal favorite posts, finished her first road race (and longest ever run) well under her goal of 40 minutes. My pride as a parent and husband made it far easier to swallow any individual hurt pride that I might have had.

I’ll end with a piece of advice – if you haven’t raced in a long time because you are scared of not living up to past performances, sign up for a race now. Give yourself a realistic goal and go for it, and talk someone into running it with you if you can. I’m glad I did.

You just finished reading The Ghost of Races Past: Reconciling an Older, Less Fit Body With Expectations Based on Prior Performances! Consider leaving a comment!