The Man Versus Horse Marathon 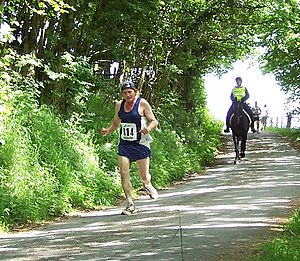 If someone asked you if you could outrun a horse, your answer would most likely be a resounding “no.” You’d probably consider the idea of a human being able to outrun a horse at any distance to be preposterous. However, if you happen to be an elite marathoner and the race covers 22 rugged miles in the Welsh town of Llanwrtyd Wells, there’s a pretty decent chance that you would emerge victorious. How do I know? Because this exact result has happened twice at the annual Man versus Horse Marathon.

Started in 1980, the Man versus Horse Marathon was initiated as the result of a challenge proposed in a pub (seemingly the location where all challenges of this nature begin). Over the past ~30 years, the race has grown to include over 500 runners and 40 horses. Perhaps the most impressive thing about this particular race is that in 2004, after almost 25 years of equine domination, the race was won by a human (read about it here on the BBC New website). Not only did Huw Lobb win the race in 2:05:19, he defeated the runner-up, a horse named Kay Bee Jay, by over 2 full minutes. When asked what he would do with the £25,000 in prize money he earned, Lobb responded (via the BBC article), “The first thing that I will do with the money is buy myself some decent training shoes.”

Lobb’s victory for the human side was repeated in 2007, when Florian Holzinger won the race with a time of 2:20:30, 11 minutes ahead of the nearest horse. In 2008 and 2009, a horse named Dukes Touch of Fun reclaimed the title for the equines, though Lobb’s time from 2004 has not been bested since. In response to Dukes Touch of Fun’s 2008 victory, her owner, John McFarlane, commented “We cut it a bit fine but we have proved that horse is superior to human…She deserves a good rest and some extra carrots now.”

Aside from being an unusual spectacle, what this race shows is that humans really are excellent distance runners when compared to almost any other animal on the planet. Although we’ve only won twice, that fact that we can compete foot to hoof with an animal that is more often used to transport our bodies over long distances lends further evidence to the phrase that we were “Born to Run.”

For more information and race results dating back to 1987, see the Man versus Horse Marathon entry on Wikiedia.

Below is a video story about the Man versus Horse Marathon:

Below is video footage from the 2004 race won by Huw Lobb:

You just finished reading The Man Versus Horse Marathon! Consider leaving a comment!