The Potential Downside of Wearable Biomechanical Monitoring Devices for Running

One of the big trends I see coming is an onslaught of wearable monitoring devices that can measure aspects of your running biomechanics.

For example, I received a Garmin Forerunner 620 for Christmas. The Garmin 620 is unique among Garmin watches in that it adds in the ability to measure a slew of new variables as part of the new “running dynamics” suite collected by the HRM-Run monitor that pairs with the watch. I’ve only just started playing with the 620 (loving it so far, hopefully will get a first impressions post up soon), but I’m not yet sure what to make of the data it provides me.

Here’s an example data summary from a run from a few days ago: 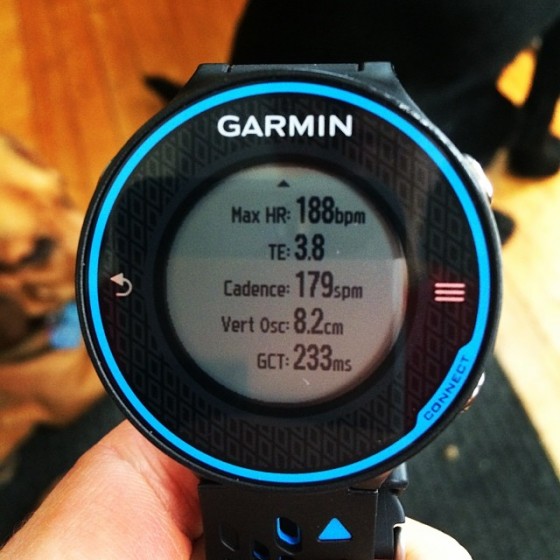 First off, there’s no way my max heart rate hit 188bpm on that run – it was a slow run with my dog on very icy and wet surfaces – sometimes we need to be aware that these devices make mistakes.

Very cool stuff, but my questions are:

A) How accurate are these measures?
B) What is the practical significance of this data for a runner like me?
C) How do the data vary with things like speed, terrain, footwear, etc.?
D) What are the normal ranges observed for these data (is there even a “normal”)?
E) If I am way out of the normal range for any of them, is there any compelling benefit to making a change?
D) If I need to make a change, what’s the best way to do so?
F) Is there any risk associated with making a change?

Don’t get me wrong, I’m a data geek, and being able to play with this stuff excites me. One of my goals for the coming weeks is to experiment with the watch and see how the numbers change with various conditions. I also hope to dig into the scientific literature a bit on a few of these variables and see what I can come up with that might be of practical value to everyday runners. But right now they mostly represent a curiosity (maybe with the exception of cadence, which I have a pretty good handle on).

The issue I have with some of the tech coming out is that complex biomechanical information may get overly simplified to the point where it loses meaning, or may actually do harm. To give an example, Techcrunch recently posted and article on the topic of health tech, and in it they feature the new Sensoria Smart Socks. The Sensoria socks contain textile sensors that can measure foot contact location, and they are thus able to give real-time feedback on foot strike (see Sensoria app image at left).

As someone who works in a clinic doing gait analysis, I can see value in a gadget like this (if it works well) for a client a who has a very good reason to consider altering their foot strike and needs something to help keep them on task.

But, my worry is when you see a line like this one in the Techcrunch article: “The Sensoria smart sock correctly diagnosed that I make the runner’s rookie mistake of heel striking, leading to a workout-stopping knee pain.”

I’m not sure I’d call heel striking a “runner’s rookie mistake,” nor do I think we have any strong evidence to say across the board that heel striking is bad or causes knee pain. What’s more, moving from a heel strike to a forefoot strike poses some amount of risk due to the changes in lower extremity loading that occur. Given that runners often tend to be overly enthusiastic (to put it nicely!) with things that promise performance improvement or injury prevention, the opposite result may be just as likely: The Sensoria tells you you’re a heel striker, you actively try to change that quickly because you think heel striking is evil, and you wind up breaking your foot or shredding your calves.

The point here is that if the Sensoria works as indicated, it could be a very cool tool under the right circumstances, but my fear is that in reality it will be a tool used needlessly to get people to change form who would be better off just staying with what works for them.

So, to end this rant, I’ll say that I’m as excited as anyone about the tech on the way. It allows us to measure things (or at least estimate things since accuracy may not be perfect) affordably that could previously only have been measured in a high-tech lab. But, lets not get overly enthusiastic about the stuff we measure until we have a good understanding of what it is telling us and what the practical meaning of such data is.