The Power of Parenting II: A Lesson Learned

As any parent knows, teaching lessons to your kids can often be frustrating. Most of the time, the lessons we teach are either basic life skills (e.g., how to brush your teeth; how to read), or lessons about personal safety (e.g., don’t jump on the dog when it’s sleeping; your little sister is not a Sith, and she doesn’t appreciate being hit by a plastic lightsaber). Sometimes the lessons we try to teach are a bit more profound (e.g., how to be a good person). Unfortunately, we often don’t get any validation that these lessons are being learned. However, every once in awhile your kid will do or say something that makes you sit back and marvel at the effect you can have on the shaping of their mind and behavior. 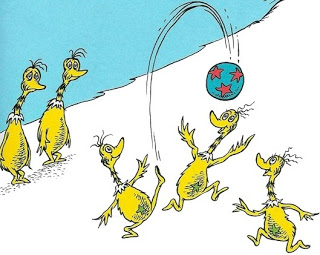 A few weeks ago my son’s and daughter’s preschool taught the kids a bit about Martin Luther King in honor of his birthday. At dinner that night, my wife and I talked about Dr. King with them, and proceeded to show them a clip of the “I Have a Dream” speech on the computer. Thinking that we had an opportunity to teach an important lesson, my wife bought a book about MLK that was geared toward young children, and I read it to the kids a few nights later. We talked about what slavery was, and I could tell that my five year old son thought it was silly that black people and white people had to use separate water fountains in certain parts of the country. We also talked about the historical significance of Barack Obama becoming president. A few weeks passed, and we felt we had at least sowed a seed about the meaning of equality. Then something happened that made me realize that my son really was paying attention, and that this lesson had sunk in.

A few nights ago, I was reading The Sneetches, by Dr. Seuss, to the kids. This is one of my favorite Seuss books since the 4 stories cover a range of topics, and each elicits different emotions. The “Too Many Dave’s” story always gets a hearty round of giggles (think Stinkey and Oliver Boliver Butt), and the “Pale Green Pants” story elicits a little bit of suspense and fear, but not so much that it scares them to death. We have a running joke that Daddy is scared of “Pale Green Pants with Nobody Inside Them,” which prompted both of my kids to search their clothes drawers for green pants to shove in my face one morning.

The deepest of the four stories in this book is The Sneetches. The basic premise, if you haven’t read it, is that some of the Sneetch creatures have stars on their bellies, whereas the others do not. The star-bellied sneetches look down upon those without stars, and exclude them from their parties and games. On one page there is a picture of some young star-bellied sneetches playing on the beach, having a great time (see picture above). Also on the beach are some very sad looking starless sneetches who aren’t being allowed to play. After I read this page to them, my son looked at me very seriously and stated that this was just like what was done to the black people in the MLK book. I was floored by this comment, because it made me realize that he got it. The lesson that we were trying to get across after Martin Luther King Day is that it’s silly to treat people bad just because they look different from you. With this comment, it was clear to me that my son grasped the metaphor provided by the sneetches. For that fleeting moment, I felt like the greatest parent in the world, and I couldn’t have been prouder of my son. This is what parenting is all about, and this is why I don’t buy the argument in Freakonomics that what we do as parents is less important than the genes we provide them. We teach by example. We pass on lessons that we think are important. And every once in awhile we receive validation that a lesson we taught was learned.

You just finished reading The Power of Parenting II: A Lesson Learned! Consider leaving a comment!