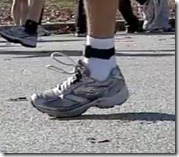 What these categories fail to do, however, is capture the degree of variation that is present on an individual level when considering the complexity of the initial foot-ground interface. What we commonly refer to as a heel strike can come in a number of different forms (e.g., degrees of foot dorsiflexion or upward toe pointing, exact position of contact on the heel), and these likely carry along with them different properties in terms of impact forces experienced, loading rates, etc. Even a midfoot strike, which is much less variable in terms of foot dorsiflexion, can vary highly in the amount of inversion/eversion of the foot at contact.

I’m not going to go into a lot of detail about these subtleties of footstrike here, but rather wanted to post a series of photos captured from high speed videos that were taken by my students at mile 20 of a marathon last year. If nothing else, these photos should give you a good feel for at least a small amount of the variability present in the human running footstrike. You can also see some variability in the degree of flexion at the knee. I’ll touch on the significance of some of these variations in coming posts, but thought there might be interest in seeing these images give the amount of discussion regarding the topic of running footstrike that has occurred in the past year or so.

I’ve roughly ordered these from the most extreme heel strikes all the way down to a single forefoot strike (there is a second, more extreme, forefoot strike in the opening photo of this post), and each photo represents the exact moment where the foot first contacts the ground (these were taken from video recorded at 300 frames-per-second, so point of initial contact could be determined with a high degree of accuracy).

I’d love to hear any thoughts you might have in the comments!