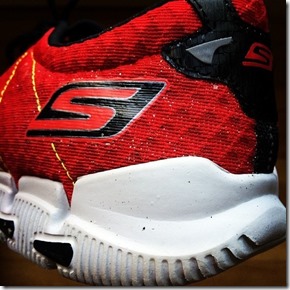 Sometimes you just need to do something a little bit different, and maybe just a bit dumb, in your training.

On Thursday I had 8 miles on my schedule, but wound up running three separate times in three different pairs of shoes for a total of almost 16 miles. It resulted from seizing unexpected running opportunities when they presented themselves – I did my planned five progressive miles in the morning, and my wife wanted to go for an easy four after lunch (kid free!). I figured that would cover the day’s miles. However, later in the day I wound up having an hour to kill between dropping my son off at Taekwondo and arriving at the track to coach my beginner 5K group. The sun had come out, and a new prototype of Meb’s marathon shoe had just arrived before I left the house. The decision was not hard – I put another 6.5 at about marathon pace in the books, a bit faster than planned since I misjudged the distance.

It may not have been the wisest thing to do, but it sure was fun!

Runblogger Posts from the Past Week

Video: David Epstein TED Talk on Whether Athletes Have Gotten Faster, Better, and Stronger
April 30, 2014 – Interesting presentation on the factors that have contributed to increased athletic performance over the years.

Skechers GoBionic 2 Review and A Run Through the Development Process
April 29, 2014 – Nice update to the Skechers GoBionic. A bit more cush while retaining the zero drop option and a super roomy fit.

5 Things I Learned From Running A Trail Race Last Weekend
April 29, 2014 – A bit of a race report, and a bit of gushing on how much fun I had running a long trail race. A few lessons learned mixed in.

The Return of the New Balance MT101 Trail Shoe
April 28, 2014 – One of my favorite trail shoes is making a comeback next year!

Recommended Running Articles from Around the Web

1. Ross Tucker at The Science of Sport posted a thought provoking article on the topic of when intervention is warranted in the case of an athlete struggling to finish a race (prompted by the case of Eliud Magut at the recent Padova Marathon). Lots of good science mixed in with a discussion on whether we should relax rules about intervention/assistance leading to disqualification in races. Says Tucker: “What should be allowed is for the athlete to receive some support very early on – the collapse you saw in the clip comes at the end, and can be predicted many minutes in advance.  When that happens, the athlete should be able to speak to a medical official, possibly receive some assistance that does not actively move them to the finish line…” 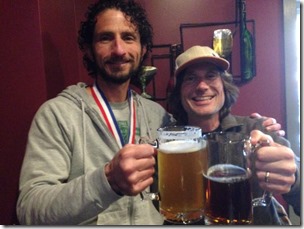 2. My good friends Nate Sanel and Ron Abramson ran the Lake Waramaraug 50K (Nate) and 50 mile (Ron) races last weekend. Nate ran a huge 50K PR in the race – read his race report here. Ron recaps his experience guiding a blind runner in Boston and then running the 50 miler the following weekend here. I particularly like the following line from Ron’s post: “That’s when I said, to no one in particular, ‘Oh shit, my balls!’, as I saw that delicious pair roll downhill towards the lake.” You’ll have to read his recap to learn what happened.

3. Todd Kenyon at ttbikefit.com posted some nice slow motion footage of the top women at the 2014 Boston Marathon and discusses variation in their form. Interesting stuff!

4. The 2014 Boston Marathon was an amazing event with an amazing finish. I wasn’t there myself, but could feel the energy from afar. However, I feel like more energy was spent attacking those people who faked their bibs to run the race than celebrating all the good that happened that day. A lot of people have asked me how I felt about that. I absolutely think that it’s a crappy thing to do. I’ve never bandited a race and I don’t approve of what they did given that Boston had made it clear that bandits were not welcome this year (banditing Boston is commonplace and tolerated most years, particularly among local college students, but not this year due to expected large crowds and security concerns). But, I was also a bit shocked by the amount of indignation, contempt, and public shaming that resulted. Report them to the BAA and be done with it. In the end, Miss Zippy said it better than I could have: “We all live in glass houses. We’ve all made errors in our lives. Maybe we shouldn’t be spouting righteous indignation all over the Interwebs. At the end of the day, is it our role to serve as judge and jury of these folks? They have to live with their actions and I’m betting right about now, not a one of them is feeling too good about themselves. Can’t we leave it at that?”

You just finished reading This Week in Runblogging: 4/28-5/4! Consider leaving a comment!