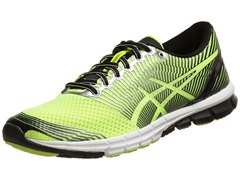 This week I reviewed the Asics Gel Lyte33 v3, which is a pretty nice shoe if you like a soft feel and a roomy toebox, though my pair has kind of a lumpy forefoot (seems somewhat variably present based on those who have commented). I also wrote a couple of posts about workouts on the track (near all-out 400s are hard!), including some interesting observations on cadence changes with running speed.

Finally, Trivillage has offered up a Garmin Forerunner 10 for a Runblogger giveaway – entries are being accepted until Thursday, July 3rd if you’re interested in participating (go here to submit an entry)!

Shoes I Ran in This Week

Runblogger Posts From The Last Week

Giveaway Contest: Win A Garmin FR10 GPS Watch from Trivillage
June 27, 2014 – One of my favorite GPS devices, mainly because it’s simple and gives me what I need for 90% of my runs.

Observations on Cadence Change With Running Speed on the Track
June 26, 2014 – Showing again that my cadence changes with pace, but that I tend to have a higher cadence than elites even when running at a much slower pace.

Running Posts From Around The Web

1. Nice article from The Atlantic titled “Why Aren’t Running Shoes Preventing Running Injuries?” I like this quote from Brian Metzler:  So do runners need align themselves as fervent believers of minimalism or maximalism? “No,” Metzler says, “I believe that a runner can have several different shoe types, each with a specific use.”

2. Though evidence to date suggests injury rates are similar between traditional and minimalist shoes, it seems likely that types of injuries in the shoes may differ based on differences in force application/distribution. Metatarsal stress fractures are one injury that seems to be common in those transitioning to minimal footwear, and Craig Payne writes about a study that shows that running in a minimal shoe increases plantar pressure under the forefoot. This could explain the increased stress to the metatarsal bones. My take is that stress is bad if taken too the point where the bones are unable to adapt quick enough and they break, but could alternatively lead to strengthening if a gradual and progressive approach is taken. It would be interesting to see an MRI study of metatarsal bone structure over a long-term adaptation to minimal footwear.

3. DC Rainmaker put together a guide to the best fitness gadgets of the year so far. Very much agree with him about the Garmin 620 and the new Garmin FR15. I need to get my reviews of both up!

4. Great post by Heather Gannoe titled “You Don’t Have To Race.” She writes: “Unless you are an elite or aspiring elite who makes your living off of racing, training for and running a race should be something YOU really want to do. Not for anyone else, not for bragging rights, but for YOU.” Couldn’t agree more. 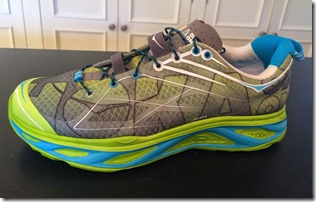 5. The first reviews of the new lower profile Hoka shoes are starting to roll out. Sam Winebaum and Ben Luedke both take a peek at the Hoka Huaka.

6. Miss Zippy writes about her journey from heel to midfoot/forefoot and back again: “Like many runners, I jumped on the natural running bandwagon a few years back. And I am still a believer in less shoe, aiming to land under your center of gravity, and landing quietly with a high cadence. But I think when I changed my form I put the focus on changing from heel striking to mid foot striking, and then got lazy and didn’t do much else. Which wasn’t the right way to go about it.”

7. Jason Fitzgerald writes about the 5 Traits of a Good Running Coach. I agree with pretty much everything he writes. Having done some coaching myself the past few years, I think it’s important to work with someone who is experienced enough to help you achieve your goals. It’s for that reason that I’ve only chosen to work with beginning runners, those coming back from injury, and those looking to run a first race at a longer distance. I’m confident that I can help people in those groups. But, I also know my limitations as someone relatively new to coaching, and for someone more performance oriented I’m happy to suggest they work with someone like Jason, Caleb Masland, or Jeff Gaudette instead.

8. Another good post on summer running, this one via HillRunner.

You just finished reading This Week in Runblogging: June 23 to June 29 2014! Consider leaving a comment!