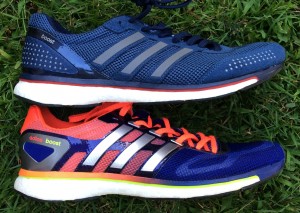 This week I reviewed the adidas Adios Boost 2. Version 1 of the adios Boost was one of my favorite shoes from last year – it provided a smooth, responsive ride that was capable of handling a variety of distances and speeds.

I’m a fan of the Boost midsole material as if provides a soft, yet springy feel under the heel, but remains firm and responsive where it is thinner under the forefoot. The adios Boost 2 provides the same great ride, but the upper and fit have changed a bit so sizing is a bit different. Check out the review for more!

Spaulding Rehab in Boston is Looking for Barefoot/Minimalist Runners for a Research Study
September 18, 2014 – If you live in the Boston area, run barefoot/minimal, and want to participate in a research study, check this out!

adidas Adios Boost 2 Review: Same Great Ride, Different Fit
September 15, 2014 – One of my favorite shoes this year once I got the sizing sorted out.

1. Now that it’s getting darker earlier, I did one of my first night runs in a long time last week. There’s something special about running at night, and I’d forgotten how much I enjoy it. Andy Jones-Wilkins expands on the topic of night running on iRunFar. He writes: “One thing I have realized on my night runs is that the world around me seems to shrink. I am alone with my thoughts and the beam of my headlamp on these night runs. There are no external distractions to get in the way and therefore I can get into a steady zone of just running that can be at once cathartic and meditative. It may sound odd to some but running in the dark just seems a bit more clear than running during the day.”

2. Two good posts on Runners Connect on the topic of foam rolling. First, a post titled “4 Mistakes You’re Making When Foam Rolling (and How to Fix Them).” Second, a post assessing the science supporting the potentially beneficial effects of foam rolling.

3. DC Rainmaker has a cool post about the BSX Insight, a device that slides into a calf-compression sleeve that can estimate your lactate threshold without the need for drawing blood.

4. Interesting post on Running Physio describing a study that compared a strengthening protocol to a stretching protocol for the treatment of plantar fasciitis. I’ll have a post with some comments on the study later this week.

5. Nice post by John Sheppard of Take It On The Run on what he learned from volunteering at an ultra.

You just finished reading This Week in Runblogging: September 15 to 21 2014! Consider leaving a comment!