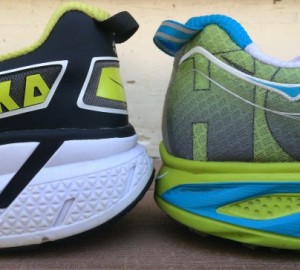 Last week I took a look at the Hoka Huaka. It was my second experience in a Hoka shoe (I reviewed the Hoka Clifton a few weeks ago), and this one was a better match for my stride. Compared to the Clifton, the Huaka provides a firmer, more responsive ride with a less rockered sole. In other respects the shoes share a lot of similarities, including a similar upper and fit (the Huaka may be a tad narrower). If you want to try a Hoka and don’t like super-soft soles, the Huaka might be a good spot to start.

1. Just when you thought articles debating barefoot vs. shod running had run their course, along comes another from The Body Sphere on ABC.net.au. “Just like in art, there are movements, or ‘-isms’, in running. There’s minimalism and there’s maximalism, and these terms refer to what you do, or don’t, put on your feet. Working out how to find your way through the ‘-isms’ and the claims and counter-claims that have been made for various types of running shoes, or running with no shoes at all, is confusing to say the least. So how much of a difference do shoes or the lack thereof make to your running?” I’m not sure the article answers the question, but it’s worth a read.

4. Couple of shoe reviews: Running Shoes Guru provides an alternative take on the Hoka Huaka, and Runer4Lyfe takes a look at the Altra The One2.

5. A post on resisting the urge to run while recovering from an injury on Ann’s Running Commentary

You just finished reading This Week in Runblogging: September 29 to October 5 2014! Consider leaving a comment!