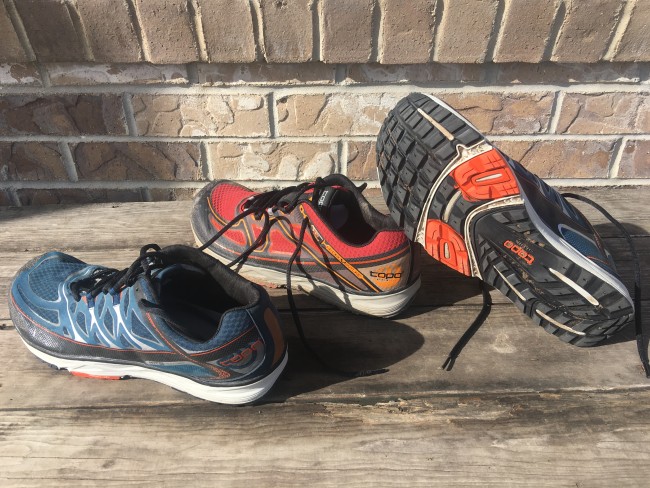 I’ve running in Topo’s shoe offerings since the inception of the brand.  My general experience has been good, with an appreciation for the concepts they were trying to get across and the approach they took. However, the execution felt just a little lacking, with some materials not as refined, and the ride not very notable.

Topo’s 2015 lineup started to change this a bit, particularly in the uppers, and is reflected in my review of the Runventure. Topo seems very keen on listening to feedback and quickly improving their shoes. I expected some incremental improvement with the MT-2 and Hydroventure, but what I found were some very large refinements across the board that elevate the Topo trail lineup from cool ideas from a new brand, to legitimate trail offerings. I’ve been a fan of Topo for a while, but just couldn’t honestly say the overall experience was one I could recommend.  That’s pretty much turned around with these two models, and I’ll explain why below. 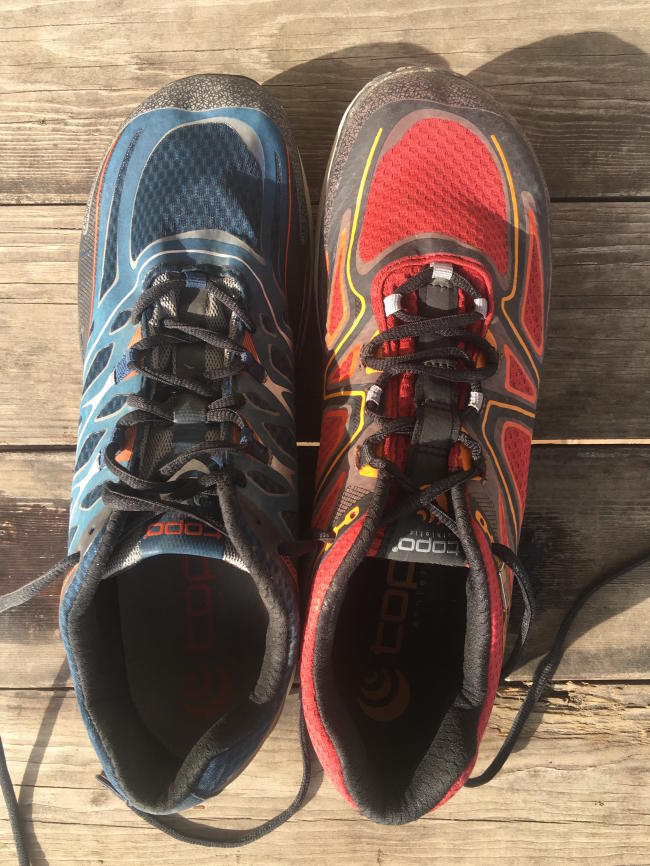 Great overlays and fit on both of them, with good toebox room and secure midfoot and heel.

As I stated above, Topo’s uppers really came a long way in 2015 with shoes like the Runventure, Magnifly and Tribute showing large improvements in the construction, materials, and overlays on the uppers. The MT-2 and Hydroventure continue this refinement in different ways.  The only downside to the Runventure upper was that it had a pretty thick, 3/4 length lining in the interior.  While this was nice from a comfort standpoint, in warmer weather the shoe ran a little hot.

The MT-2 completely alleviates this issue with nearly 70% of the upper unlined (all but the heel area), and a very thin and breathable mesh.  What I’m most surprised about is how they managed to get a good, secure fit with such a thin and light mesh.  My conclusion is that this is due to the fantastic overlays, which they combine to entirely rand the shoe, plus secure the midfoot to the lacing, all in what appears to be either one seamless overlay layer or a few very thin layers (continuous if that is the case since I can’t see transition areas).  The end result is the upper is extremely flexible and comfortable, while still being breathable and supportive. 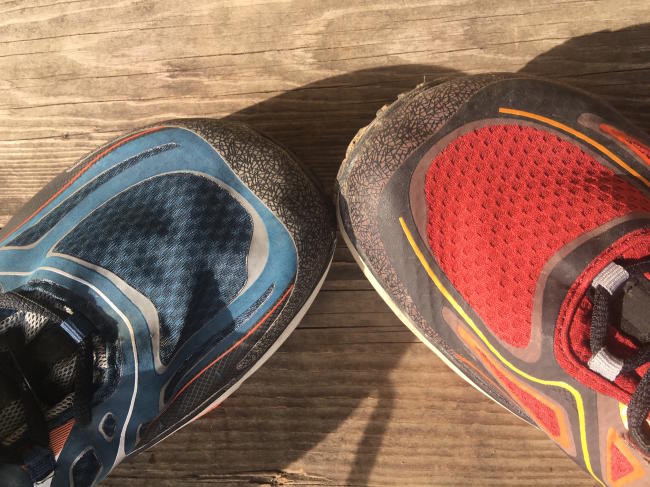 Same mesh as far as I can tell, with Hyrdoventure (red, on right) having the DVdryLT eVent material laminated to the back.

The Hydroventure upper is an entirely different type of improvement.  It uses the same outer mesh and overlay approach as the MT-2, but adds an DVdryLT eVent, one piece upper. While not a waterproof outer shell as much as the Altra Lone Peak Neoshell, it is still a true one piece waterproof upper, unlike the bootie type designs of nearly any other waterproof shoe. The great part of this is that the upper is really not any thicker than a normal shoe, and can be constructed the same as a normal shoe. This makes the fit much nicer than nearly any other waterpoof shoe I’ve run in, even better than the Altra Neoshell simply because the Topo last is much more secure in the midfoot and heel than the Altra.

The only downside to the Hydroventure upper is linked to its upside.  It runs warm in any temps over 35-40 degrees, but as a waterproof shoe, this is almost unavoidable and also a benefit usually in the nasty weather where a waterproof shoe is more useful anyway. Additionally, this upper construction method lends itself to an extremely light overall shoe weight over GTX shoes. The Hydroventure is definitely the lightest waterproof shoe I have and, according to my own measurements, comparable to almost any other normal trail shoe in weight – for example, it is as light as something like the Nike Kiger 3.  Very impressive! 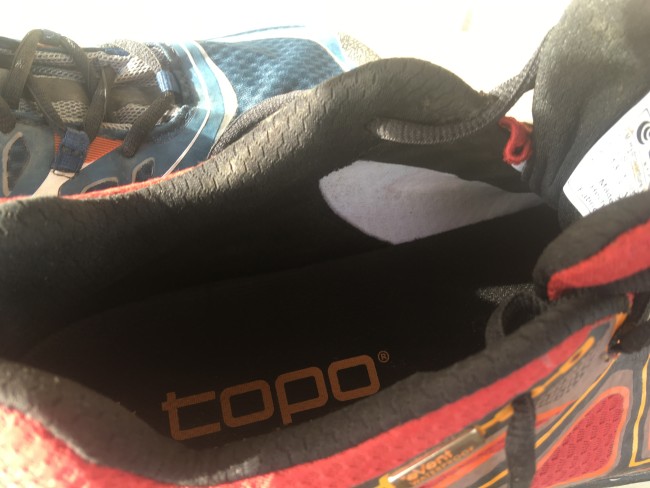 Hydroventure interior is simple, and just like regular shoe construction, despite being waterproof.

The fit overall is much improved on the MT-2/Hydroventure (same last on both). The midsole is slightly narrower at the arch, and this contributes to a better fit in the midfoot for me over the MT and Runventure. The footbed is also changed, and completely different from other Topo models. Instead of a thick/stiff two piece footbed that felt dead to me, Topo replaced it with a lighter, softer one piece foot bed that just feels much better. Additionally, I feel like the last overall is just a bit more refined in fit, and I get a better fit in the toebox and midfoot than other Topo models without the bunching and more baggy fit of the original MT. The MT-2 and Hydroventure are two of the best fitting shoes out there with a wide toebox and secure midfoot/heel. 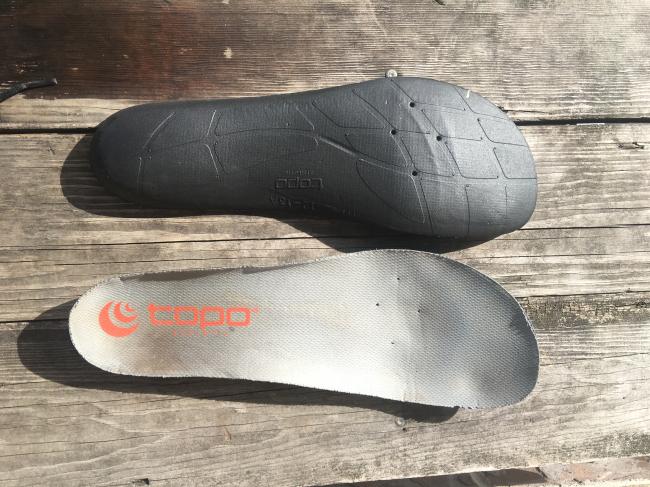 While the uppers are much improved in these shoes over previous Topo models, the midsoles improved even more. The Runventure and original MT both felt dead to me. While the midsole was there and protected your foot a little, it added no life or “feel” to the shoe.  I’m happy to report that the MT-2 and Hydroventure midsole (same mold/shape and I believe firmness) is not only a little more protective, but also much more responsive and lively.  I ran a few different runs in the MT-2 that included some tempo work, with even one interval on pavement, and the shoe really didn’t even feel like a Topo to me.  I would have been very uncomfortable running that same run in the Runventure, and yet the MT-2 was not only enjoyable, but worked as good as many road shoes would, and much better than tons of trail shoes.  They have a very versatile ride that handles smooth/hard terrain, but also is competent on more technical trail due to the lower stack height and trim cut to the midsole and outsole. 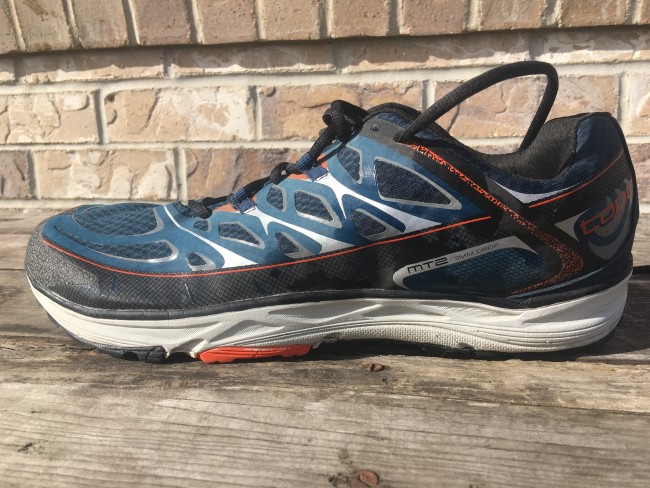 Great new midsole design that adds 3mm to forefoot stack height of original MT/Runventure design, and offers a slightly softer and more responsive feel. Additionally, midfoot is a bit narrower which leads to a better fit in the arch for me.

One key difference with the Hydroventure is that Topo put in the same rockplate as in the Runventure, which gives it a more protective, and slightly firmer ride. By contrast, the MT-2 has no rockplate, and is much more flexible in feel, but also a bit softer and less protective.  I’m kinda torn between the two rides since the Hydroventure ride would be much better for longer runs/races, but I like MT-2 upper, being light and breathable, so kind of wish the MT-2 had the Hydro rockplate, even though I still like the flexible nimble feel of the MT-2 without it for shorter runs; maybe Topo will offer both someday (fingers crossed )?

The MT-2 and Hydroventure outsole are the same and, in fact, are also the same as the original MT and Runventure. This isn’t necessarily a bad thing since it is a very versatile outsole that handles a wide variety of terrain and surfaces very well.  Additionally, it is quite durable and light too. For the MT-2, I think the outsole is nearly perfect, however, for the Hydroventure it may be a little under-lugged, since that shoe, being waterproof, is normally going to be used in much nastier conditions like mud, snow and rougher mountain terrain. In this case, I think it could really benefit from a bit deeper lug, which would also help differentiate it a bit more from the MT-2 (and make room for an MT-2 with the Hydroventure rock plate :)). As it is, the current outsole is quite good, and thus the Hydroventure makes a good winter road-to-trail shoe, and also functions well on regular trail in cold conditions. 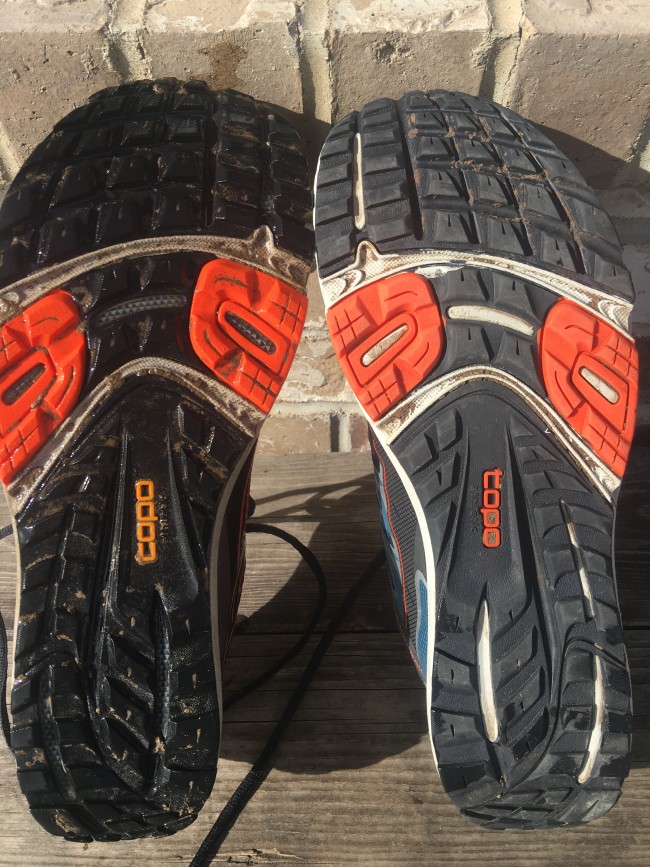 Same outsole. Notice rockplate exposed in both forefoot and heel (two piece TPU plate) of Hydroventure on the left.

All in all, I’m actually somewhat blown away by how much the new Topo models have improved. If these two shoes are any indication, there are some good things coming down the pipe from Topo.  The MT-2, particularly since it retails for $100, is probably one of the best values in the lightweight trail market, and is extremely versatile. The Hydroventure is one of the more reasonably priced waterproof models, while also the lightest and probably best fitting waterproof model out there due to the great DVdryLT eVent design. I’d wholeheartedly recommend the MT-2 for anyone that runs trails and likes a light and lively shoe, and I’d recommend the Hydroventure as a general waterproof shoe, particularly notable for its light weight and for those that like the MT-2 but want a bit more protection. Great stuff Topo!

The Topo MT-2 and Hydroventure are available for purchase at Topoathletic.com and Amazon.com. The MT-2, but not the Hydroventure, is available at Running Warehouse.