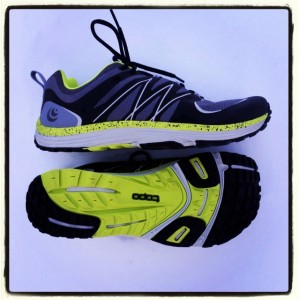 Last year Tony Post made a bit of a splash when he left his position as CEO of Vibram USA to launch his own footwear company. Post led Vibram through a period of time when the Fivefingers line of “toe-shoes” were red hot, and left just as VFF sales seemed to be headed off a cliff. His new company, named Topo Athletic (a combination of the first two letters of his first and last name), put out it’s first round of footwear late last year, and I have to say I wasn’t terribly impressed.

The initial shoes in the Topo lineup all featured a split-toe, Tabi-style design (see Topo RT image below). There isn’t anything necessarily wrong with a split-toe shoe, but I think most people could see that the toe-shoe concept had pretty much run its course, and a Tabi-style shoe was going to be a tough sell as a mainstream product. Topo did send me a few pairs of the initial shoes, but I was a bit surprised to find in them a mix of features that were going to alienate most of the footwear world. Mainstream runners aren’t going to go for Tabi shoes. Minimalist runners are much more likely to bite, but the shoes had a very strong sensation of arch support, which is an anathema to most minimalists. And the soles were far from minimal. 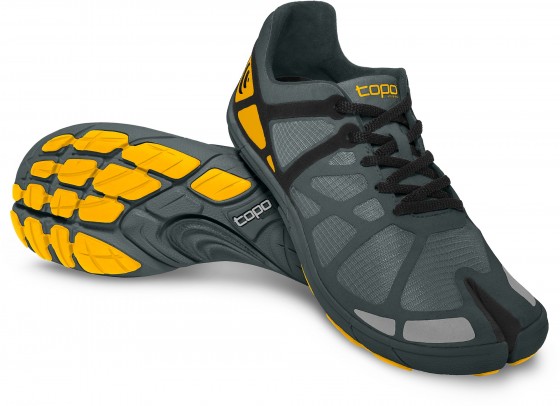 “…some of our shoes are lightly posted on the medial side of the heel, perhaps that’s what you felt. There is no arch support in the shoe, it’s simply an EVA midsole contoured to follow the natural shape of the foot. The light medial post may not be felt by everyone (noticed more by those with lower arches or flat feet), it doesn’t prevent you from using the muscles in your feet or arch during running or standing, in fact some find it a gentle reminder to do so.”

“We make level or near level platforms (no more than 3mm drop) because we think that encourages better posture and a mid-foot strike during running. No offense to anyone, but I was talking about this long before ALTRA was born ;)”

I have pretty high arches, and I can definitely feel a strong sense of pressure along my arch in the Topo RT shoes. It’s particularly noticeable just medial to the front of the heel. Whatever you want to call it, posting or arch support, it’s a sensation that I’m guessing would be a huge turnoff to most diehard minimalists (who are the one’s most likely to try a Tabi shoe!). The RT also had a fairly thick sole, and Topo openly admitted that they were not trying to be a minimalist company. Given this mix of cushioned sole, arch supporting feel, and split toe, I’m not shoe who the target demographic for the shoes – the niche had to be very, very small.

I don’t have any sales data for the original Topo shoes, but my guess is they have not sold well. I’ve heard very little chatter about them, and have not been asked about them by readers. Add on top of that the fact that Topo just released a line of shoes that ditch the split toe and I think the data support the notion that the Tabi design was a mistake (even though Post says they plan to retain the Tabi models in their collection).

Topo contacted me several weeks ago to ask about my experience with the initial shoes. I was honest and told them I hadn’t even run in them, and that I wasn’t crazy about the Tabi design. With so many shoes to review in my queue, I didn’t want to spend the time to run 20-30 miles in a shoe that did not appeal to me in appearance or feel, and that I thought was going to be a bust. They indicated that they understood the Tabi was polarizing, and wanted to know if I’d like to try one of the new non-split toe designs instead. Feeling guilty about not running in the RT, I agreed to try out the new Topo MT.

So why the long, Tabi-centric intro to a review of a non-Tabi shoe? Because I think this is a case where a bad initial decision has given way to a wise change of direction and a pretty darned nice shoe: 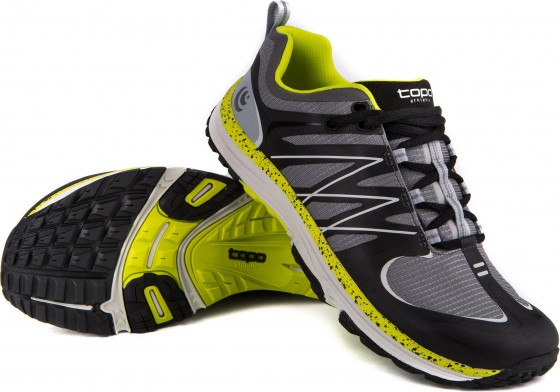 I’ve had the Topo MT on my feet a lot over the past 3-4 weeks, and I’ve been very impressed with them. Read on to see my detailed thoughts.

The upper of the Topo MT is really, really nice – one of the best I’ve seen in awhile. Topo shoes appear to be very well crafted across the board, so quality seems to be very important to the company. The upper is composed externally of a layer of tightly woven mesh with a lot of overlays to add support. The toe-cap is reinforced by a flexible overlay, and this extends backward through the flex points on both sides. A lot of shoes seem to tear at these flex points, so hopefully the overlays will assist in preventing that.

Some other features of the upper:

-The tongue of the MT is gusseted for about 2/3 of it’s length to keep debris from slipping in – it’s a thin tongue but has a bit of cushion built in.

-There is no plastic heel counter in this shoe, but the overlays on the heel are a bit thicker to provide structure.

-The internal lining of the ankle collar is padded, but not excessively so (more than the Merrell Ascend Glove, less than the Inov-8 Trailroc 235 – these are two of he closest competitors to this shoe).

-The internal lining of the upper is impressively comfortable. I often see the term “seamless” used to describe uppers that really are not seamless, but the lining of the Topo MT is truly seamless all the way to the level of the ball of the forefoot. It’s a very comfortable shoe. I haven’t run sockless in them yet (too cold up here) but I see no reason why that would not be an option in these shoes. 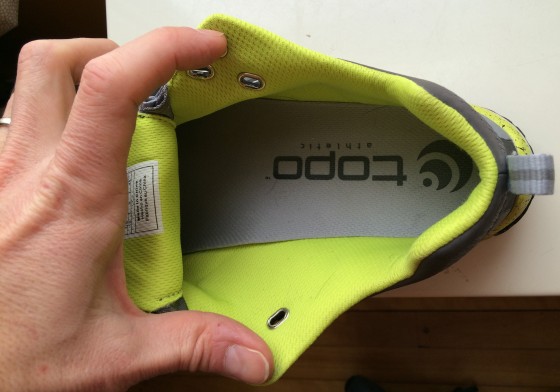 One tradeoff to having a soft, almost full-length internal lining is that it impedes drainage and tends to absorb water. I ran in a steady, cold rain a few weeks ago and hit ankle-deep puddles on multiple occasions – the shoes absorb water and do not shed it quickly. Lots of squishing until the water manages to work it’s way out. Made for some cold feet that day!

The Topo MT weighs in around 9oz in my size 10, largely because the sole is well cushioned and protected. They are a 2mm drop shoe with a stack height of 19mm at the heel and 17mm at the forefoot. Most of my running has either been on asphalt or on crusty ice and snow, and I find the cushioning firm but not rock-hard. I wish I could comment on how they feel on a warm, dirt trail, but that’s unfortunately hard to come by this time of year in NH. I’m not clear if there is a rock plate in these shoes, but protection has been more-than adequate on the surfaces I have run on so far – this is probably due to a combo of the rubber outsole and moderately cushioned midsole.

The full-length outsole of the Topo MT is lugged, but the lugs are low an flat. As such, traction in these shoes is decent but nothing special. They do ok on crusty ice, but not so good on fresh snow or smoother ice surfaces. My guess is they’d be fine for light trail duty, but are not going to give much traction in mud or on wet, slick surfaces.

One big positive about the Topo MT is that the sensation of strong arch support that I felt in the RT is gone. There is some arch contour, but no strong feeling of pressure. The 2mm is barely noticeable, feels and runs like a zero drop shoe to me, and my calves even got a little sore after my first few runs in them (probably due to my recent series of 9-10mm drop shoe reviews – out of practice!).

The other big plus for the MT is that the toebox is very roomy, both in width and vertical volume. My toes have a ton of room to move around in these shoes. The fit is snug through the heel and midoot. Overall they are an incredibly comfortable shoe and one that I often grab for all-day wear (wore them for a day walking around Boston last weekend – feet were quite happy!). 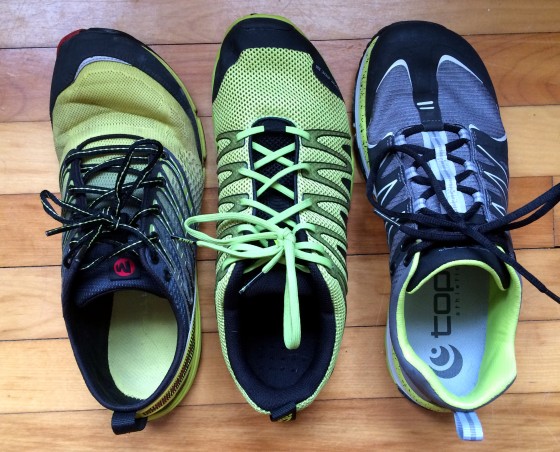 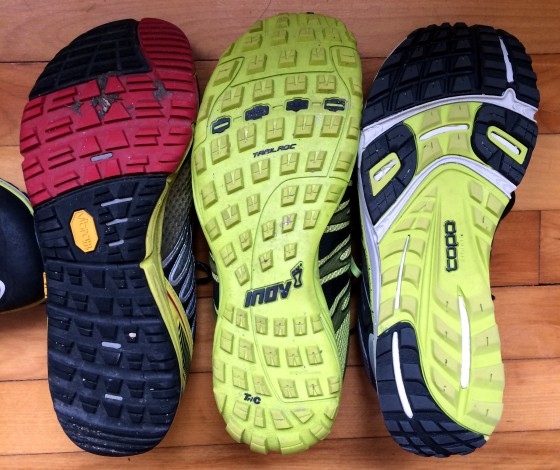 The Topo MT is a very versatile shoe. It’s not so luggy that you can’t use it on the road (have had no issues myself using them on the road), and it provides adequate traction for light trail running. If I had to identify the nearest competitors to this shoe they’d be the Merrell Ascend Glove, Inov-8 Trailroc 235/245, and Altra Superior. All of these are great shoes, but quite honestly, among these four I think the Topo MT might be my favorite simply because the upper is so nicely constructed and so comfortable. If good drainage were critical I might look elsewhere, but the Merrell Ascend lacks cushion lining the ankle collar (skin at back of my ankle doesn’t like that), and I’ve heard too many durability complaints about the uppers of the Trailroc 235 and Altra Superior (the update to the latter is about to be released, hopefully the new upper will perform better).

If you’re looking for a solid hybrid shoe with moderate cushion, a roomy toebox, decent protection, and ability to perform on both trails and roads then the Topo MT is definitely worth a look!

Currently the Topo MT is only available at REI. I’ve heard that it will be released more broadly after February 1.