Trail Running Shoes To Keep An Eye On in 2015 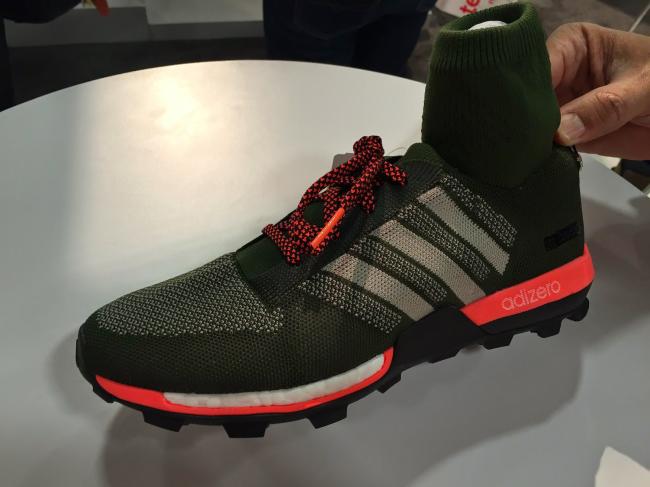 1. adidas adizero XT/Prime Boost, Summer 2015 – The XT has been in adidas’ trail lineup for a little while, and though it is designed to be a lighter trail shoe (usually the lightest in adidas’ typically more bulky trail lineup), I think they have fallen short of that a bit until the latest XT 5 (see #6 below; it feels more like a trail version of the adios).  The newest XT looks to continue that trend and adds Boost, full Continental rubber, and even offers a Primeknit version that I’m really looking forward to trying. The latter is of particular interest to me since I like to run sockless, and many of adidas’ shoes tend to use stitched overlays and not always the softest mesh.  Check out Sam Winebaum’s full writeup on them here.  The Raven Boost and Response Boost that Sam has pictured also interest me, but details are sparse and they look to be heavier shoes. 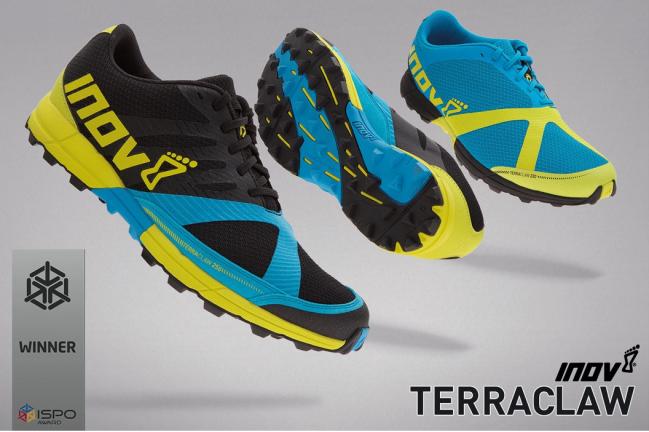 2. inov-8 Terraclaw 220 (4mm drop) and 250 (8mm drop), Summer 2015 – The Trailroc line has been a staple for inov-8 in the last couple of years. It’s also one of my personal favorite lines from the brand and I’ve used them in many races.  Word is the Trailroc line is being phased out this year and is being replaced by the new Terraclaw 220 and 250. While this may be bad news for many, I think there may be room for some hope.  If inov-8 can pull it off, I think the Terraclaws may well surpass the Trailroc in versatility as they will add a little more cushion, while still giving some structure with a Dynamic Fascia Band shank as well as an outsole that will handle more technical routes without getting super aggressive like the Mudclaw or X-Talon line.  The upper designs may prove to be the greatest improvement though, with the 220 (4mm drop) being the most ambitious with a unique asymmetrical short-laced design and the 250 (8mm drop) retaining a more standard lacing setup.

3. inov-8 Race Ultra 270, Available Now – I was pleased with the Race Ultra 290 when I tried them last fall, and was therefore very much looking forward to the lighter and lower  drop (4mm) RU270.  I bought a pair and I’ve already raced 50k in them and am pretty impressed overall.  A very versatile shoe with more road shoe-like geometry than the Trailroc 245, but with nearly all of the latter’s positive qualities retained with a touch more cushion at a very similar weight.  Quite the feat I think and one that, especially if the Terraclaws mentioned above turn out good, will make the loss of the Trailroc much easier to bear.  The Race Ultra 270 covers hardpack terrain (and even road) much better than the Trailroc and yet still handles technical trail quite well.  If you liked the Trailroc 245, be sure to check this one out.  Full review coming soon.

4. Nike Terra Kiger 3 and Wildhorse 3, Summer 2015 –  I know they are coming, but don’t have much info at this time.  I’ve heard, but not confirmed, details of the Kiger remaining as the speedy shoe in the line with a 4mm drop and re-worked outsole and slightly different upper. The Wildhorse 3 is supposedly moving to 8mm drop with an added rockplate on a somewhat redesigned outsole.   Update: Running Warehouse recently posted preview videos of the Wildhorse and Kiger 3 – you can see them below: 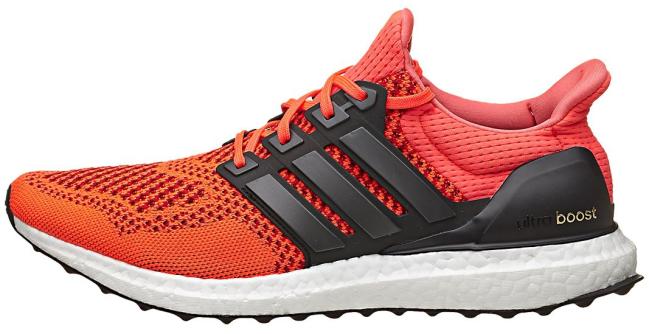 5. adidas Ultra Boost, Available Now – I initially scoffed at the Ultra Boost when I first saw the launch and promotional materials.  With the launch of Boost a couple years ago, I was pretty skeptical and a bit turned off by adidas’ aggressive marketing and overblown claims. However, since trying many of the Boost shoes to hit the market in the last 6 months, I have to say I’m pretty impressed with the Boost material.  It is at the same time soft, responsive and durable; attributes that don’t usually go together when talking about midsole compounds.  Well, the Ultra Boost has more boost (20% according to adidas, compared to Energy Boost I’m assuming), a stretch web outsole and a Primeknit, booty-style upper.  I’ve taken them out for a 10 mile run out of the box and the springy boost ride is very noticeable, but also very forgiving and the shoe is quite flexible.  The upper is what really shines to me, especially for ultramarathons, as it is mostly a soft knitted material mid to forefoot with a very soft and low heel collar area.  What this translates to is a shoe that will be very comfortable even late in long races.  I think it will handle moderate trails just fine as well. They run and feel like I wished a Hoka did. Much more flexible, not rockered, and a significantly more comfortable fit which is key for a more heavily cushioned shoe since I would look to them more for longer runs or late in races. When your feet are tired the last thing you want is a stiff, uncomfortable, or narrow fit.

6. adidas adizero XT 5, Available Now – As mentioned above, the adizero XT has tried to fill the lightweight spot in adidas’ (rather sparse IMO) trail lineup, but has fallen short in the past.  The XT 3 was pretty chunky and the XT 4, while having promise, was weighed down a bit by a pretty heavily lugged outsole.  The XT 5 goes back to what has worked in the road market for adidas, which I wish they would do more often, and comes away as a trail version of the pre-Boost adios (adios 2) since it still uses adiprene instead of the more recently popular Boost.  The nice thing, however, is they retail for $100 and keep things simple without cutting any corners.  I’ve  just recently run in a pair and came away super impressed with the very light and responsive ride.  It feels how I always wished the New Balance 100 series felt…marathon shoe geometries with some decent trail rubber. Only issue I’ve seen is limited availability.  I had to order mine directly from adidas here and haven’t seen them much elsewhere in the US.  Possible review forthcoming. 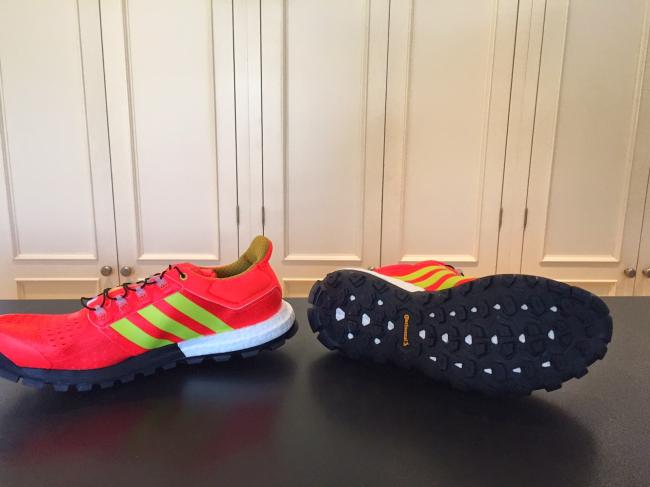 7. adidas Raven Boost – While a shoe in this spec category (11.5 oz and 10mm drop) would not normally be on my list, I’ve been reading good things about it from Sam Winebaum here and elsewhere and love the simplistic design of both midsole and outsole using quality materials (Boost and Continental rubber) and what looks like a nice, soft and comfortable upper.  Adidas really looks to be stepping up their game in the trail market this fall which has me excited. 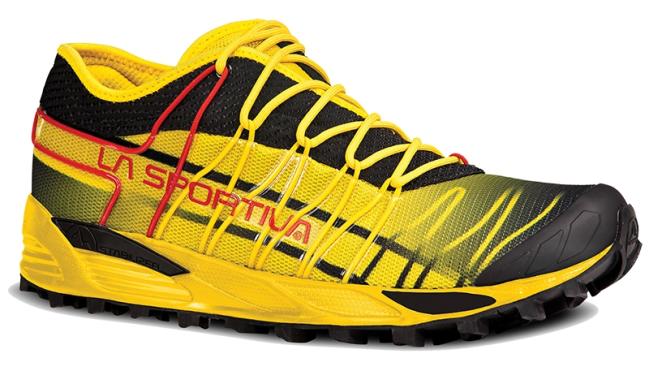 8. La Sportiva Mutant, Spring 2015 – I’ve always liked La Sportiva’s design, philosophy, and aesthetic, but unfortunately haven’t always liked the shoes in practice other than the X-Country (now discontinued), Bushido, and to some extent the Crossover GTX for winter (original version, haven’t tried the 2.0).  The Mutant takes a lot of what I like about La Sportiva (sticky rubber, mountain specific design) and possibly adds a more comfortable upper to the equation with what looks like a slightly wider last.  I’ve really wanted to like many of their other models but either found them far to heavy and stiff or too narrow (Helios in particular).  Interested to try this one on to see if La Sportiva can finally put it all together in an all-out mountain shoe.

9. New Balance MT910v2, Summer 2015 – New Balance was the brand I was first rawn to back in 2010 when I started running in earnest, and the then MT100 and later MT101 were mainstays in my lineup for the first year or so of my running.  I ran a fair bit in the MT110v1, but since then I have been fairly unimpressed with NB’s offerings, especially on the trail front.  I have hope that this will change with the new MT910v2, which is a full top to bottom update to the 910.  I assumed the 910 last year was basically a lower budget Leadville 1210 (they were very similar spec-wise including the same last). The updates that NB has put into the 910v2 should help differentiate it from the 1210 with a more aggressive outsole, rock plate, and they’ve put it on the PL-8 last for a more performance fit instead of the UL last (higher volume) that the 1210 is on.  RevLite midsole is a single piece, 10mm forefoot/18mm heel.  It will be interesting to see how it rides, but I like the simplicity in the design in both the outsole and midsole and it looks to be both durable, protective and nimble at the same time.  Hoping it runs that way too! 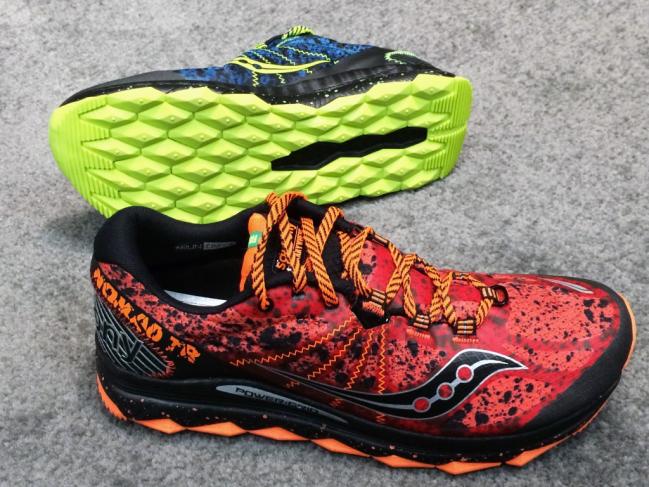 10. Saucony Nomad TR, Summer 2015 – I’ve run in a couple versions of the Saucony Peregrine a couple years back and tried on the Kinvara TR, but Saucony’s last shape has always been a tad too straight and pointed for my tastes.  Apparently the Nomad TR is on a new, more anatomical last and I like the looks of it overall.  At 9.2 oz, it should be a lighter weight option similar to a NB 980 trail, and it’s the best looking trail shoe that Saucony has put forth in a while. 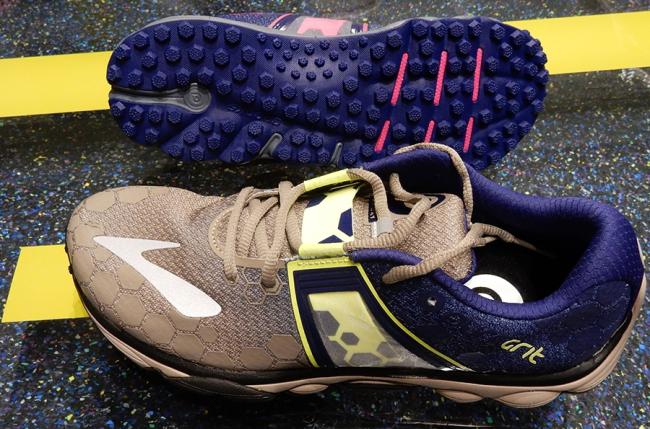 11.  Brooks Pure Grit 4, Summer 2015 – I tried on the Pure Grit 3 when it came out last year and liked everything about it but the high volume upper fit…it was so roomy that I couldn’t even tie the shoe as tight as I needed in the midfoot.  The midsole and outsole seemed like a great balance between light and substantial with a good level of firmness in a shoe with that amount of cushion.  The Pure Grit 4 is unchanged in the midsole and outsole, but gets a brand new upper that looks really nice with a seamless design and lower volume.  Looking forward to trying it out.

How about you, which trail shoes are you most excited about this year?

You just finished reading Trail Running Shoes To Keep An Eye On in 2015! Consider leaving a comment!