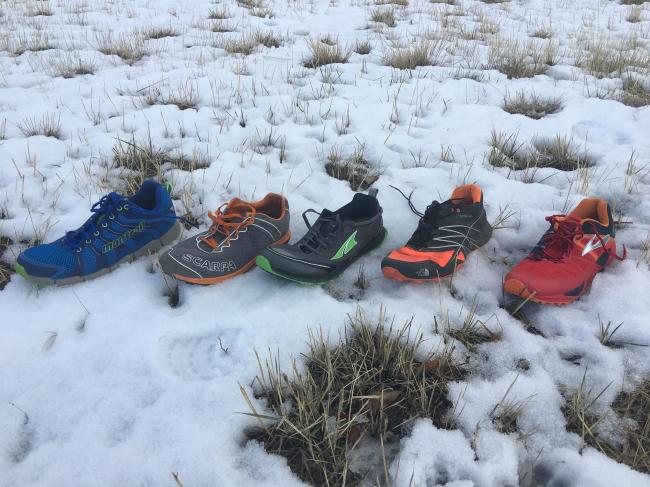 I’ve had a chance to try a lot of new shoes over the past year, and while this is usually great, it sometimes compromises how much time you can get in each shoe. The following shoes are all trail models currently on the market that I ran in last summer and fall but never got the chance to do a full review of. There were some redeeming qualities in each of them that I felt were noteworthy enough for a post, so what follows is more of my impressions of the shoes rather than full reviews. All specs via Running Warehouse unless otherwise noted. Disclosure: These shoes were provided free of charge by their respective manufactures. 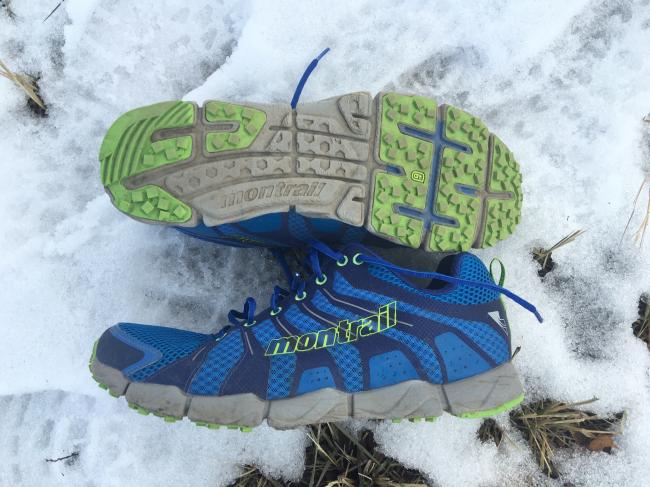 Great midsole and ride on these – vastly improved over the Fluid Flex II. Upper is a solid design, but high volume.

The Fluid Flex ST was a big surprise for me and has one of the best dry trail rides of all the shoes I tried last year. It was a surprise because I really wasn’t fond of the original Fluid Flex, which was too soft and unstable on technical terrain. With the Fluid Flex ST, Montrail added their Fluid Guide feature to the midsole where they put denser foam in the midfoot in a graduated way so it blends more than a traditional post. Additionally, the fluid guide is on both sides of the midfoot, and even extends to parts of the heel and forefoot so it is not like a medial post but more for overall stability and structure.

Montrail also added a very minimal rock plate to the forefoot and simplified the upper. The result is a shoe that runs very precise for how forgiving it is, and feels a lot lighter than its weight would suggest. The only issue I have with this shoe is that the upper has way too much volume in the midfoot, and the heel collar was too high for my foot, so it feels a little too loose overall. I’ll probably do a little modifying to the lacing to try to snug it up a bit, but mostly I’m hoping the recently-released Fluid Flex FKT, which has the same midsole/outsole setup, will address the issues I had with the upper. All in all, the Fluid Flex ST is a fantastic trail shoe and one at a fairly rare $95 price tag. 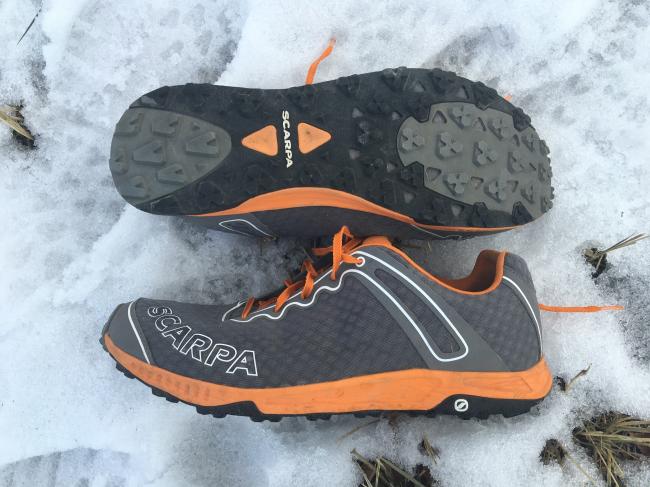 The Scarpa TRU is my first experience with Scarpa trail shoes other than trying on the Spark a while back. The TRU has a great minimalist design, and the fit is very nice with a medium/wide forefoot and snug midfoot/heel. The outsole is also designed well with low profile lugs, and reminds me a lot of the New Balance MT101. It has a nylon fabric rock plate in the forefoot and a very firm midsole so that it comes across as fairly protective from rocks, but also not very cushioned. If you liked the ride of the MT101 or MT110v1 this is right in the same vein and quite minimalist feeling, but with a better fit than either of those. The outsole is also a very hard rubber compound which should hold up very well over time, although it also contributes to the super firm ride. The TRU mostly has me really excited about the potential of the forthcoming Scarpa Atom and Neutron which have Vibram rubber and are 4mm and 6mm drop. 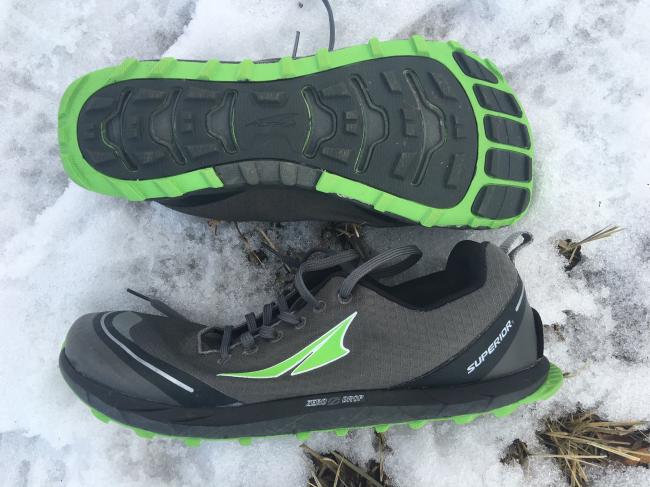 Altra’s most nimble trail model. Best Altra ride to date for me, and interesting mix of design.

The Altra Superior 2.0 is by far my favorite Altra that I’ve tried. It has a nice, responsive ride with what feels like a blown rubber outsole that adds to the springiness. The upper fabric is more effective at holding the foot than most other Altras since it has very little stretch to it (unlike the Lone Peak 2.5). This is a good thing since it seems that Altra avoids putting overlays on their trail shoes (the Lone Peak 3.0, thankfully, appears to change that trend). The fit is also much lower volume than most other Altras, and fits my foot much better volume-wise. This let me really appreciate the wide toebox rather than feeling like it comes at the cost of midfoot security like some other Altras. The shoe even runs well on the road, and I’ve really enjoyed it overall. I prefer it over the Lone Peak, and oddly enough I actually feel they offer similar protection levels (not as odd when mine weight only 15 g or .5 oz different).

All that said, there are still some things I hope they change in the future that could improve upon what is a decent shoe. First, I don’t like the outsole cutouts at all. It exposes too much midsole to rocks, which puts the foot at more risk and damages the foam prematurely. The added flexibility (what little it adds) is not worth the trade off in my opinion. Second, I also don’t care for the removable-rock-plate-under-the-footbed concept. It adds a lot of weight, messes with the volume of the fit if you want to take it out, and would be more effective between the outsole and midsole rather than under the footbed. I know Altra likes to sandwich the rock plate up higher in the shoe like in the Lone Peak so it deflects the rock into the midsole before it hits the plate, but I don’t think the design makes sense. I don’t find my foot pivoting in shoes with regular rock plate placement like they claim (especially on lower stack shoes), and you lose a lot of precision in the ride and the protection the rock plate gives to the foam so it doesn’t get beat up as quickly. Lastly, the heel collar is too wide and padded for what is necessary for this type of shoe. This is typical of most Altras at this point so not specific to the Superior, but I just don’t think the shoe needs it and could be lighter and snugger fitting with a slimmer heel collar.

Also of note with the Superior 2.0 is that I had to go with a size 14, which is probably 0.5 size too big for me in the end because of a sizing issue with the first round of the 2.0. The new colors launching this spring will have the sizing issue fixed, which should result in a lighter shoe that fits the same (since I could run a 13 instead of 14). Overall, I really like the feel of the shoe and hope to see an update soon since there is much potential already there. I like the wide toebox concept, and I appreciate how Altra listens to feedback and improves their shoes like they seem to be doing season after season.

The Altra Superior 2.0 is available for purchase at Running Warehouse. 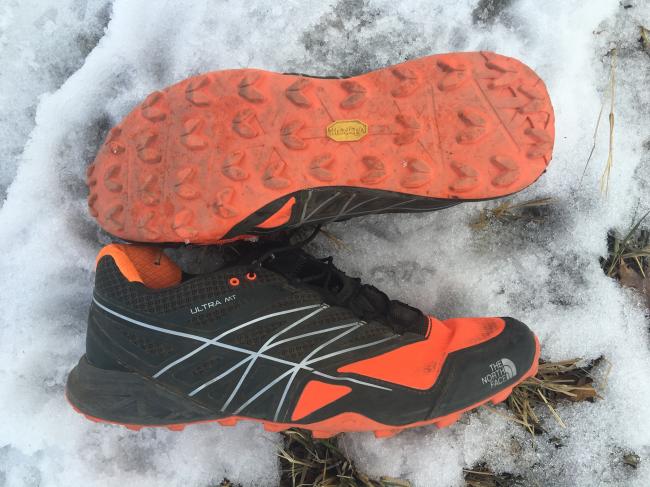 Fantastic Vibram Megagrip outsole on the MT, and rock plate in the forefoot are highlights.

The North Face hasn’t been in the shoe game for that long, but are starting to build some momentum with recent and forthcoming offerings. The Ultra MT is by far their best to date (among those that I’ve tried), and has a unique mix of quality materials and design that set it apart in the current market.

First, you’ve probably heard of Vibram’s new Megagrip rubber, which is very sticky, but also durable at the same time. So far, I have no reason to doubt those claims and the rubber has been fantastic on this shoe (so far it is the only shoe with Megagrip that I’ve run in). The last is decent on the MT – fairly roomy in the forefoot, while providing a nice lockdown in the midfoot. The heel is probably overly padded, but I didn’t feel it ruined the shoe. The midsole is firm but offers a nice pop. It runs smooth on hardpack trail, while the outsole and rockplate offer great coverage on technical terrain. The ride is precise and close to the ground, but still quite protective (rock plates win again!).

Overall, a great design, and there will be a forthcoming winter version (see pic 8 in Brian’s great preview post) next summer that adds an integrated gaiter much like the discontinued New Balance MT110 winter, but with the much better suited MT platform has me pretty excited to use them next winter (yes over a year away :)). Overall, no major issues with the shoe other than a minor gripe with the tongue being a tad short for some reason. It will be a shoe I have in my rotation for the foreseeable future.

The North Face Ultra MT is available for purchase at Running Warehouse. 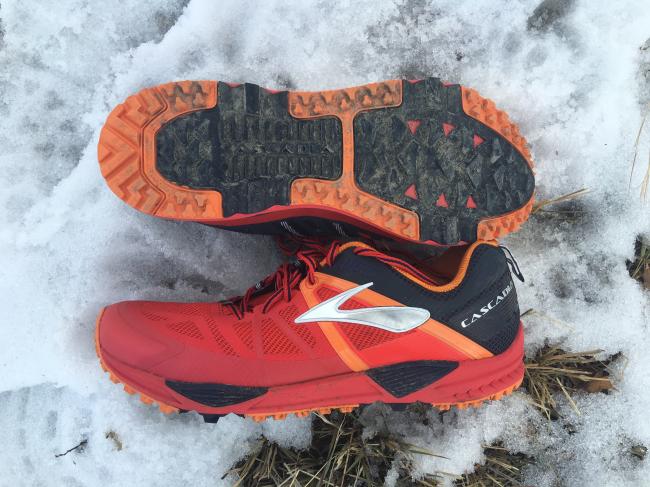 The classic Cascadia in its 10th version; my first time trying it.

Although I’ve seen many trail runners using the Brooks Cascadia over the last 5 years, I’ve never had the chance to try one, and never looked into them personally because of their heavier weight and higher drop. Brooks offered to send them, and I thought it was a shoe I should at least run in for reference because of how popular they seem to be.

The Cascadia 10 receives a more seamless upper design, and slightly different outsole lug pattern, but is on the same midsole as previous versions. Overall, my impression of the shoe was that it will be super durable, never let you feel under protected, less tank-like than I expected, but, in the end, still a pretty heavy feeling shoe. The ride is fairly firm, but with gobs of protection and some forgiveness. I can see the appeal it has for many for longer races, or if you only want to buy one shoe. The fit is better for me than the Pure Grit (which has too much midfoot volume), but still a little tapered at the big toe (like most Brooks seem to be). Overall, it is definitely a work horse trail shoe that would take a ton of abuse, handle most trail conditions, and it even ran fine on some short road sections for me.

Because we are spoiled these days with tons of options and I have shoes that are designed specifically for certain tasks, the all around nature of the Cascadia doesn’t grab me in any way. However, if you could only have one trail shoe (heaven forbid!), the Cascadia 10 would fill a lot of roles and provide a great value.

The Brooks Cascadia is available for purchase at Running Warehouse. The Cascadia 11 is now available as well at the previous link (Pete apologizes for the delay in getting this review published!)