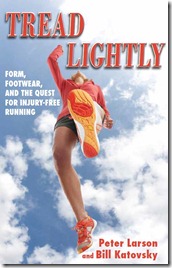 My book, Tread Lightly, has been out for a few weeks now and much of my time lately has been occupied with trying to do as much promotion work as possible. Bill and I decided to go with a small publishing house so that we would have as much control over content as possible – the benefit is that we got to write the book we wanted, the drawback is that we need to rely mostly on word of mouth and self-promotion to get the word out (i.e., we have no advertising budget).

My greatest amount of effort so far has been put into creating a website/blog to go along with the book. It contains resources and info for each chapter (which I hope to add to regularly), as well as links to abstracts and/or PDF’s of all of the scientific articles cited in the book. I plan to use the blog over there as a place to post additional content related to each chapter. You can check out the Tread Lightly website here.

I’ve done a few podcast interviews over the past couple of weeks that involve discussions of Tread Lightly, here are three that might be of interest:

I’ve got a few more podcasts in the works, so stay tuned on that front.

Fortunately, the book has been doing well so far, and initial reviews have been very positive. Reviews are incredibly helpful to us in getting the word out, so if you read the book, find it enjoyable, and want to help spread the word, a review on your personal blog or on Amazon would be hugely appreciated!

Here are a few examples of what people of diverse backgrounds are saying:

“…Tread Lightly will definitely go on my most important bookshelf, along with treasures like Lore of Running; Daniels’ Running Formula; Bernd Heinrich’s Why We Run; and Paul Milvy’s The Marathon, an astonishing collection of presentations from 1976.

Larson and Katovsky’s “Conclusion” chapter alone is worth the price of admission. Here they list their 13 key points. I’ll mention just my three favorites: 1) Runners will always get hurt; 2) There is not a single perfect shoe for all runners; and 3) There is no such thing as “perfect” running form. There may, however, be a best form for each runner and situation. That’s why you buy the book: To see if you can suss out your own best form.”

“The topics they discuss are the exact same topics I’ve been discussing with running store employees and podiatrists… and we’re closing in on some degree of agreement on some fundamental elements of running form. This book very well could be the book that triggers the tipping point I talk about frequently. It’s the single most sensible treatise on running form I’ve ever read.

From Blaise Dubois, physiotherapist at Laval University in Quebec, Canada, consultant for the Canadian National Track and Field Team, and head of The Running Clinic website.

“Without being a health professional, his (Pete’s) passion for running brought him to write with impressive accuracy. His intelligence, his thinking ability and his scientific rigor make him one of the best critics I know about the prevention of running injuries. Therefore, I strongly recommend his book called “Tread Lightly: Form, Footwear, and the Quest for Injury-Free Running”, which I consider as the best book of the year! For beginners or experts, this book is a must-read. Loaded with knowledge, but being readable at the same time, it is definitely the one to buy in 2012!”

“Anyone involved in treating runners should have a copy. It reviews exactly what has been going on in the running shoe industry and the trend toward barefoot and minimalist running. It does not suffer from the usual rhetoric and propaganda that other books in this genre do. Its use of science and its interpretation puts the others to absolute shame. There is no hype. There is no rhetoric or promises. There is no second coming of the messiah! It is actually a really good book and well worth owning a copy.”

From Dr. Casey Kerrigan, former Chair of the Department of Physical Medicine and Rehabilitation at the University of Virginia, author of 90+ scientific articles on human locomotion and gait, and current owner of OESH Footwear (full review link):

“Among things like running form and nutrition, the book debunks, in a nice systematic way, a number of long-held myths about traditional running shoe design. Pete…explains a number of findings from my studies on gait and footwear. He also highlights the continued work of my friend and former employee, Jay Dicharry, P.T., who, since I left, now runs the gait laboratory at the University of Virginia, which includes Jay’s now famous Speed Clinic.

The book reviews a number of scientific studies that elucidate the major flaws in traditional athletic shoe design; specifically foam cushioning and technologies that attempt to “control pronation.” In fact, there is an entire chapter, aptly titled “A pronation nation,” explaining how the long-held tradition of attempting to block pronation with arch supports and medial supports in shoes is not only ineffective, but in fact may be detrimental. For example, a study I did (with Jay Dicharry and others) in 2007 showed that even a tiny off-the-shelf arch cushion increases knee joint torque associated with knee osteoarthritis. The chapter supports what I’ve always said: we ALL pronate and for good reason – to protect our joints upward from the foot.”