Ultras, Sherpa John, and the Run Across New Hampshire 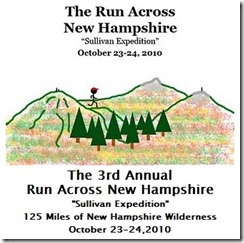 My two big running goals heading into is year were to qualify for the Boston Marathon and to run an ultramarathon. I managed to check off the former last Sunday (race report can be found here), and the latter should be met next March at the HAT Run 50k in Susquehanna, Maryland.

Given this, I thought it only appropriate to start the ball rolling on the Ultra front by featuring a local ultra runner who has put his long distance skills to good use by running across the state of New Hampshire each Fall for the past few years in support of some very good causes. Sherpa John Lacroix is a veteran of numerous ultras, and has now completed his annual Run Across New Hampshire (RANH) twice, with his third attempt schedule to occur on October 23-24, 2010. I had the honor to run about 10 miles of the RANH with John last year, and if my schedule permits, I may try to get out there again this year. He’s running the RANH this year in order to promote getting people active outdoors, and in keeping with the theme, this year he aims to run the entire way from to on trails. I sent John a series of questions about ultra running and the RANH – here’s what he had to say:

ME: How did you get into the sport of Ultrarunning? 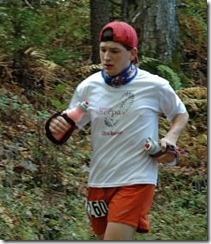 SHERPA: In 2004 I was making a documentary film about hiking New Hampshire’s 4000 Footers. As I was nearing the completion of the list and film, I was in need of a new hobby, and wondered if anyone had ever hiked the mountains the fastest. What I found was a “mountain” of information and stories about folks as early as the 1970s who had indeed hiked the mountains the fastest. I went and met Tim Seaver who is the current record holder at 3 Days 15 Hour 51 Minutes (187 Miles), and he told me about this thing called Ultra-Running. I asked what someone needed to do to become an ultra runner and his response was, “Basically you have to be stubborn and able to put up with a little, well actually a lot, of discomfort.” I was hooked on the idea and started running. I couldn’t run a mile without walking back in 2004 when is started, so I’ve come a long way since then. (You can read more about how Sherpa got into ultras here: http://sherpajohn.blogspot.com/2007/10/ultra-running-how-i-got-into-it.html)

ME: Do you ever run shorter distances?

SHERPA: Yes I do, all the time. I tend to run shorter distances during the week which are anywhere from 5K to 10 miles or so. These shorter distance training runs are what I use to keep loose, go through the motions and refine a lot of my posture, speed and hill techniques. In terms of racing shorter distances… no. I can’t see paying $20+ to run a local 5K when I could pay $50 to run a 50 Miler in most cases. I like to look at signing up for races as a pay for value type system. I could pay $80 to run 26.2 or pay $175 to run a 100 Miler in some amazing place. I’ll take the 100 any day.

ME: Aside from the Run Across New Hampshire, what is your most memorable running moment?

SHERPA: Man… there are so many to choose from. I’ve been extremely lucky to have the various adventures I’ve had over the last 5 or so years. I’ve been from coast to coast, north to south.. it’s been great. But if I had to choose one I’d say it would be my finish at the 2009 Massanutten Mountain Trails 100. I had run the race the year before and finished a battered and broken man… but I was better for it. I always try to find ways to make things tougher, so the following year (2009) I signed up for the race in their new “Stonewall Jackson Division” where you are required to run from start to finish without a pacer or crew. You’re on your own for 102 miles through some of the rockiest terrain east of the Mississippi. It was one of the toughest and most painful things I’ve ever done. I think I crawled at under a mile per hour for the last 13 miles of that race just to finish. I had horrendous chafe, trench foot, you name it. But I did it.. and I’ll never forget the effort it took and how I felt after.

ME: I’ll be running my first Ultra next March (HAT Run 50K) – what advice can you give to a first time ultrarunner?

SHERPA: Ditch the watch. When training, it’s more about time on your feet, the speed will come the more you do it. It’s all about the journey in getting from A to B and looking good when you get to B. The watch is more of a nuisance and brain buster then anything else.. so ditch it. Left, Right, Repeat.

ME: What is the Run Across New Hampshire?

SHERPA: The Run Across New Hampshire is an annual run that I started as a way to try to get folks in the local area outside. Over the years I really feel like we’ve failed on this front so this year we’re really taking a hard stab at it. We’ve teamed up with Conservation New Hampshire and it’s our goal to get as many people outside as possible. This year’s run is being held on October 23-24, 2010 and is a trail run taking place on the Sunapee-Kearsarge-Ragged Greenway and the Monadnock-Sunapee Greenway. The run totals 128.8 Miles with over 54,000 feet of elevation change – basically I’m going to climb Everest, around the clock, day and night, for two days. It all ends on Mount Monadnock, the worlds second most climbed mountain, and we really hope folks will join us for the final climb.

ME: How many years have you been doing the RANH?

SHERPA: This is the third year of the run. We started in 2008 by running across the state at it’s widest point which started in the West on the Route 9 bridge connecting Brattleboro, VT and Chesterfield, NH; and then continued East along routes 9, 4 and 1A to Odiorne State Park in Rye, NH which is the Eastern-most point. In 2008 we ran 125 miles from point to point to make it an even 100K, we did it to raise money for Make-A-Wish Foundation of NH. We repeated the run in 2009 with a shorter version of 120 miles and we did it for funding for The Seacoast Science Center. This year’s run is more of a North to South lollipop and explores a section of our state that remains pretty rural and unused.

ME: Why the switch from roads to trails?

SHERPA: While planning the 2008 Edition of the run, my running buddy Nate Sanel and I had a long talk about how much the roads were going to hurt and thought about ways to run the width of the state on trail. We thought about how much more time that would take and wondered if it was even possible. After much debate, we stuck to the busier roads of Routes 9 and 4 for fundraising purposes. But the last two years, one of our aid stops out in Nelson, NH is the parking lot for a Monadnock-Sunapee Greenway trailhead. We’ve always kind of looked at the trail while sitting there resting, and wished we had done a trail adventure instead. Trails are a lot less punishing on your body and a lot more fun… no doubt about it. So the switch was an easy decision, besides, I’ve seen enough of Routes 9 and 4 to last a lifetime.

ME: What’s the hardest part about completing an event like this?

SHERPA: I’d say the mentality of it all. I’m a firm believer that the human body is a most resilient and amazing thing. We all can accomplish so many things that we think are impossible and far from reach. Truth is, your body is designed in such a way that physical accomplishments are actually closer to reality than most people realize. That’s the hard part right there, believing that you can do it and then actually keeping that thought in your mind from beginning to end. There is no doubt in my mind that there’s going to be a few points while out on the adventure where I doubt my ability to complete the task. To keep moving forward when I’m losing hope, and getting out of that funk and back to believing in myself, that’s a tough task that’s going to happen quite a bit. But hey… I want people to get outside and I’ll do whatever I can to convince folks that they too can do anything they put their mind to.

ME: What’s the best part about completing an event like this?

SHERPA: There are really so many facets to an event like this but I’d have to say the people. I have a great crew that comes out to support me. Seeing them have such a great time, outside, as dedicated to the run as I am is really something else. In the end, everyone feels the same sense of accomplishment. It’s a team effort. If we get some new faces to come out and join in that with us, it’ll be perfect. But that’s definitely the best part, the people.

ME: How should people go about getting in touch with you if they’d like to join you for part of the RANH (do you have a website with details?).

SHERPA: If you want to get involved There’s actually two ways you can you do so. We want to encourage folks to get outside and enjoy a section of our state that isn’t typically used or known about for recreational purposes. You can sign up to run or crew by contacting Leah Belanger. She’ll provide you with all the details. Runners: In the coming weeks, we’ll post a list of segments you are welcome to run as well as their level of difficulty based on the perception of a mid to back of the pack runner. Crew: Crewing is a hard job. It requires patience in that you do very little driving and a LOT of waiting around for the runner(s) to appear. Once they’re there, you spring into action for all of 5 minutes, rinse and repeat. For more info visit: http://sherpajohn.blogspot.com/2010/09/2010-run-across-new-hampshire.html