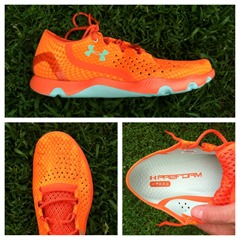 I was at a store called Reny’s in Bridgton, Maine last week when an older woman, probably in her 80’s, walked up to me with a big smile on her face and her finger aimed at my shoes. “You’re making a statement in those!” she said, chuckling as she proceeded on past me down the aisle. I was wearing a pair of fluorescent orange Under Armour SpeedForm shoes, and I have to agree with the old woman’s comment – these shoes are hard to miss!

Before they sent me the SpeedForm, I had never run in a pair of Under Armour running shoes. When it comes to running footwear, I’d always thought of them as a maker of fashion-athletic shoes catering to teenagers and college kids. They recently sent me a pair of their Toxic 6 shoe and it didn’t do much to convince me that they were serious about making a good running shoe – it’s a rather gaudy shoe and the upper dug into my arch area with each walking step – I haven’t risked running in them yet (there’s only so much foot damage I’m willing to risk in the name of writing reviews).

Much like Skechers has recently done with their Go Run line of running shoes, Under Armour now seems like they are making a move toward producing legitimate performance running shoes. With the SpeedForm they have a very impressive entry into this niche.

The Speedform has an interesting marketing story behind it since the upper was designed in a bra factory (UA is well known for their performance athletic apparel after all!). It’s a really unique upper in that there are very few seams, even in the heel (don’t know about you, but it seams to me that the word “seamless” is used way too often for shoe uppers that are far from seamless). The seams that are present are taped over by a welded overlay (see the dark orange bands on the sides in the photos above) making them very flat and smooth. Theoretically this should make the shoe ideal for sockless running (more on this in a minute, but it didn’t pan out that way for me).

Below is a video that gives a good sense of the unique upper:

The upper is indeed comfortable, and the first time I put them on I was really impressed by the fit and feel. As a casual shoe I could wear them sockless with no issues.

The upper is made of a semi-stretchy, almost neoprene like material, but it doesn’t smother like a neoprene boot would. Under Armour added holes all over the upper to allow ample air flow, and the forefoot is structured in such a way that it doesn’t hug the skin closely like the adidas adipure Gazelle or Nike Free 3.0 v5. This further enhances the ability of air to flow through the shoe. The downside of the upper material is that it tends to absorb water and sweat and does not dry particularly quickly.

Internally, the upper of the Speedform is both soft yet sort of rough at the same time. It’s hard to describe, but the material is soft to the touch, but the way it is woven creates a puckered feel – you can kind of make out what I mean in the photo below. This is probably the only major complaint I have about the shoe – when running sockless I got some friction under my foot and am concerned that hot spots could turn into blisters over longer distance. I’d recommend that they smooth out the lining, at least on the footbed, in future iterations. This was not an issue when wearing socks. 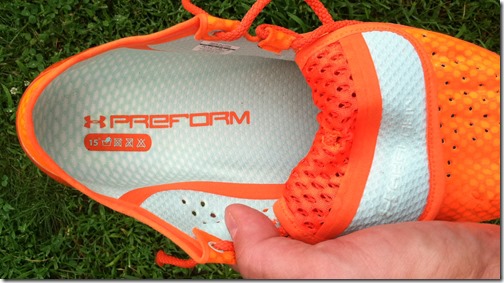 In terms of fit, the Speedform is excellent. The heel hugs the foot perfectly, the midfoot is snug, and the forefoot is roomy. It’s not Altra or Merrell Barefoot roomy, but I have no complaints about space. The shoe disappears on my feet (caveat – when I wear socks).

So why the emphasis on socks? Well, for me they didn’t work out as a sockless running shoe. I often have trouble with hotspots along the arch and ball of my right foot as I tend to pronate more on that side. On my first run in the Speedforms (an 8 miler) I developed a blister at the front of the arch near where the taped seam is located. I’m 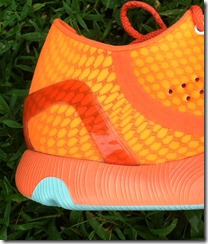 still not entirely sure why it happened, and I did not have an issue on the left side. My guess is it had to do with the fact that my right foot rolls in more (UA also sent me a second pair a half size larger, I may try those out and see if they help).

My other problem spot was on the heel of my right foot. There is a flexible, rubber-like welded cradle around the heel of this shoe, and this cradle seemed to rub my foot on the inner part of the heel (right near the apex of the clear orange band in the photo to the left). Wound up with a blister there as well. Again no problems on the left side. When wearing socks I have had no issue in either spot. I’d be curious to hear other people’s experience running sockless in this shoe – leave a comment!

Though the upper gets all of the attention in the early marketing, for me the sole is what really makes this shoe great. I measure stack height around 21mm-15mm, so about 6mm drop. There’s no real flare to the heel, and it does not get in the way when I run. There is a very slight build-up of the sole medially and laterally around the midfoot – I wouldn’t really call it arch support, more of a mechanism to hold the midfoot in place.

What I love about the Speedform sole is that it’s responsive but not overly firm. When I first put them on I thought they felt soft while walking around, but after running about 30 miles in them they run a lot like a traditional racing flat. They feel like a very slightly softer and less stiff version of the Skechers GoRun Speed (Meb’s racing shoe). In fact, I almost wore them in a 4-mile race last week, but opted for the Nike Lunaracer 3 instead since my legs were feeling shot from running hills in Maine and the Lunracer is a much softer shoe (wound up winning my age-group!). The Speedform would be a great shoe for racing 5K’s-Half Marathons (it weighs just over 6 oz in size 10, so comparable to many flats), and I could even see myself using them for a marathon (but have not done long distance runs in them yet to assess).

As I always like to point out, writing a lot of reviews means not so many miles on individual shoes, and this makes it hard to comment on durability. But, I can say that after 30 miles I see no abnormal wear on the sole. Rubber is used only sparingly at the heel, in small pods across the forefoot, and under the big toe. If you tend to eat away the lateral forefoot of shoes you may have durability issues with this one.

I’m really impressed with the UA Speedforms. They look great, make a statement, and perform really well out on the road. Are there things I would change? Yes, probably make the interior lining a bit smoother under the foot, maybe use a less absorbent upper material, bring the price down a bit ($120 MSRP). But, in the Speedform Under Armour has a shoe that will satisfy the needs of a more performance-oriented runner, and it could form the foundation of a performance collection if they decide to continue to develop in that direction.

What’s more, given Under Armour’s brand popularity (UA has a much bigger cool-factor than Skechers for example), the Speedform may pick up quite a few fashion sales as well. I could see these being popular among a high-school and college-age crowd for example. Might Under Armour have something here that could compete with the Nike Free juggernaut? Time will tell, and I like them enough that they will retain a spot in my rotation!

The Under Armour Speedform can be purchased at UnderArmour.com and at Amazon.com in a variety of striking colors: