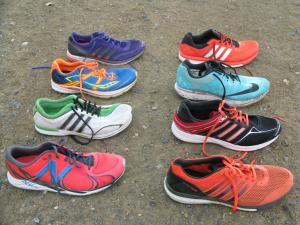 I’ve been using road racing shoes for trail running for quite some time now. Within this category, I typically look for shoes that feel fast and quick, are lightweight, and yet can still protect against the hazards of the trail.

Recently, I spent some time trying to narrow down the shoe(s) I intended to use for the 2015 Western States 100 Mile Endurance Run, and I thought a road shoe might be the best option, especially in the latter half of the race. Based on this process, I thought a post on using road shoes for trail running might be helpful. Before I share some of the shoes I’ve had good luck with on trails, I’d like to highlight a few things that I look for in a road shoe that, for me, make it more trail worthy:

1. Stack height – Road shoes don’t ever come with rock plates, and usually don’t have thick outsoles. So, to protect against rocks and provide some cushion on longer trail outings, I like to look for road shoes with a decent stack height (usually, unless the midsole is really dense, this means 15 mm forefoot height up to maybe 18 or 19 mm).  This ends up leading me towards marathon or performance training type road shoes as most 5k-1/2 marathon shoes are pretty stripped back, thinner, and lack outsoles of much substance. Shoes like this won’t last very long on the trail (I’ve blown though a few to find this out the hard way :)).

2. Outsole rubber quantity and placement – For road shoes to hold up on trails they need to have some outsole rubber to provide durability and traction.  I actually don’t feel like there needs to be much lug per se, but rubber coverage, especially over the metatarsals and lateral forefoot, is a must. This is mainly to provide protection for your foot, and also to protect the midsole foam so it doesn’t get crushed by rocks; an outsole helps to disperse impact. The traction issue is honestly pretty secondary for me. Rather, one thing I like about road shoes on dry, hard-packed downhills is that they "float" on contact. This just means that they slide a bit when the foot lands, rather than catching and braking like a more heavily lugged trail shoe, and this helps reduce quad fatigue on longer downhills.

3. Midfoot shank – I  really prefer road shoes with a midfoot shank to give the shoe more structure and rigidity over the long haul.  Most of adidas’ road shoes feature what they call their "torsion system" which provides this function, but many other road shoes, especially marathon racing shoes, have a shank in the midfoot.

So on to some of the road shoes I’ve been enjoying on the trails lately starting from the lightest to heaviest: 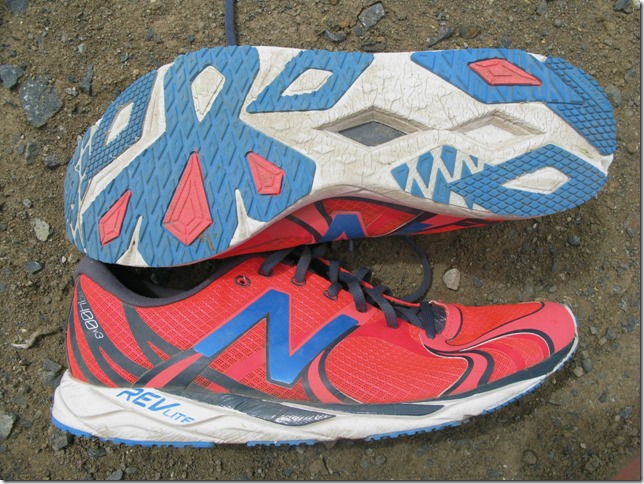 The New Balance 1400v3 is a great example of a company taking a shoe that works and slowly refining things until they end up with a fantastic all-around package. While the 3rd version of the 1400 is not substantially different than v2, the changes made in the upper really elevate the shoe overall in my mind.

With the same midsole and outsole setup as v2, which to me added protection and responsiveness over v1, as well as having better outsole coverage over the metatarsals, v3 adds a soft and light upper that is neither as thick and hot as v1, nor as stiff and scratchy as v2. This all adds up to a super-light shoe that is very comfortable and secure on the foot that I’d be willing to use for races up to 50k on trails.  No other sub-7 oz shoes I could say that about. 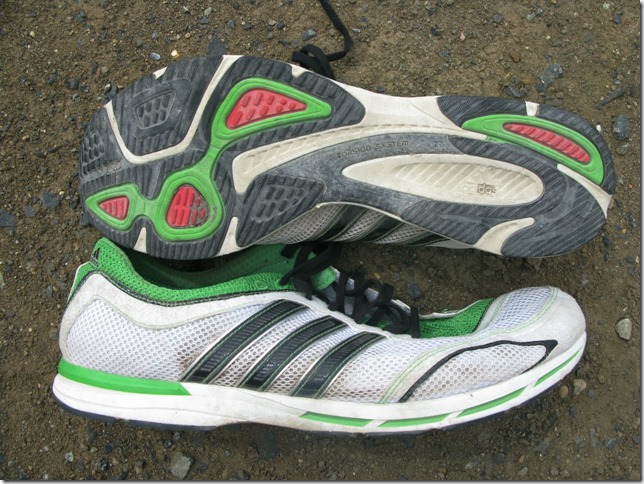 Ok, I know the Rocket has been discontinued for a while (since 2012 I believe), but I recently found a pair on eBay (in size 13 no less!) and was reminded of how ridiculously good they are for trails. With a full length adiprene+ midsole and nearly full coverage outsole, the Rocket can handle nearly everything you can throw at it other than mud. The fit is very precise yet comfortable, and they are as durable as a 7 oz shoe can be.  If you find a pair snag them; you won’t regret it!  If anyone from adidas is reading this, bring back the Rocket! 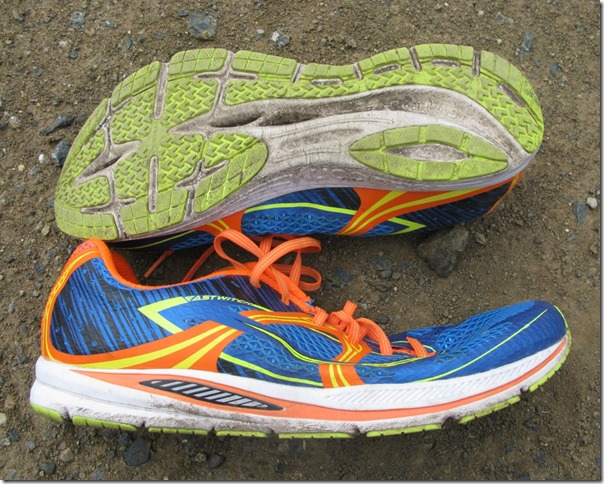 The Fastwitch 7 was the first "stability" racing shoe that I gave a shot (have since run the New Balance 1500 and adidas adizero Mana 6 – see below) – I’m glad I did! I figured that at 4mm drop, and 7.2 oz in weight, the pronation control couldn’t be all that intrusive, and the rest of the shoe looked right up my alley.  Given the Fastwitch 7’s relatively firm midsole, I think it is actually better suited for dry trails than it is for road. The upper is comfortable, and the ride is light and efficient, yet still protective. Only issue I’ve had is that they aren’t great if there are puddles or mud on the trails – with the large drainage holes in the bottom and the mesh strobel, the water comes right on through :). 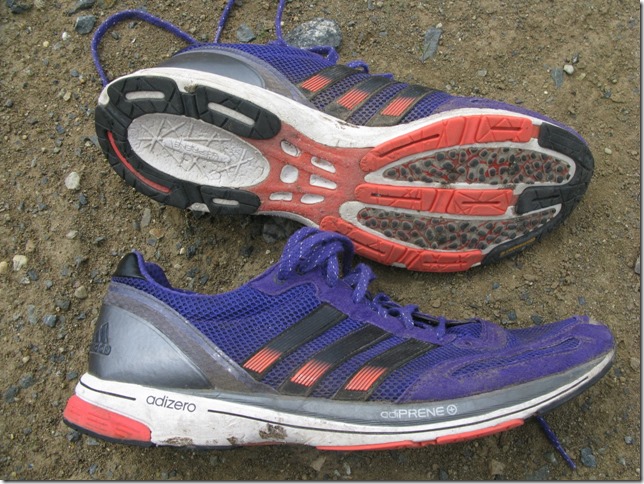 Another discontinued shoe, but much easier to find than the Rocket. While I definitely prefer the adios 1 and 2 Boost on the roads (and I do like the adios 2 Boost on smoother trails), the adiprene sole of the adios 2 can handle a much broader range of trails. It’s a pretty firm and stiff shoe which helps make it protective and supportive for longer efforts, especially with its fairly robust torsion system that goes nearly from heel to toe.  It provides a great, fast and efficient ride, and is enough shoe to handle legitimately long runs (e.g., Hal Koerner won the Hardrock 100 in 2012 in the adios 2). It also has a light, yet fairly comfortable upper that drains and dries out quickly (personally tested this on a 20 miler with multiple creek crossings). 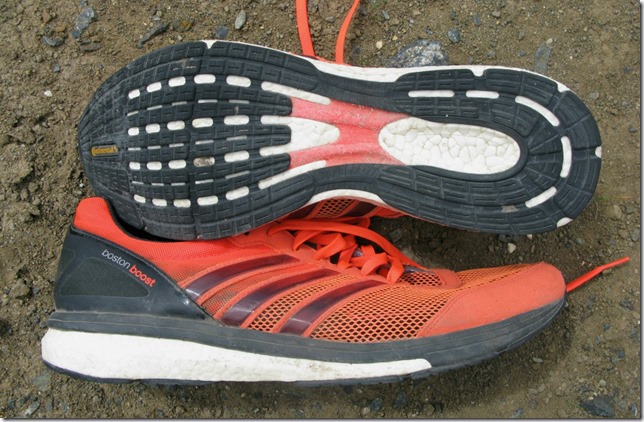 The Boston 5 is a shoe that I really didn’t expect to like as much as I now do. My first run with it was a 10 miler on the roads and I just wasn’t digging the fit, and after getting used to the adios boost it just feels slow in comparison. The saving grace was after I took it out on some trail and the shoe really turned around for me.

With its more flexible forefoot, outstanding outsole for trails, and more cushioned yet still responsive and light weight ride, it just shines for me on trails (even on technical trail).  My only issue with the shoe at this point is that the upper is not the most comfortable, but has worked well even on a recent 5 hour, 30 mile training run w/7200 ft of climbing. I also chose the Boston 5 as one of my Western States shoes, but had to change out of them at mile 47 due to some tendon discomfort on the top of my foot. The women’s Boston 6 is getting a fantastic looking upper update here yet, inexplicably, the men’s version is not?!?  That seamless upper would solve nearly every issue I’ve had with the shoe. 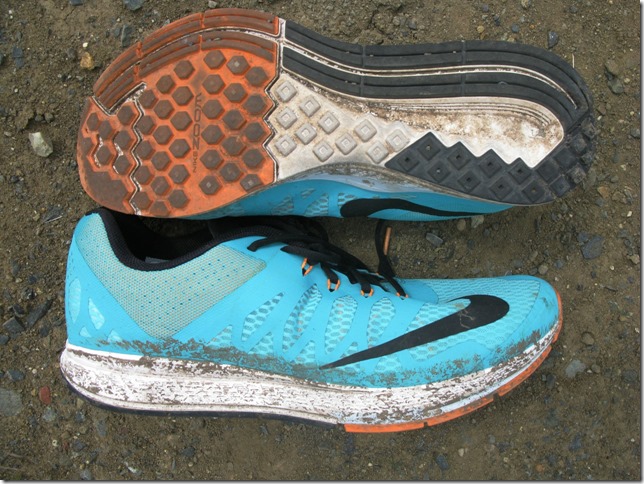 I’m not sure whether Nike read my review of the Elite 7, but it sure appears that way.  That or, more than likely, I wasn’t the only one who had issues with the lack of medial heel rubber on it, because Nike quietly released a new colorway (linked via Running Warehouse link above) this Spring that rectifies the problem. What this means is that the Elite 7 is back in my rotation, and I really enjoy it for longer, smooth trail runs where I want a little bit softer ride than my go-to adidas usually give.  It also gives tons of protection over the metatarsals with a full patch of forefoot rubber and forefoot zoom air unit.  A great shoe, and I wore them from about mile 47 to mile 62 at Western States this year. 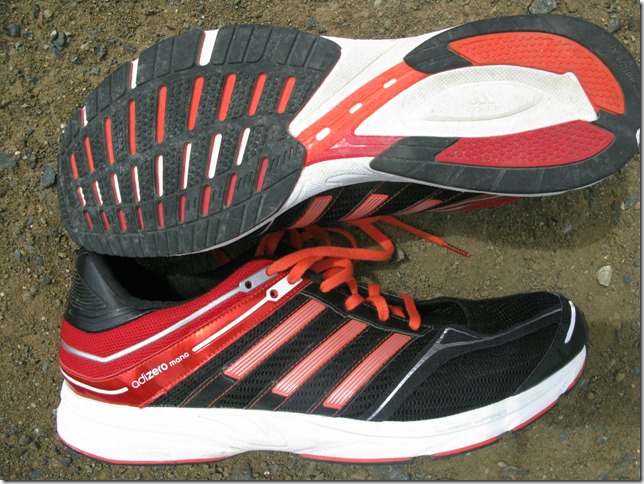 I recently ran across the Mana 6 online at Start Fitness, and after looking them over and seeing that they were quite reasonably priced (I had a 15% off code and got them for $50 US), I decided to give them a go.  I’ve since received them and put a couple runs in them – I really like them, especially for how protective and substantial they feel compared to many of the other adidas shoes I own. However, they still retain the responsive feel that I like in the adidas adizero line.

If the footbed is any indication, then the Mana is on the Boston last (there are last numbers on the bottom of most adidas footbeds), but it feels roomier than the Boston 5 and a 1/4 size longer (I think the Boston 5 runs a bit short so this is a good thing). The outsole coverage is generous and thick so this shoe will take some abuse. Additionally, I don’t believe the 9 mm reported drop; it feels drastically lower than the adios and more like a 4-6mm drop – it’s nice to be able to mix this up with the 10mm drop of most of the road shoes that I use. The Mana is good for long runs with a mix of road and trail.

Note: I also got in the Mana 7 from Start Fitness and while I haven’t run in it, it looks promising for shorter runs. It’s a much lighter shoe (~7.5 oz or so), and is on the adios last instead of the Boston last.  It’s a shame that it seems the Mana series has been dropped since they are a nice complement to the other adizero shoes. 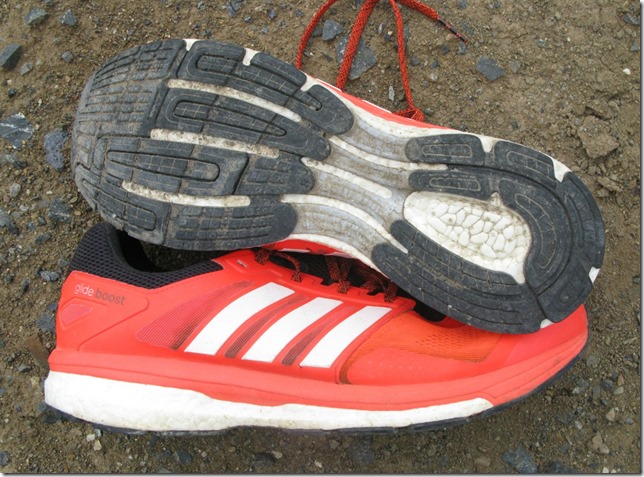 Earlier this spring I wrote an article that talked about some trail shoes that I was looking forward to in 2015. Number 5 on that list was the adidas Ultra Boost, which I thought would make a great late-ultra trail shoe. Turns out I should have put the Glide 7 in its place. After putting miles in both models, and originally feeling the Glide was too much shoe (it’s heavy, and yes I know it’s not a racing shoe :)), I’ve since come to really love its balanced, responsive (especially for the weight and protection it gives), and no nonsense ride that handles technical terrain much better than any other shoe with the same level of protection and cushion (I still haven’t come around to Hokas in that regard). I’d attribute this to the relatively low stack height for a shoe of its substance, but also to the inclusion of a healthy amount of Boost foam and thick Continental rubber; I’m a big fan of both.

I used the Glide 7 late in the race at the Peterson Ridge Rumble 40 miler outside of Bend, Oregon in April, and also for about 15 miles at Western States. I was really happy with them in both races, and I regularly use them for easy/recovery runs. They’ll eat up the miles (I’d expect them to last 1000 miles no problem), run well on trails or road, and provide a lot of the foot protection and relief that a Hoka does in a much more focused and familiar ride for someone like myself who usually prefers lighter and more responsive shoes.

I know there are many other road shoes out there that you all enjoy on trails (for example., I like the New Balance Zante on flatter trails), and many coming out that I’m interested in trying on trails (Mizuno Sayonara 3, Hoka Clifton 2, New Balance Vazee Pace to just name a few) so how about adding in any recommendations in the comments below?