Last week I wrote a recap of the course I recently attended on the prevention and treatment of running injuries. In that post I mentioned that the topic of impact loading rate has gained a lot of interest lately in terms of it’s potential relationship to injury risk in runners. In the comments that followed that post, Amby Burfoot suggested that I write a summary of what exactly vertical loading rate is, and why it is important to a runner. This post is my attempt to give a shot at an explanation, but also to point you to a series of posts by an expert on the topic – physcial therapist Jay Dicharry from the University of Virginia SPEED Lab.

Vertical Loading Rate – What is It and Why is it Important?

As we run, each foot comes into contact with the ground some 80-100 times per minute on average. This translates to a stride rate/cadence of 160-200 steps/minute, and I choose to keep the range broad here since cadence varies from person to person and to some degree with running speed. Every time you land, your foot impacts the ground with a certain amount of force, which is counteracted by an equal and opposite amount of force applied by the ground on your foot. This equal and opposite force is known as the ground reaction force or GRF for short. The ground reaction force comes in a number of components, typically broken into anterior-posterior (along the direction you are traveling), horizontal (side-to-side), and vertical (straight up and down). Of these, the vertical GRF is the greatest in magnitude, and is the one I will focus on here.

Below is a graph depicting the vertical ground reaction force curve for a heel-toe runner (modeled after Cavanagh and LaFortune, 1980): 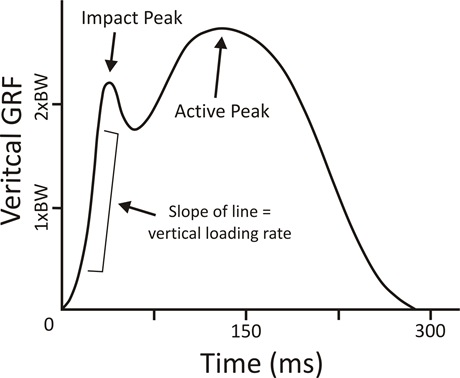 On the vertical (Y) axis is the value of the vertical ground reaction force as a function of body weight. You can think of this as a proxy for how much force the foot is applying to the ground as you run. The horizontal (X) axis shows time in milliseconds – the amount of time each foot is in contact with the ground varies among people and at different running speeds, but 300 milliseconds (about 1/3 of a second) is a reasonable number for a typical runner. The curve depicted on the graph shows how vertical GRF changes from the point of initial contact of the foot with the ground (time 0) to the point where the foot leaves the ground on toe-off (about 300 ms). What you’ll notice in this graph is that there are two distinct force peaks. First, the impact peak is the initial force applied to the ground by the foot and lower leg at initial heel contact (remember, this graph is for a heel-toe runner). Full body weight is not being applied at this point, so the impact peak is basically a function of the weight of the foot and lower leg hitting the ground. The active peak represents the force applied by the foot and supported body weight during roughly mid-stance. Notice that it is larger than the impact peak – this is the typical pattern.

In the above graph, vertical loading rate is essentially the slope of the line from initial contact to to the impact peak (in practice, it is usually measured in the region from 20-80% between these points). The loading rate simply represents how quickly the impact force is applied – a steeper slope means a more rapid collision. A more gentle slope would indicate that force application during impact is being spread out over a longer period of time. A reasonable analogy would be punching the wall with your bare fist – your fist comes to a very rapid stop and the force is applied quickly. This is not a good thing for your fist. On the other hand, if we put on a boxing glove, we could still hit the wall really hard, but the cushion in the glove would slow down the impact and distribute the force over a longer period of time. Consequently, it would not hurt as much, and would likely not damage the bones in your hand. The same logic applies to crumple zones in a car – when you crash the crumple zone slows down force application to protect the driver and passengers from the sudden shock of an immediate impact.

The upshot of the above information is that if you are going to run in a heel-toe style, putting cushion under the heel will slow down impact and decrease the loading rate by spreading force impact over a longer period of time. This is a good thing for your heel bone (the calcaneus), and why barefoot runners tend to move away from a heel strike, particularly on hard surfaces. Your heel fat pad does not provide enough protection to absorb impact during barefoot heel-toe running. If you are a heel-toe runner, particularly one who overstrides with an extended knee and a pronounced heel strike, you should by all means wear a shoe that has a cushioned heel.

Now, lets take a look at what happens if we were to switch our running style to a forefoot strike: 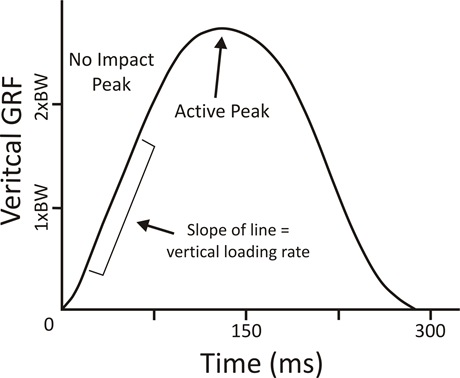 What you’ll note is that the impact peak is now gone. By eliminating the heel strike, we have eliminated the impact peak entirely. The reason for this is that instead of absorbing impact via a collision between the heel and the ground, we have switched the impact moderating behavior to absorption by the arch of the foot and the Achilles tendon/calf muscle complex. The lower limb is much more compliant in a forefoot strike, and thus the collision is not detectable. What you will also notice is that the slope of the line is now lower – loading rate has decreased (this graph is probably a bit exaggerated given my lowly Photoshop skills, but the point stands nonetheless). If you run with a forefoot strike, as most barefoot runners do, a cushioned heel is unnecessary. In a roundabout way, the cushioned heel is essentially a solution to a problem created by shoes with a cushioned heel. The heel allows you to heel strike, and if you heel strike you need the heel for protection.

I should also point out the heel-toe running in a shoe with a cushioned heel does reduce loading rate. In Daniel Lieberman’s study (Lieberman et al., 2010), he showed that loading rate was the same in shod heel-toe runners and barefoot forefoot strikers. But the key point is that even if the cushioned heel reduces loading rate, it allows/causes you to run in a way that is biomechanically different than you would if you ran barefoot (longer stride, different joint angles, pronounced heel strike, etc.). As a result, forces are applied in a way that the body may not have evolved to handle as well (e.g., joint torques are higher in shoes – Kerrigan et al., 2009; shorter, quicker stride reduces joint impacts – Heiderscheit et al. 2011). The consequences of that are what we are trying to understand when it comes to applying this knowledge to injury risk.

Why does all of this matter? It matters because higher vertical impact loading rates, but not impact peaks, have been linked to injuries like lower extremity stress fractures (see this review paper by Zadpoor and Nikooyan, 2011). There is some debate on this topic, as Nigg, 1997 reported results of a prospective study from a graduate thesis suggesting that impact force and loading rate are not linked to injury, and that increased loading rate was actually associated with fewer injuries. However, this analysis looked at short term injuries and did not look at injuries by specific type. I am also rather hesitant when trying to interpret results from research that has not been published in a peer-reviewed journal. In contrast to Nigg’s findings, Davis et al. report results of a prospective study in a conference abstract showing that vertical impact peak and vertical loading rate are linked to a higher incidence of running injury. Again, not published in a peer reviewed journal, but also prospective and contradictory to Nigg’s report. 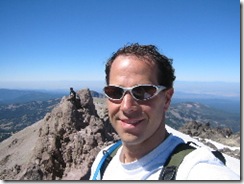 Rather than hash this debate out myself, I’m going to defer to an expert on the topic. Jay Dicharry (pictured at left) is a physical therapist and researcher at the University of Virginia Speed Clinic. He essentially spends his days in one of the most high tech gait analysis labs in the world attempting to fix broken runners. After posting my injury course recap, Jay emailed me and said that he has been working on a post about the significance of vertical loading rate, and we have coordinated to post at the same time. So with this introduction to the topic from me, I’m going to let Jay take it from here. Check out the first post in Jay’s 2-part series on loading rate here in the “An Athlete’s Body Blog” from the UVA Speed clinic: http://uvaendurosport.wordpress.com/2011/02/07/loading-rate-part-1-what-does-it-mean-for-you/

In the meantime, here is a cool series of videos from Running Times Magazine featuring Jay and his lab:

To view the third video in the series, visit this page on the Running Times Magazine website.