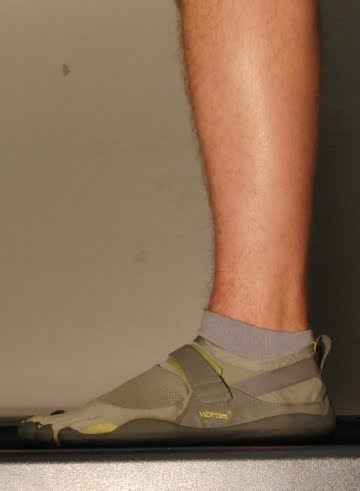 In my previous post, I posed the following question to Ian Adamson, director of product development and education for the Newton Running Company:

Me: Available data indicate that most people are heel-strikers. Is it your belief that the presence of extensive heel cushion (i.e., a heel wedge/lift) essentially forces a heel strike in most people?

Ian’s response to this question was as follows:

“More accurately the data shows people running in traditional shoes are forced to engage the ground with heel of the shoe. Remove the heel and you remove the heel strike. Professor Daniel E. Lieberman from the Department of Human Evolutionary Biology at Harvard University has been studying running gait in humans and concluded that no one heel strikes naturally. He looked at (among other groups), people who have never worn shoes. Dr. Lieberman’s study should be appear shortly in a major scientific publication.“

Needless to say, I’m looking forward to seeing Dr. Lieberman’s forthcoming paper (I’ve previously written an extensive post about some of Lieberman’s earlier work), but in the interim I thought I’d contribute a little personal insight into Ian’s answer to this question. My interest in footstrike stems from a study I am conducting with my students looking at footstrike patterns in runners recorded during the recent Manchester City Marathon in Manchester, NH.  Regardless of what we find, we will be unable to tease apart the question of whether the footstrikes we observed are the “natural” gait of each runner or patterns that are induced by the shoes that they have on their feet.  To do this would require that we film each runner in shoes, and then barefoot under identical conditions.  While this is doable in a controlled laboratory situation, it is impossible to do this in a “real-world” racing situation.

Given this difficulty, I, along with one of my students, have decided to address this question in the simplest way possible – by looking at ourselves.  Although the sample size is very small, simple studies like this are great for hypothesis development, and hopefully this will serve as a springboard for more complex studies with larger samples in the future.

A quick word about Ryan, who is the student that I’m working with.  Like me, Ryan was an early reader of the book “Born to Run” by Christopher McDougall. Also like me, “Born to Run” heavily influenced Ryan’s thinking about footwear and its relation to running. Ryan is a Junior runner on the cross-country team at our college, and since early this year he has been running almost exclusively in Vibram Fivefingers, homemade huarache sandals, or barefoot. He has accumulated approximately 1500 miles in Vibrams (and if I’m not mistaken, all of those miles have been on only a single pair), and he has been known to run barefoot in temperatures down into the 30’s.  He’s worn his Vibrams so much that the cinching strap has worn off, and in its place he used a long strip of leather. Needless to say, although I have also put in some miles in Vibrams, Ryan is a far more dedicated minimalist runner than I.  Currently, he is a captain of our track club, and is averaging running about 50 miles per week.

Filming conditions were similar to those in my previous post on treadmill running in various shoe types (in fact, videos of me below were pulled from that post).  For each of us, videos show our footstrike in stability shoes (Brooks Adrenaline for me, Asics 2130’s for Ryan), Vibram Fivefingers KSO’s, and barefoot. All were recorded while running steadily at 7mph.

Barefoot Running on Treadmill from Pete Larson on Vimeo.
Slow motion video of barefoot treadmill running – appears to be a nice midfoot strike (this was my first ever attempt at running barefoot on a treadmill). Video shot at 300 frames-per-second with a Casio Exilim EX-F1 camera. Courtesy of https://runblogger.com/.

In me, what you can see is a progression from a clear heel-strike in the stability shoes with a big heel cushion to a more midfoot strike in Vibrams and in the unshod (barefoot) condition.

And now for Ryan:

Ryan’s shift in footstrike between the Asics stability shoes and the Vibram/barefoot conditions is truly a thing to behold. He goes from being a harder heel striker than me in the Asics, to being a clear forefoot striker in the Vibram Fivefingers and when barefoot. This is all the more compelling given that he hadn’t run in the Asics for quite some time (he’s pretty much as exclusive a minimalist runner as you’ll find at this point), and simply putting them on resulted in a reversion back to the heel-striking condition. We were both pretty amazed this afternoon when we first watched the videos, and he even reported that his shins were tight after running just over a mile in the Asics. Seems his body may have re-adapted to the unshod condition (he generally doesn’t even wear regular shoes when walking around campus or going to class), and the shod condition now seemed to be putting his legs under greater stress. I’ll re-emphaisize that we are still only a sample of two, but the pattern here is clear enough to me that it warrants additional investigation.

So, for at least me and Ryan, when wearing shoes with a big, cushioned heel we are both heel-strikers, and when that heel is removed, we convert into a midfoot striker (me) and a forefoot striker (Ryan). If humans evolved to run without shoes, then the lack of a heel cushion would seem to be the more natural condition for our bodies, and it makes one wonder why the heel cushion is necessary. I still don’t believe that there are solid data that conclusively show that one type of footstrike is necessarily better than another from a performance or injury-prevention standpoint, but I firmly believe that our footwear choices heavily influence the type of footstrike that we adopt. I see it in myself, and I see it in my student. I also see it in children – my son is a midfoot striker when barefoot. Now I just need to get him on a treadmill in his mini Asics 2130’s (yes, he does have them!), and hope that they come out with Vibram Fivefingers in childrens sizes!

If you have any questions for either Ryan or I, feel free to leave a comment.