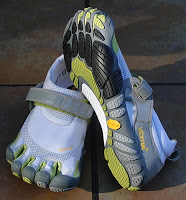 I’ve been dealing with a familiar burning sensation in my calf muscles this week (primarily the lower calf, or soleus muscle). I thought that I had outgrown this due to my regular running in minimalist shoes, but after 15 miles in the heat on Sunday, followed by 3.1 miles in my Vibram Fivefingers Bikilas on Monday, and then another 5+ in the Bikilas on Wednesday, my legs were pretty fried. The interesting thing here is that the calf soreness probably has nothing to do with the 15 miler, and everything to do with the Bikila runs. It seems the Bikila are encouraging me to land on my forefoot, thus working my calves harder than they are used to be being worked. It’s a good kind of soreness, and it indicates positive adaptation (much like the burn you feel after going to the gym and lifting for the first time in awhile).

I wrote a post a few days ago detailing some of my first impressions on the Vibram Fivefingers Bikilas, and I’d like to follow up with some additional thoughts after two additional runs. Let me start by saying that I absolutely love running in these shoes. I’ve now taken them out three times (a bit over 10 miles total), but for some reason they really do seem to encourage me to shift to a forefoot footstrike. I’m not sure why this is the case, as I rarely forefoot strike unless I’m barefoot (I have always tended to midfoot strike in my VFF KSO’s). My sense is that the snugness of the Bikila makes it feel like an extension of my bare foot, and contrary to what others have said, I feel a better connection with the ground in the Bikilas than in my KSO’s, despite the thicker soles on the Bikila. This may be because my KSO’s are a tad on the large side for me and thus less form-fitting, but it’s hard to say for sure. I did have a small issue with toe fabric pulling away a bit from the sole (my toes are fitting very snugly in the pockets), but managed to fix that with a bit of Krazy glue, and it seems to be holding well. I mentioned this to my contact who provided me with the shoes, and he suggested that anyone experiencing such an issue should contact their retailer or Vibram customer service to arrange an exchange – apparently it’s a known issue in a small subset of shoes that has since been fixed.

As I mentioned in the opening paragraph, I took the Bikilas out for 5+ miles on Wednesday, and decided to let loose for the final 0.5 just to see what I had in me. I manged to knock that half-mile out at a 6:09 pace, probably the fastest I have ever run in a pair of Vibrams. It was one of those rare moments when my body felt totally in sync, and I was firing on all cylinders. I was forefooting the entire way, it felt amazing, and it left me wanting more. I just need to hold myself back and not overstress my legs, despite my desire to get back out there in these shoes. The experiment will continue…