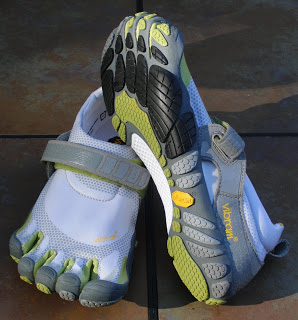 I just received a review pair of Vibram Fivefingers Bikila in the mail today courtesy of Vibram and Pursuit Brand Equity Group (thanks Adam!). If you’re not familiar with the VFF Bikila, it’s a new shoe from Vibram that is designed specifically for runners. I’ve been running in Vibram Fivefingers KSO’s for almost a year, and have written extensively about my experience here on Runblogger (if you’re interested, here’s where my string of VFF posts starts). The Fivefingers are the most minimalist shoe that I run in regularly, and I’ve been eagerly awaiting the opportunity to take a pair of Bikilas out for a spin.

I had already done a 5 miler prior to the arrival of the UPS man with the unexpected delivery this afternoon. Needless to say, when I opened up the package and saw what was inside, I knew I wouldn’t be able to wait until tomorrow to run in them – it was going to be a double-run day!

I started by just trying them out around the house. My initial thought was that they felt very snug, almost too tight when compared to my KSO’s. I had requested a size 41, which is a size smaller than my KSO’s, mainly because I feel that there is a bit too much wiggle room in my KSO toes. The big and little toes on my left foot felt like they were a bit scrunched in the toe pockets of the Bikila, but not to the point where they were forced to bend. It was more like they filled the toe pockets completely and were in contact with the rubber at the tip (I consulted the Vibram fit page, and was reassured that having my toes “graze” the tips of the pockets was ok). I was concerned that this might lead to some friction blisters on runs, but this fear turned out to be unwarranted, at least in my first short jaunt.

The Bikilas are much more form fitting than the KSO’s, and they really kind of feel like a second skin that covers your foot. Another difference when compared to the KSO is that the Bikila has a pronounced toe spring, which is the upturning of the toes that you can see when looking at the shoe from the side. Toe spring is common in running shoes, and although some people don’t like it in a minimalist shoe, it has never really bothered me. Finally, the inside of the Bikila is very soft, and extremely comfy – these are definitely meant to be run in without socks (see interior image below). 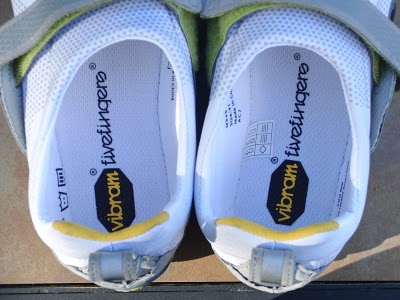 Interior of the Vibram Fivefingers Bikila

I was told by my contact at PBEG that Vibram is marketing the Bikila strictly as a running shoe, and not to expect it to feel like an all day walk-around shoe like the KSO – this description is very accurate. If I’m planning to wear a pair of VFF’s out and about, I’ll opt for my KSO’s. If you’re looking to buy a pair of Fivefingers to use as an all-around walking and running shoe, the KSO might be a better choice. However, if you want a pair of Fivefingers to use strictly for running and working on form, the Bikila might be the way to go (I’ll withhold judgment for now until I put in more miles in the Bikila).

So how did they perform on the run? After getting the kids ready for bed, I grabbed Jack and headed out for a quick 2 mile run just to get a sense of how they would feel out on the road. I immediately realized that the snugness that I had initially though migh be a negative was actually a positive on the run. Because the Bikila is so much more form fitting than my KSO’s, there was almost no rubbing or friction anywhere between the shoe and my foot (I get back-of-heel blisters when I run sockless in my KSO’s, which is one of the reasons I opted to size down in the Bikila). It almost feels as if the Bikila is molded to your foot, and as it got wet with sweat, the upper material seemed to soften a bit and comfort increased even more. While running in the Bikila, I was clearly landing on the forward half of my foot, and the shoes make a cool tapping sound when contacting the ground. I’ve heard some people express disappointment with added cushioning in the Bikila, but to be honest it didn’t feel a whole lot different to me – maybe a tad more rigid. It’s hard to say much after only two miles, but if first impressions are any indication, I think I’m going to like running in this shoe. Stay tuned! 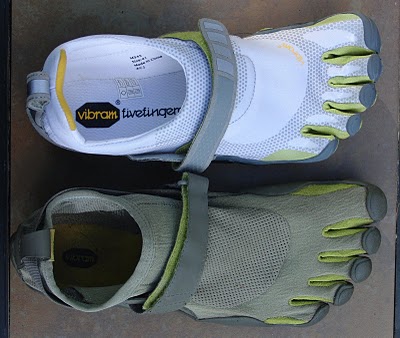 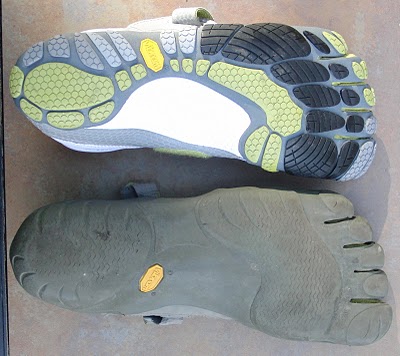 Vibram Fivefingers Bikila (left) and KSO (right). Note the toe spring (upturned toes) in the Bikila as compared to the KSO.