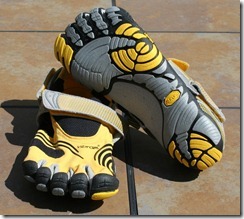 For the first few years after I started running, the 5k was my preferred race distance – in fact, my 5k PR (18:51) was set back in 2008. Like many runners, I was quickly bitten by the marathon bug and focused most of 2009-2010 on long distance races. I’ve run only a handful of 5k’s since setting that PR, and to be honest, I miss the short distances. I enjoy speed work more than long, slow distance, and there’s nothing quite like the feeling of simply cutting loose and letting my legs have a little fun. It was therefore with some excitement that I decided after completing an Ultra and the Boston Marathon earlier this year to take a break from long distances and focus instead on speed.

Despite my preference for minimalist shoes, one thing that I had not done until last week was run a race in zero drop shoes. Last Thursday there was a 5k in my home town of Concord, NH, and my wife graciously offered to handle the kids for the evening so that I could go and run it (the deal was predicated on my son getting a good afternoon nap, but he came through nicely!). I had run a sub-19:00 solo 5k time trial earlier in the week, so I knew I wasn’t going to be running on the freshest of legs, so I made a choice to have some fun with the race and run it in a pair of Vibram Fivefingers. I’ve long wondered how well I could race in the Vibrams, and this was as good a chance as any to find out. Given that the course would be a mix of gravel, grass/dirt, and road, I opted to use my Vibram Komodosports since they seem to offer a bit more cushion underfoot than my VFF Bikilas or TrekSports. I’ve had the Komodos for a few months (disclosure: they were media samples provided by Vibram), and though I had not put a lot of miles on them, they are similar enough to the others that I wasn’t too concerned about racing in them.

The KomodoSports are in many ways quite similar to the VFF Bikilas. Aside from a considerably more aggressive appearance, the following are to me the most noticeable differences between the two shoes:

1. First and foremost, the Komodosport has a removable insole (see photo at right). Underneath the insole is a rough material that seems to directly overlie the outsole, so most of the cushioning appears to be built into the insole. It would have been cool if Vibram had made the material under the insole similar to the lining of the Bikila so that the wearer could have the option of running with or without it (Vivobarefoot shoes do this particularly well). Running without the insole would allow for a much firmer ride, better ground feel, and would likely help accommodate a slightly higher volume foot.

2. The Komodosport doesn’t fit quite as snugly on my foot as compared to the Bikila – it’s a bit more like the TrekSport in terms of fit. This makes it better as a walk-around shoe, as the tightness of my Bikilas can get constricting when I’m not running in them. The Komodosports fit me just about perfectly, and the addition of the strap over the heel allows for a bit more adjustment than is offered on the Bikilas.

In my opinion, most of the other differences between the Komodsport and the Bikila are largely cosmetic. When compared to the Treksport, the most obvious difference is the sole – the Treksport has a thicker, treaded sole that feels much firmer underfoot. I would have worn these for the race given the off-road portion, but I prefer the slightly more cushioned feel of the Bikilas and Komodos on the road (cushioning here is a relative thing, as even the Bikila and Komodos are far less cushioned than the vast majority of shoes that I own). Since it was a split course – half on- and half off-road – the Komodos were a reasonable compromise. 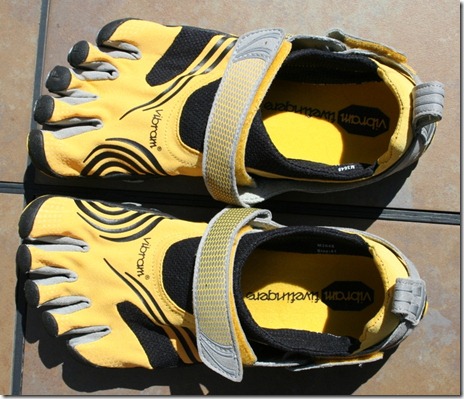 I really didn’t know what to expect when it came to racing in the Vibrams. I’ve run a fast mile or two in them, but never a race effort for 3+ miles. It was a hot and humid day (mid 80’s – the hottest day of the year so far in NH, and I’m not yet acclimated), and as mentioned my legs were still recovering from a hard 5k effort earlier in the week. Furthermore, the course had a lot of twists and turns, as well as an overpass that needed to be climbed twice around mile 2.

When the gun went off, I took off at a sub-6:00 pace and felt pretty good. I settled into my typical low 6:00 5K pace as we approached the trail section, and to be honest I barely noticed my feet – everything felt quite natural. From mile 1 to mile 2 I passed 3-4 other runners, and hit the overpass with a goal of not getting passed in the final mile. My pace wavered on the overpass, popping above 6:30 for a bit, but I held strong after looping around and back over a second time on the way back to the finish (this was an out and back section on roads). I managed to drop my pace back down to the low 6:00’s for the final 3/4 mile, and wound up crossing the finish in 19:30. That put me in 7th place overall, and I wound up winning the 30-39 age group – not bad considering that it was the first 5k I’ve run in nearly a year! It was a small race, so the finishing place is not quite as impressive as it might sound, but 2 of the people that I passed around mile 2 were in my age group, so I felt great about digging out that win.

At the finish a bunch of people asked me what it was like to run in my toe shoes, and I happily explained that it was my first time, but that the experience was a good one. The only issue I had was a hot spot that developed under one of the seams at the edge of the black mesh panel behind the little toe. To be honest, my finish time was right about where I would have expected given the heat and my physical state, and I don’t think I could have run it any faster in regular shoes. I barely knew I was running in Vibrams for most of the race, and though I can’t say they made me any faster, they certainly did not hold me back any. There’s probably no way I could have done this 2 years ago when I first started running in Fivefingers, and it felt great to know how far I’ve come in being able to perform in an ultraminimal shoe. If you’re legs/feet are well adapted, I highly recommend giving it a try.

All in all, the Komodosports are a nice addition to my lineup of Fivefingers, and there’s certainly no avoiding being seen when wearing bright yellow toe shoes with tiger stripes. I must admit that it felt pretty good to accept my AG win in these shoes, for if nothing else it demonstrates that wearing a “barefoot” running shoe doesn’t automatically slow you down. Now my goal is to go after my 5k PR – I’m pretty confident that it will be going down soon.