Vibram Fivefingers on Wired.com: The Barefoot Running Trend is Growing 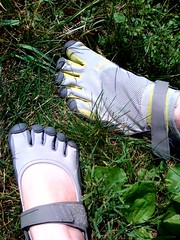 A few days ago, Wired.com posted a story on the Vibram Fivefingers running shoe/foot-glove (not sure exactly what to call it, but you can see an image to the left). If you’re not familiar with this contraption, it’s basically a glove-like shoe that allows you to essentially run “barefoot” with just a thin layer of rubber between the sole of your foot and the ground. They look strange due to the presence of individual “toe-pockets,” but have gained a lot of buzz as barefoot running has increased in popularity. They first came to my attention after reading the book “Born to Run” by Christopher McDougall (see my review of “Born to Run”), and I’ve been going back and forth on whether to shell out the $70+ to buy a pair and try them out for myself.

The main reason for this post is that in addition to the interesting article on the Fivefingers, Wired also posted a video review (see below; Wired’s text review is here) that contains some interesting video of people running barefoot, in the Vibram Fivefingers, and with traditional running shoes on. What is really striking (no pun intended!) from watching this is how different the footstrike is in the typical running shoes – the built-up heel obviously contributes to a tendency for heel-striking in runners wearing them.

If you read the scientific literature on the hypothesis that humans evolved to be distance runners (as an evolutionary biologist and human anatomy instructor myself, I’m fairly well convinced of this), you’ll read about the importance of the human Achille’s tendon as a shock absorber (see, for example, the Bramble and Lieberman articles cited in this post), and the fact that our nearest relatives (i.e., chimps) lack this key structure. It’s clear from the Wired video that midfoot striking when barefoot or in Fivefingers takes advantage of the shock absorbing properties of the Achille’s tendon. Basically, when you land on the forward half of your foot, it pulls the Achille’s tendon, located on the back of your ankle, downward. This stretches the tendon and the calf muscles attached to it. This explains why people beginning to run barefoot often experience soreness in the Achille’s or calf muscles as they acclimate to the new style (and why it’s best to ease into barefoot running slowly).

So, if midfoot striking is indeed the “natural” way to run (see this excellent and even-handed post from the “Science of Sport” for a discussion of this controversial idea), it’s clear that barefoot running and running in the Fivefingers accomplish this far better than traditional running shoes. Watch the video below and you can see for yourself:

So, will I buy the Fivefingers? If for no other reason than to try them out, I’m leaning toward getting a pair. If I do, I’ll be sure to post a review.