It appears that Vibram is responding to the growing popularity of the Fivefingers line of “barefoot-like” footwear among runners by designing a new model that directly targets the running market. As reported on Justin Owings Birthday Shoes blog, the VFF Bikila, set to be released in early 2010, appears to be most similar to the existing VFF KSO. However, it features a number of departures from the KSO design – among the most noticeable are a redesigned, dis-articulated tread, a more traditional, padded lip around the ankle, and removal of the rear ankle-strap found on the KSO’s. Below are pictures re-posted (with permission) from Birthdayshoes.com: 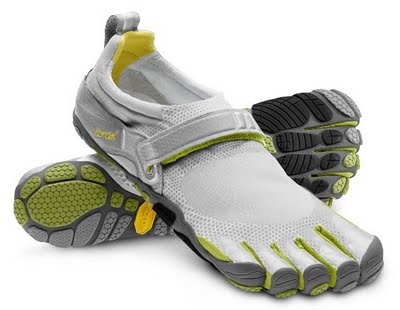 The New Men’s VFF Bikila (from Birthdayshoes.com). Note the re-designed tread and padded lip around the ankle – both are big changes from the KSO’s that should enhance the VFF running experience. 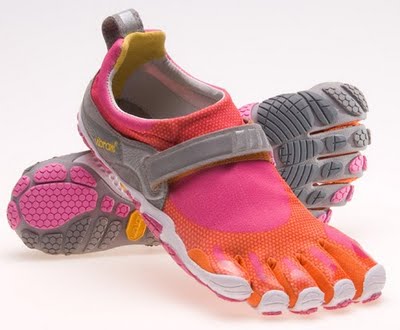 What excites me the most about the Bikila is the redesign of the ankle-lip – I’ve had blistering issues on the back of my heel when running sockless in VFF KSO’s (since solved by wearing Injinji socks), and this redesign looks like it might solve this problem and allow for more comfortable sock-less VFF running. For more, view Justin’s post on the new Bikila at the Birthdayshoes.com, or view this post showing a video interview in which Vibram CEO Tony Post introduces the new VFF line.