Home / Blog Posts / Walking in Marathons: Does it Disrespect the Race?

Walking in Marathons: Does it Disrespect the Race? 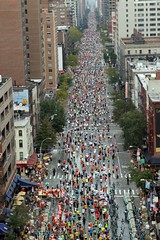 I recently read an article on the Well Blog of the New York Times titled “Better Running Through Walking.” The author, Tara Parker-Pope, is training to run the New York City Marathon in November and is chronicling her journey on the NYT website (see Run Well on the Well Blog here). Her article on Run-Walking basically outlines an approach to marathon running championed by running coach Jeff Galloway in his book “Marathon: You Can Do It.” The basic idea is that taking walk breaks throughout a marathon can ease the impact on the body and make it easier to finish without pounding yourself into the ground. The approach makes a lot of sense for newer runners or those who wish to reduce strain on the body during the race, and it is the approach the author plans to use when she runs NY.

The article in and of itself is not all that controversial – it’s the comments that followed it that really fired me up. Several posters felt the need to chime in and say that walking disrespects the dignity of the marathon (see comments 12, 13, 17, and 18 for examples), and that somehow those who walked during a marathon haven’t earned the right to say that they “ran a marathon.” The underlying implication is that walking “bastardizes” the marathon. I felt compelled to respond, and posted the following comment:

“To those bashing people who walk during a marathon, I suggest you sit at the finish line and watch people coming in between 5 and 6 hours. Ask yourself if they are not pushing themselves to the limit. Ask yourself if they are not in pain. Sure, some have not put in the ideal amount of training, but many have, and are doing something that is an incredible accomplishment for their level of fitness. I respect anyone who finishes a marathon, whether they run, walk, or crawl.

On another note – look at Ultramarathoners. They run a longer distance than the marathon, and walking is normal for parts of the race in all but the most elite. Being able to “run” an entire marathon is an accomplishment to be sure, but lets not take away from those who are challenging themselves to reach what many think is an impossible goal.”

I truly believe that anyone who puts in the effort to traverse 26.2 miles on foot is deserving of the title of “marathoner,” regardless of how they covered that distance. If you cross that finish line at the end of a marathon, you have accomplished something that less than 1% of people on this planet have accomplished, and it doesn’t matter how long it took. It irritates me that some “purists” feel the need to take away from the accomplishments of others with snide comments, and it’s a shame that they can’t simply respect those for whom completing a marathon is monumental undertaking requiring dedication and physical effort beyond anything they have ever done before.

What do you think? Does walking in a marathon diminish the accomplishment or is it just an additional method to achieve the goal of finishing the race?

You just finished reading Walking in Marathons: Does it Disrespect the Race?! Consider leaving a comment!