What are Minimalist Running Shoes?

The flurry of new “minimalist” running shoes being released onto the market can be hard to keep up with these days. An article in Advertising Age recently reported that “according to SportsOneSource, lightweight products — loosely defined as shoes that weigh 9 oz. or less in a men’s size 9 — accounted for 28% of the running category in the second quarter. Minimalist styles, a subset of lightweight, accounted for 5% of the running category.” In the same article, Katherine Petrecca, collection manager for New Balance’s minimal line, was quoted as saying “Once you’ve made the transition [to a minimal or lightweight product] it’s difficult to go back. What will happen in the more mainstream channels remains to be seen, but in performance and specialty channels, it’s here to stay.” I would tend to agree with her, as I can’t possibly imagine myself ever going back to a more traditional running shoe after having made the switch to more minimal styles.

When statistics like these are released, I often ask myself which shoes are included in the various categories – it’s easy enough figure out which shoes weigh less than 9 oz, but which shoes are included in the “minimalist” group? If I had to guess, it’s probably things like the Vibram Fivefingers and Merrell Barefoot shoes, but I can’t be sure from the information provided. Would the New Balance Minimus Trail be included? How about a zero drop shoe that is well cushioned like the Altra Instinct?

It’s because of this ambiguity that I don’t like using the term “minimalist” to describe a specific category of shoes. I had a lengthy discussion in the comments section of a recent post about what constitutes a minimalist shoe, and though I have my own personal preferences when it comes to footwear, I repeatedly made the point that I don’t view minimalist as a category, but rather one end of a spectrum. I thought I’d use this post to elaborate a bit on my usage of the word “minimalist.”

If we view running footwear as a spectrum, on one end you have no shoe at all, or barefoot. In the barefoot condition cushioning and stability are provided by the inherent strength and control of the feet and legs, proprioreception/ground feel are maximized, there is no added weight on the lower extremity, the heel and forefoot are placed at the same level on the ground, the splay of the foot is not restricted when it contacts the ground, and flexibility is limited only by the structural limitations of an individual’s feet. Thus, more minimal shoes will:

a. require a runner to rely more on their own feet and legs to take care cushioning and stability

b. provide less sensory interference between the sole of the foot and the ground

c. have a lower height differential between the heel and forefoot (i.e., a lower heel-forefoot drop)

e. be wider in the forefoot to allow splay on contact

There are other factors that could be included here, but for me these are the most critical. 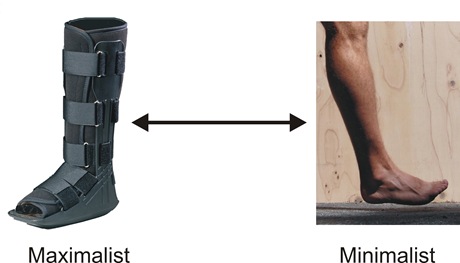 At the other end of the footwear spectrum, you would have footwear that attempt to use technology to control and stabilize the foot, extensive cushioning that dampens impact shock (but also impedes ground feel), greater heel-forefoot differential, typically heavier weight, and less flexibility. I don’t know what would be the best term to describe this end, but “maximalist” has been thrown about a bit here and there. Perhaps something like “Technological” might be more palatable, or “Cushion/Control.”

A shoe at the “Cushion/Control” end of the spectrum is one that attempts to do the work for you (whether it succeeds in this is an entirely different discussion…). It is a shoe that people use because they cannot or do not desire to rely on inherent control of things like cushioning and stability. You might view the extreme at this end as a walking boot used to treat stress fractures – a completely restrictive and controlling form of footwear.

The reality is that nobody is going to run in a walking boot, and few are going to run barefoot with any regularity. So, if we view the footwear spectrum in the context of running shoes, we might have motion control shoes like the Brooks Beast at one end, and barefoot-style shoes like the Vibram Fivefingers at the other. So our spectrum might begin to look like this:

Until recently, the vast majority of shoes found at shoe stores sat firmly on the left-hand side of this spectrum, with a few racing flats sprinkled around over to the right. With the recent influx of lightweight and more minimal shoes, the full spectrum is starting to fill out a bit, and a diversity of options are available to each runner (this, to me, is the most significant outcome of the minimalist movement). There are certainly shoes that will be hard to place along a spectrum like this (e.g., Newton shoes, the Altra Instinct), mainly because shoes can vary in so many ways. You might have an extremely lightweight shoe like the Brooks T7 Racer that has considerable cushioning and a standard 12mm heel lift. You might have a shoe with a small heel-forefoot drop that is fairly inflexible (e.g., New Balance Minimus Road) or that has pronation control technology (e.g., Saucony Mirage). Furthermore, within this spectrum there are also fairly well defined sub categories. Motion control shoes, stability shoes, racing flats, trail shoes, cross-country flats, and barefoot-style shoes (my preferred term for what some call the “minimalist” category) are all reasonably well-recognized groups.

Ultimately, I think a more complex way of classifying shoes might be helpful. Given enough quantitative data on a given suite of shoes, it might be possible to apply a multivariate statistical method like principal components analysis to identify clusters of similar types of shoes (would love to try this, but need to find the shoe data…). You could input parameters like weight, heel-forefoot differential, midsole durometer, midsole thickness at various locations, forefoot width, forefoot depth, etc. and get a sense of which shoes are most similar. I’m a stats geek, so this kind of thing intrigues me.

Finally, I think it’s important to emphasize that minimalist need no be the end goal for all runners, particularly if they are doing just fine in their current shoes. There are transition risks involved with running in shoes at the minimalist end of the spectrum. Similarly, a barefoot runner who suddenly decides that the Brooks Beast will be their next footwear choice should be just as wary. Bad things can happen when a dramatic change is made too quickly.

I’m not sure if this is at all helpful, but it’s something I’ve been thinking about for some time, and given the amount of time that I spend writing about “minimalist” footwear, I thought it might be helpful to better explain how I view things.

I’d love to hear what you think – feel free to leave a comment!

You just finished reading What are Minimalist Running Shoes?! Consider leaving a comment!