Home / Blog Posts / Why a majority of runners, even among international elites, are heel s

Why a majority of runners, even among international elites, are heel strikers by Blaise Dubois 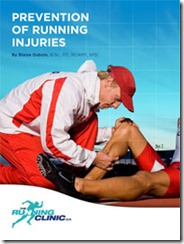 Below is the text of a newsletter that my friend Blaise Dubois, a physiotherapist from Quebec City, just sent out regarding the topic of heel striking. If you don’t subscribe to Blaise’s newsletter, I recommend that you do – he sends out a lot of interesting information, and posts like this one are great for sparking debate and discussion – you can subscribe here.

I “modified” the English a bit in the post below – hope that’s ok Blaise – and have included my comments where appropriate in blue italics.

Phobia of heel striking is starting to reach runners who, seeing themselves in action on pictures, are questioning their biomechanical effectiveness. And they are right to be concerned because some with heel strikes experience negative consequences to their performance and the incidence of injuries. Here are some related explanations.

10 things to know about runners heel striking, answering the question “Why a majority of runners, even among international elites, are heel strikers?”

1. Pictures rarely reveal reality. Only rely on high definition cameras or a highly experienced eye. A picture taken just before the impact loading will show the foot in dorsiflexion (pointing upward) for a majority of runners.

(RB – I agree completely on this one, race photos can often be deceiving, and they capture a moment in time from what is a very dynamic and rapid set of movements. High speed video is necessary to accurately classify foot strike.)

2. 60% of high level athletes running road race (even international elites) are heel strikers… (Note that they all use “racers” running shoes with heel-toe vertical drop of 4-10mm … a technical aspect of the shoe that promotes heel striking!)… but 90% of track athletes are forefoot strikers.

3. The majority of these good level athletes, however, have what we call a”prorioceptive heel strike” (the foot flattens smoothly as soon as it hits the ground). We believe this way the foot grounds is no more harmful and no less effective than midfoot or forefoot striking because it doesn’t involve a strong braking phase or brutal impact force.

(RB – Another good point. I have seen Blaise lecture on a few occasions, and he’s very clear that all heel strikes are not the same, and that being a “heel-striker” is not necessarily a bad thing. For example, check out Abebe Bikila’s “proprioreceptive” heel strike in the video in this post and in the photo below. I have gotten emails from runners expressing frustration that they cannot stop heel striking. My general take would be that if you are running well and injury free, your mechanics are otherwise ok, and your heel strike is not extreme, then don’t worry about it.) 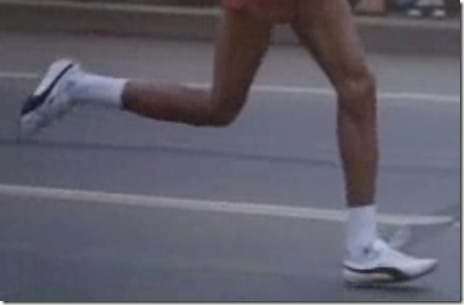 4. The further we go back in the race pack, the more heel striking we encounter, and the more that “proprioceptive” heel strikes give way to extreme heel strikes.

(RB – I would classify an “extreme” heel strike as one in which the foot is highly dorsiflexed on contact, usually with the lower leg (shin) angled forward from the knee (i.e., an extended knee). The angle between the bottom of the shoe and ground can sometimes approach 45 degrees (see photo below and compare to Bikila above)! Incidentally, I would say that an extreme forefoot strike might be just as bad, especially if the heel is not allowed to contact the ground. For myself, when running shod, I tend to  shoot for a midfoot strike, but don’t much mind if I move a bit toward the heel or forefoot – I probably do all three quite regularly. Just my opinion, but a range from mild heel to mild forefoot is probably fine.) 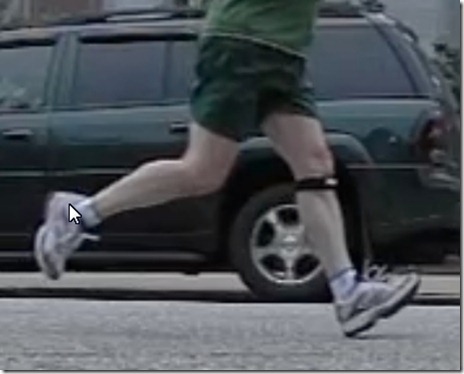 5. Over 80% of barefoot runners do not heel strike… and 20% of them have a “proprioceptive” heel strike.

(RB – in other words, it would be very unlikely to see a barefoot runner landing with the sole of the foot angled 45 degrees relative to the ground. You can heel strike barefoot, but an extreme heel strike would do damage quickly. Running surface will also likely play a role in the exact nature of the barefoot foot strike.)

6. The heel strike is not the only thing to look at. A heel strike may be acceptable if the shinbone is vertical (RB – as in Bikila above), the knee is bent, and the impact loads just in front of the center of gravity. A biomechanical analysis must therefore be global. The 4 biomechanical clues which often combine and express the same problem are:

A. less vertical orientation of the tibia/shinbone (RB – i.e., reaching with the lower leg as seen in the photo above)

C. ground contact far ahead of the center of gravity (RB – again caused by reaching with the lower leg as seen in the photo above)

D. the heel strikes the ground first (RB – the thing that most people focus on, but maybe not best to focus on in isolation if other factors are ok)

(RB – a good example of where it is important to consider all of these factors is Meb Keflezghi (see photos below from Boston [top] and NYC [below]). He has a fairly prominent heel strike, but his lower leg, though still angled forward a bit, is more vertical than in the extreme heel striking runner shown in the photo above, particularly in the NYC Marathon photo. Meb is an example of a guy that compete at a very high level with what at times appears to be a pretty big heel strike, so there are exceptions to every rule.) 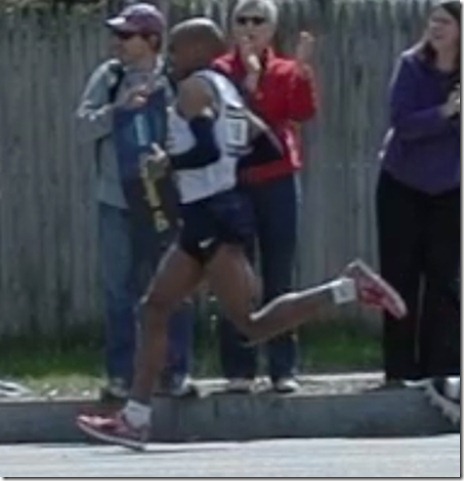 Meb Keflezghi in the 2010 Boston Marathon (note, the location was not as downhill as it appears in the photo – camera angling was off) 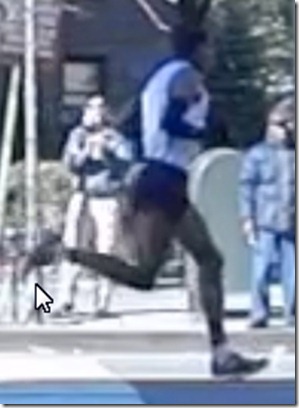 Meb Keflezghi at the 2010 NYC Marathon

7. We do not know (scientifically) if local, national or international level athletes would improve biomechanical effectiveness over the long term by making technical efforts to run better (correcting points A B C and D)… but the trend suggests that it is possible!

8. The majority of athletes have developed bad habits caused by shoes that affect their biomechanics. They mostly train (up to 80% of their training volume) with cushioned shoes with a big heel-toe differential, a type of footwear which promotes less efficient biomechanics and a larger heel strike. Their biomechanical learning is consequently different from their biomechanical performance, which may explain why many of them retain these biomechanics when in competition.

(RB – in other words, perhaps we should do more of our training in the shoes that we will compete in so that we can properly train our bodies to be acclimated to the biomechanics needed on race day.)

9. I think if athletes incorporated more barefoot training, ran 100% with their performance shoes, and if their competition shoes were “heel-toe zero differential”, we would see slightly different biomechanics and most likely improved performance for some … simply by improving their “running economy”!

(RB – I would qualify this a bit. In order to run a long race like a marathon in zero drop shoes, one probably needs to do most, if not all of their training in zero drop shoes. I have seen many forefoot runners early in a race fall back on their heels later on – it can be very tiring on unadjusted calf muscles. But, it gets to the point – we need to acclimate in training to what we will be using in competition. I don’t train exclusively in zero drop shoes, so I generally don’t run races in them either.)

10. I think if recreational runners incorporated more barefoot training, ran 100% with performance shoes, and if these “racer” shoes had “heel-toe zero differential”, we would see much different biomechanics and improved performance for the vast majority… simply by improving their “running economy”!

(RB – I agree. Incorporating some amount of barefoot work can be a great addition to almost anybody’s training repertoire. Lately I’ve been doing a bit of barefoot running on concrete/asphalt, and must say it has been quite enjoyable. Blaise even inspired me to run a mile barefoot last week when we were out in Boulder, and I went for a long barefoot walk yesterday with my family. You don’t need to go barefoot full-time, but small amounts can be a great way to get more in-tune with your stride mechanics.)

Feel free to share your thoughts in the comments!

You just finished reading Why a majority of runners, even among international elites, are heel strikers by Blaise Dubois! Consider leaving a comment!