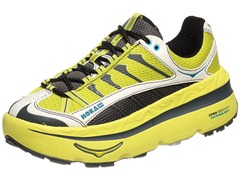 A measurement that has come to dominate a lot of discussion about running shoes these days is heel-toe drop. Simply defined, heel-toe drop (or simply “drop”) is the difference in outsole+midsole+insole height (known as stack height) between the heel and forefoot of the shoe. In other words, it compares the amount of “stuff” between your foot and the ground in the heel and forefoot. Yet another way to look at it is that in a 4mm drop shoe, the heel would sit 4mm above the level of the forefoot.

Several weeks ago my friend Kurt, who is part of the design team for the Go series at Skechers, asked me a question that got me thinking. He asked if I though that a cushioned zero drop shoe could actually be functionally a negative drop shoe for a heel striker (i.e., heel thinner than the forefoot in this case).

The thinking here is that a heel striker lands on the heel first and compresses it (making it thinner), then rolls forward onto an uncompressed forefoot (which is thicker) – watch this pressure tracing of a heel strike from Daniel Lieberman’s lab to get an idea of how things changes as the foot rolls forward. This thinking seems logical, and is of interest because it could have the consequence of increasing work on the calf and Achilles tendon.

You might say that people shouldn’t be heel striking in zero drop shoes. The reality, however, is that a lot of people do. I have plenty of video of people heel striking even in Vibram Fivefingers, which have very little cushion at all (see below). 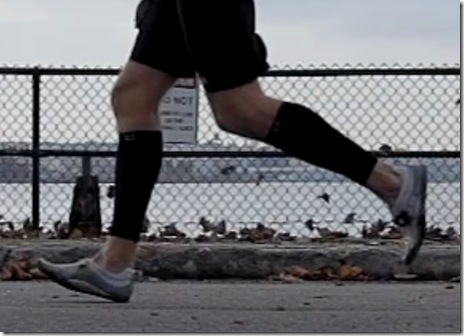 Now, suppose someone does adopt a forefoot strike in a cushioned zero drop shoe – here’s another pressure tracing showing a forefoot strike from Daniel Lieberman’s lab. This runner would initially compress the forefoot, then settle briefly back a bit onto an uncompressed heel, and finally roll back forward. Functionally, this zero drop shoe might be behaving a bit like one with a small heel lift.

Following both of these previous examples, a midfoot striker (here’s the midfoot strike pressure tracing) who lands in a cushioned zero drop shoe contacts along roughly the entire lateral margin of the foot/shoe, and thus might compress both heel and forefoot simultaneously. In this case, the shoe functionally behaves like a zero drop shoe.

The above suggests to me is that in a cushioned shoe, functional drop may vary somewhat with foot strike type. Furthermore, this variation will likely be exaggerated as stack height and cushioning softness increase (with an extreme example being the Hokas at the top of this post – they probably behave functionally as a zero or negative drop shoe for a heel striker since they are soft and low-drop to begin with). The more squish on initial contact, the less precise the static drop data will be for a heel or forefoot striker. In contrast, if you run in a shoe with no (or very little) cushion like the Inov8 Bare-X 180, Altra Samson, or a huarache sandal the shoe will behave the same way no matter which way you run since there is very little material to compress.

I wrote this post because I’ve noticed that heel-toe-drop is not a perfect determinant for whether or not I will like running in a given shoe. For example, one of my favorite shoes right now is the adidas Gazelle, which at 6mm drop has a higher differential than most other shoes I run in. However, because it has a firm forefoot with quite a bit of outsole rubber, it actually doesn’t feel a whole lot different on the run than the softer, zero drop Saucony Hattori LC.

I can tolerate a bit higher drop in a shoe if the sole is on the soft side since I’m less likely to forefoot strike in it, and the heel will compress a bit if I land slightly back toward that end. I’m not a big fan of extremely firm shoes unless they have a low stack height. It also might explain why it’s a lot harder on the calves to run with a forefoot strike in a shoe that is zero drop with no cushion since it forces the calf to work through its full range of motion – I like barefoot-style shoes for shorter runs, but don’t use them for runs much longer than about 5 miles for this reason. Conversely, I can run in zero drop, cushioned for long distances without issue.

I guess the point is that the way a running shoe will work for a given person depends on a lot more than just one single factor. Choosing a shoe because it has a medial post, or a certain cushioning technology, or now because it has a particular heel-toe-drop oversimplifies things, and a lot of considerations need to be made when looking for the right shoe for you. Drop is important, and I do feel like it affects how my feet and legs behave when I run, but interpreting the significance of a given drop number probably also requires thinking about things like foot strike type, stack height, and cushioning firmness. As always, things may be more complex than they seem!