Home / Blog Posts / Why I Continue to Run in Minimal Shoes

Why I Continue to Run in Minimal Shoes 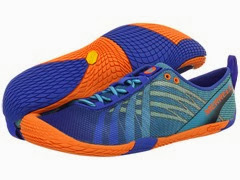 I started running in “minimalist” footwear over 4 years ago. Since that time I’ve set PR’s at nearly every race distance, and have only had one injury that bothered me enough to seek out professional help (a bout of plantar fasciitis that did not curtail my training, and that somewhat perplexingly went away when I increased my mileage). In most respects, my running has been going very well for quite a long time.

While it’s tempting to credit my good health and running success to my choice of footwear, I’d be naïve if I did so. The truth is that I didn’t get injured in two years of running prior to going minimal, and my race success is more likely due to the fact that I was becoming a more experienced runner and I was training harder. Beyond the effect of reduced weight, my shoe choices probably had very little to do with my personal racing achievements.

As a shoe reviewer, I now run in all kinds of shoes. I run in everything from ultraminimal, barefoot-style shoes to 8mm drop cushioned trainers (I still avoid more traditional 10-12mm drop trainers). The specific mix varies depending on which reviews I’m working on at any given time. Lately, however, I’ve been running a lot in ultralight racing flats (Mizuno Universe 5 and Asics Blazing Fast), and a few days ago I went for a five mile run in the Merrell Vapor Gloves (one of the most minimal shoes I’ve run in). Spending a few weeks running mostly in very minimal shoes has reminded me why I continue to do so: it’s fun!

I don’t continue to run in minimal shoes because I think they keep me healthier or make me faster than when I run in traditional shoes, I run in them because I enjoy running in them. I like feeling the ground under my feet. I feel stronger when I run without supportive footwear. And I love the feeling of freedom afforded by a pair of shoes that weighs under 5-6 oz. While I certainly see a role for using shoes as tools to mange injuries or for specific race purposes, my personal choice is driven entirely by comfort and enjoyment, and that’s good enough for me.

How about you? If you run minimal, what’s your main reason for doing so?

You just finished reading Why I Continue to Run in Minimal Shoes! Consider leaving a comment!