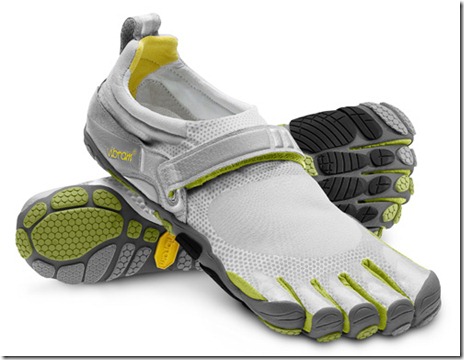 I recently updated my minimalist running shoe guide, and rather than trying to list every minimalist shoe out there right now, I opted instead to recommend what I feel are some good options in several different categories. Right after the post went up, several people on Twitter asked me why I had not included any of the Vibram Fivefingers shoes in my lists. This post is my attempt to answer that question.

I have a fairly long history with the Vibram Fivefingers. I started running in KSO’s back in summer 2009, and they were my first truly “barefoot-style” shoe. I loved running in them, and they were the first shoe I had worn that really let me feel what a forefoot strike feels like. I’ve since tried the Bikila, TrekSport, Komodo Sport, and Komodo LS. Of these, I’ve put the most miles on the Bikila, but honestly have not run very much in Vibrams of late.

My reason for moving away from the Vibrams is that I find that when I run in the newer models that fit tighter and have more substantial soles, my right forefoot starts to ache under the region of the second metatarsal head after a few miles. By the end of a run all I want to do is rip the shoes off and wiggle my toes. I have heard similar reports from a number of people, and this post was actually prompted by the following report on a forum that I participate in:

“Thought I’d share this out, as I think I may have finally sussed out
the reasons why my forefeet have been hurting so badly on my lunchtime
runs.  My forefeet, just behind my second toes, have started hurting
like hell – like somebody had beaten on them with a ballpeen hammer –
when I run in my VFF’s.”

This describes quite well my experience, though my issue is more an ache than a sharp pain. This morning I decided to try an experiment – I walked my kids to school in VFF Komodos. My right forefoot was aching after we got to the school, so I took the shoes off and walked home barefoot. Ache went away almost immediately.

Why does this happen? My theory, at least for my own situation, is that the Vibrams actually restrict flexion and extension of my toes to quite a considerable degree (and also toe curling). I find it very hard to bend them up or down while wearing most of the VFFs I have, whereas in a shoe with an open toebox they are free to wiggle and curl as needed.

Why is this important? I think it’s because the toes initially need to flex upward just prior to ground contact (watch this video to observe this happening in barefoot runner), and then they need to flex downward to push onto and grip the ground (or sole) during stance, which takes some of the load off the metatarsal heads. Limiting flexion and extension of the toes messes up both of these processes.

So what is it about the toe pockets that does this, aren’t they supposed to allow greater toe freedom? Yes and no. I like that the toe pockets spread my toes out, but I find that my four little toes like to work as a unit, and it’s very hard for them to flex and extend the individual toe pockets, particularly when there is rubber connecting the forefoot to the toes. This is exacerbated by fit – I have a size 42 in KSO’s, which is a bit too long and there is quite a bit of space in front of my toes which causes the tips to catch the ground from time to time, and I have size 41s in the other shoes – in the others my toes fit snugly and reach but don’t push against the tips of the pockets, but by fitting snugly the material on top of the toe pocket gets tight and makes it very hard to flex the toe down. Of the VFFs I own, my KSO’s allow for the most flex, which is a combo of the fact that the toes are a bit long and the upper material is very stretchy (though the rubber connecting the toes to forefoot still limits my toe flexion to a degree).

As a result of this, I’ve grown very hesitant to recommend Vibrams to people wanting to try a barefoot-style shoe for the first time. Metatarsal stress fractures are one of the big concerns when it comes to transitioning to a very minimal shoe, and I worry that shifting load to the metatarsal heads might contribute to this, and that this could be further exacerbated in people with a long second metatarsal (Morton’s foot). Getting the right fit is critical, and this can be tough with the Vibrams, especially if you fall between sizes as I think I do.

Although I have concerns, I should also point out that I know plenty of people who love their Vibrams for running and who have no issues with them. So I do think they can be a great match if you combine the right pair in the right size with the right person. But, it’s hard for me when making a recommendation to know who will have success and who will have trouble, so I tend to avoid recommending them these days for running. There are lots of other options out now that give a similar type of ground feel and that don’t have the toe pockets, and some of these shoes are excellent (check out my minimalist shoe guide for some examples) – these options were not available even just a few years ago when the Vibrams got popular.

If I had to give advice to Vibram, I would say the following. Sales of the Fivefingers are slowing considerably, and part of this is that the toe-shoe fad is dying down. But, there will be a core of people who will still use them, and I see people in them in my home town quite often. Part of the problem I think is that Vibram responded to the popularity of the Fivefingers by pumping out a ton of new models, some of which were downright ridiculous (fashion boots???). I’d suggest focusing on a smaller number of models and making sure to get them as dialed in as possible for the purpose they will be used. If it’s a shoe meant for running, make sure the toes can properly flex and extend. Perhaps find a way of disarticulating the sole under the toes from the sole under the forefoot. Make the fabric on top of the toe pockets much stretchier, as it is in the KSOs. The new Vibram Seeya looks promising, and I’m hoping to give them a try to see if they improve on this (can anyone who had tried the Seeya share some thoughts?).

The bigger issue, and perhaps my biggest piece of advice, would be to make half-sizes. Proper fit is critical in these shoes as having toe pockets that are too short or too long can both cause problems. I’m pretty sure a size 41.5 would solve most of my issues with these shoes. You might even consider making a Vibram Morton for those with a long second toe I have no idea how costly it would be to increase size availability, but if it came at the expense of cutting some of the superfluous models, I’d see it as a very positive thing for the line. Trim the fat, and focus on making the core as good as it can be.

Anyone else have thoughts on the Fivefingers? Have you experienced toe flexion problems or forefoot ache in these shoes? Any suggestions for how to improve the line? Leave a comment!

You just finished reading Why I Didn’t Include Vibram Fivefingers in My Updated Minimalist Shoe Guide! Consider leaving a comment!