Home / Blog Posts / Why the Mizuno Sayonara Does Not Work For Me: Technology and A Tale of

Why the Mizuno Sayonara Does Not Work For Me: Technology and A Tale of Two Shoes 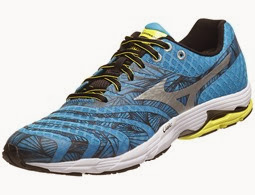 I’ll start this post by stating clearly that people can respond very differently to a given shoe depending on idiosyncratic characteristics of their stride, anatomy, training program (speed, surfaces, etc.) and so on. I’m lucky in that I can run in most shoes without experiencing major issues, but every once in awhile I encounter a shoe that just does not work for me. The Mizuno Sayonara is one of those shoes (disclosure: my pair of Sayonaras was provided free of charge as a review sample by Mizuno).

I seem to be in the minority among those I know who have run in the Sayonara since the shoe seems to be very popular. I even posted a very positive guest review from my friend Brad Patterson. However, after having run in the Sayonara several times I’ve concluded that it’s just not a shoe for me.

When a shoe doesn’t work out for me I spend a lot of time mulling over possible reasons why. With the Sayonara my initial thought was that it was the relatively high 10mm heel-forefoot drop. I rarely ever run in shoes with greater than 8mm drop – 8mm is the upper end of my preferred range, and most of the time I run in shoes that are 0-4mm drop. It seemed like a logical conclusion that the high drop is what did in the Sayonara.

The NB 1400v2 is also a shoe with a higher drop than I typically run in (9mm), and stack heights for the two shoes are almost identical – 24mm heel, 14mm forefoot for the Sayonara, 24mm heel, 15mm forefoot for the NB 1400v2. However, after putting 30-40 miles on the 1400v2’s I’ve determined that they are one of my favorite shoes of the year so far. Simply fantastic. I wrote up my review of the New Balance 1400 earlier this week, but couldn’t stop thinking about why they worked so well but the Sayonaras did not.

Yesterday I pulled out the Sayonaras for a bit and things started to crystallize. I’ve been wearing the 1400v2s a bunch casually in addition to running in them, and have never had an issue with comfort. Putting on the Sayonaras they immediately felt stiff and mildly slappy to me even while walking. I started playing around with the two shoes and here is my hypothesis about why two shoes with such similar sole dimensions yielded such different responses on my feet:

The Mizuno Sayonara is killed for me by “technology.”

When you compare the back half of the Sayonara to the back half of the NB 1400v2 (see photos below), two big differences jump out. First, the Sayonaras have a massive plastic heel counter, whereas the 1400’s have no heel counter. Second, the Sayonara has a hard plastic “wave plate” that extends from the back of the heel to the midfoot, the 1400’s have only a plastic shank that begins at the front of the heel and ends at the back of the forefoot. The 1400 shank is also narrow, and it does not extend to the inner and outer margins of the sole – the purpose is presumably to add a bit of longitudinal stiffness since the shoe is built for racing and speed. I’m not sure what the intended purpose of the wave plate in the Sayonara is.

I’m usually a midfoot to mild heel striker in cushioned shoes, so I tend to land with either most of the outer edge of the shoe contacting, or at a point somewhere between the posterolateral corner of the heel and the midpoint of the arch. The problem with this is that I am contacting along the outer edge with essentially very little cushion between my foot and a big sheet of hard plastic, and this creates a fairly rigid lever that forces my foot to torque very rapidly at contact. You can see how close the plastic wave plate comes to the base of the midsole under the midfoot in the photo below – pretty darn close to where my center of pressure at contact is located (I had this measured earlier this year on a force treadmill).

Mizuno Sayonara – note the grey plastic “wave plate” above the yellow cushion in the heel, also note how the wave plate approaches the bottom of the sole near the midfoot

My hypothesis is supported by what I feel running in the shoes – they feel jerky and slappy, not smooth. It’s kind of like what I’d image running in a dress shoe with a hard rubber heel would feel like. I can adapt my stride to make them more comfortable, but not sure I want to do that (more on this below).

In contrast to the Sayonara, the NB 1400v2 is torsionally more flexible, and the sole is much softer under my contact zone. As such, when I contact the midsole compresses, there is a bit of flex, and the transition into pronation is much smoother and not as rapid. I feel none of the Sayonara induced jerkiness in the 1400, even though the sole dimensions are so similar.

As a way to compare the slappiness between the two shoes, I shot this quick video – listen to the difference in sound the two shoes make as a invert and evert my foot:

So how is it that the Sayonara can work so well for some people and not so well for me? As I stated at the outset, running strides vary highly from person to person, and I think this is a case where a shoe is just not a good match for my own stride. In fact, most Mizuno shoes with a wave plate that I have tried feel clunky when I run in them. In contrast, Mizuno shoes like the Universe and those in the Evo collection (Cursoris, Ferus) have worked great for me since they lack a thick plastic waveplate like the one in the Sayonara. Sadly I’ve heard the Evo collection is going away, so the Universe, Ekiden, and Hitogami (depends on how rigid the Hitogami wave plate is, the Musha and Ronin were iffy for me) may be my only workable Mizuno shoes going forward. 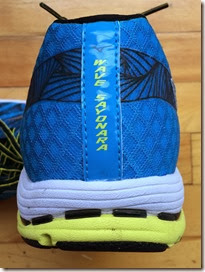 What’s interesting about all of this is that I don’t think my issue would be as noticeable for a forefoot striker or a more pronounced heel striker. A true forefoot striker avoids the wave plate completely so it’s not much of an issue (my friend Thomas is a good example, I’ve seen him run and can confirm he is a true forefoot striker – see his Sayonara review). A more pronounced heel striker may not create as big a lever at the lateral margin of the shoe and would tend to roll forward through the wave plate rather than medially across it like me (the wave plate also appears to have flex grooves in the back of the heel which may help – see photo to right). I think the reason I can make the Sayonara feel better while running is that I can go to one of these different foot strikes and make it work, but that’s also probably why it doesn’t feel smooth to me, it’s making me adapt in a way my body is not used to (and I’m content with how my foot lands).

I’ll end with a brief commentary on shoe “technology.” One of the things I’ve observed is that shoe companies too often feel tied to a signature technology and in my opinion it can stifle creativity. Newton has their forefoot lugs for example, and Mizuno seems tied to having a plastic wave plate in its shoes. Even when they make shoes that don’t really have a wave plate, they feel compelled to color the sole to make it look like it has one.

For most of the six years I have been running seriously the Mizuno Universe was the only non-Evo Mizuno shoe I really had a great experience with. The Ronin 2 was decent, but even there if I could have ripped the wave plate out I would have (I did remove most of the heel cushion under the wave plate on one of my Roning 2s, but never finished the job on the other side so didn’t get to run in them). I would love to try a version of the Sayonara with the heel counter and wave plate removed. Better yet, give me a 4-6mm drop Ronin 2 with no wave plate and I’d be dancing in the streets. Unfortunately for me, the reality is that in this case “technology” kills the shoe.

You just finished reading Why the Mizuno Sayonara Does Not Work For Me: Technology and A Tale of Two Shoes! Consider leaving a comment!