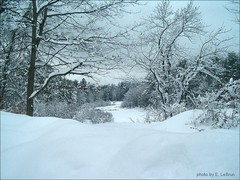 Way back in early November of last year I wrote a post in which I set down a series of running/fitness goals for the winter. Now that Spring is just around the corner, I though it would be a good time to take a look at how well I did in terms of fulfilling these goals. Below is my Winter Running Report Card, including a list of the goals that I set, and the grade that I would assign myself for each of them (I am a teacher after all!).

Goal #1: I hope to run at least 20 miles per week throughout the winter.
Overall, I’m thrilled with the amount of running I was able to get in this winter. A number of factors contributed to this, foremost among them being the fact that I signed up for and ran the Disney Marathon in January, which meant that I had no choice but to put in the miles despite the cold weather. An additional factor that contributed to my successful winter of running is the fact that snow was minimal this winter in New Hampshire, meaning that getting in runs was less of a challenge compared to most years (though the tradeoff, unfortunately, was that I never did get to go snowshoeing). So, since my November 7th post, there have been only five weeks where I did not hit my weekly goal of 20 miles (see weekly mileage graph below starting with the week of Nov. 9), and three of those were due to a post-marathon recovery week and two separate and nasty bouts of strep throat. I’ll give myself a pass given those excuses. All in all, I’d give myself a grade of A-, mainly because of my less than stellar performance over the past few weeks (sick or not). 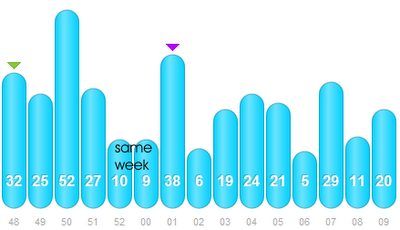 Weekly mileage graph from the week of Nov. 9, 2009 – present. Graph compiled on the via the on-line training log dailymile.

Goal #2: My first running goal for 2010 is to run a sub-3:30 marathon at Disney in January.
Mission accomplished – I ran a 3:24:49 at Disney, setting an 8:00 PR in the process. If you’re interested, I wrote an exhaustive Disney Marathon Race Report back in January. Grade = A.

Goal #3: Keep my weight steady or drop a few pounds over the winter.
Again, mission accomplished. I wish I could remember exactly what my weight was back in November so I could report the actual loss, but the important point is that I actually weigh less now than I did then. In fact, I’m at a 10+ year low right now, with my weight having been as low as 166 lbs in the past week. This contrasts dramatically with last year, when I put on 5+ lbs (probably more) over the winter due to holiday overeating and slacking off on the exercise. I’m probably more proud of meeting this goal than any of the others that I set. Grade = A.

Goal #5: Stop neglecting my upper body and core.
I was doing very well with the 100 Pushups Program heading into January, and I was seeing large gains in upper body strength as a result. Then the Disney Marathon and an ensuing vacation week came along and knocked me off my game. After a few attempts to restart week 5, my motivation fizzled and I’ve just now restarted the program back at week 1. I came close, really close, to completing the program, but I have to assign myself a grade of C for failing to follow through (I’m wondering if Pushup Professor Speirs would agree with my grade assignment?).

Goal #6: Do something big for others with my running in 2010.
This is a goal that is still in progress, so I’ll assign myself an Incomplete. I have something in the planning stages, and if it works out I’ll announce it when the time is right.

So there you have it, my winter running/fitness report card. Aside from the C in the upper body workout section, I’m really quite happy with how things went this winter. Now on to Spring and a new set of goals, which I hope to outline here on the blog sometime in the next few weeks. If you haven’t done something like this before, I’d highly recommend trying to write down some goals – it’s a great way to hold yourself accountable, and the fear of a bad report card is a great motivator!