One of the most popular posts I wrote last winter was a piece on whether you should wear shorts or no shorts over running tights. The post currently has 135 comments, quite possibly a record for this site, and it quickly became clear that I had hit on a topic of great significance to runners.

In the post mentioned above I discussed wind protection for the nether regions as an argument for wearing shorts over tights, and I asked for recommendations for wind-proof running tights to try as an alternative (at the time I had never tried them). Several people recommended windproof briefs, and other had recs for tights that incorporate windproof fabric. I initially purchased a few pairs of windproof boxers from my local Eastern Mountain Sports, and they were a big step up from what I had been using previously. Unfortunately I can’t seem to find them for sale anymore, but similar products are available from other brands. If you’re looking for the cheapest option, a pair of windproof briefs is a good place to start.

In addition to the boxers, I also bought a few pairs of windproof tights on clearance at the end of last winter. And this winter I have received a few review samples of windproof running pants that I’ll review here.

I’ll start by saying that windproof fabric does make a big difference. I find that my legs (particularly my thighs) still do get cold since the fabric is tight to the surface of the skin, but they do a very good job preventing wind from piercing the fabric and reaching “critical” areas. And wearing windproof briefs underneath windproof tights makes for an even better combo. With that said, let’s take a look at a couple of pairs of pants designed for winter running. 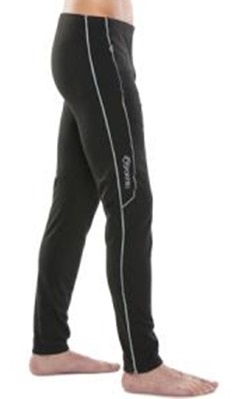 Let me say first that “skinny” is not generally a term associated with anything in my wardrobe. The Sporthill Callaghan pants are the closest thing to a pair of skinny jeans that you’ll ever see me wearing! The Callaghan pants feature Sporthill 3SP fabric, which is advertised as capable of blocking wind up to 35mph. The pants are designed for XC Skiing, but are also marketed to runners.

My first thought when trying on the Callaghan pants was that they fit quite differently than a traditional running tight. I generally wear a 34 inch waist in pants, and they sent me a size medium. The pants were a bit looser than a pair of tights, but not quite as baggy as a wind pant or something like that. After a washing they tightened up a bit and the fit now feels a bit more tight-like. I actually think I should have sized up to a large as I liked the looser fit prior to the first washing.

The 3SP fabric is fairly thick, and does a great job keeping me warm. In fact, these might be the warmest running pants that I have right now. On the down side, after washing the surface of the fabric got a bit roughed up and it now collects hair like crazy. In a house with two dogs and a cat this is a bit of a problem, though thankfully nobody gets a very close look at my pants when I’m out running.

The other downside of the Sporthill Callaghan pants is the price. You’ll generally have to pay a premium for windproof pants/tights, and these are not cheap at an MSRP of $119 (though Sporthill is currently selling them for $99, and LL Bean has them for $79.99). 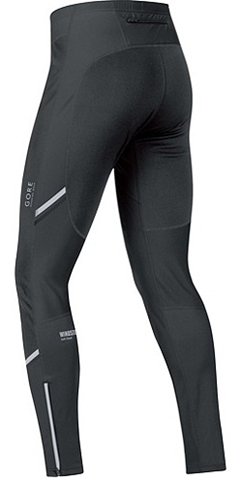 I’ve always associated GORE apparel with quality – kind of like Salomon in that sense. And as with Salomon, you pay a premium for GORE apparel. As someone who buys most of his running apparel at Target, I generally would not shell out the dollars for their products unless they showed up in a flash sale on The Clymb or another site like that.

GORE sent me a pair of their Mythos 2.0 Windstopper tights to try out and to say that I’m impressed would be an understatement. From fit to fabric they are just a really well-made and extremely comfortable product. They sent me a medium, and they fit perfectly, even after several washings. The fabric has retained its softness, and they feel great on the run. They Mythos tights are a bit thinner than the Sporthill pants, so maybe not quite as warm, but fit and feel make them a superior product in my opinion.

Once again, the big con here is price – is any pair of pants worth the MSRP of $149.99? In this case, if I had to keep only one pair of winter running tights currently in my drawer, these would be the pair. However, I could spend a lot less for a couple pairs of windproof briefs and a decent pair of non-windproof tights and still save a bit of cash. If you have cash to burn, these GORE tights are worth it, but that is a decision each will have to make on their own.

The GORE Mythos Windstopper tights are available for purchase at Running Warehouse and Wiggle (UK).

How about you – do you have any recommendations for winter running pants (particularly cheaper options)?