I’ve been running a lot this winter with my iPhone 5s using the iSmoothRun App along with a Magellan Echo watch (the Echo controls the phone and displays my run stats). One of the nice things about running with my phone is that I have access to my music, podcasts, audiobooks, and Spotify – lot’s more options than with my old iPod Nano.

I generally don’t like dealing with wired headphones while running unless I can keep the wires out of the way under my shirt or inside a jacket. An alternative that I often use are Bluetooth headphones that sync wirelessly with the phone. Over the past few months I’ve been trying out two different models of Bluetooth headphones. One was sent to me for free as a media sample – the Jabra Sport Wireless+. 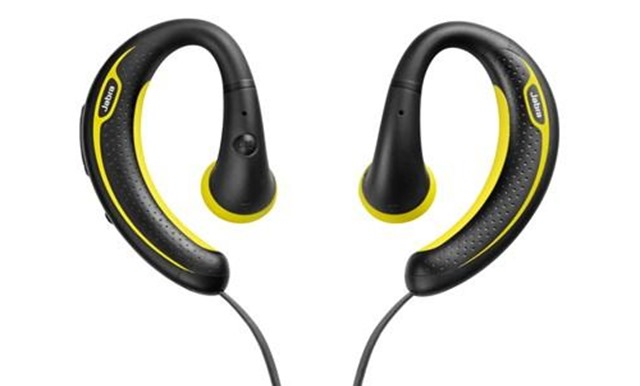 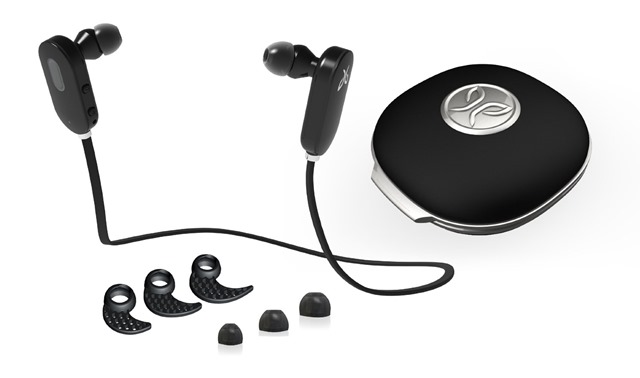 When considering Bluetooth headphones, I’ve found that there are a few critical things to consider. I’ll go through these and one-by-one and choose a winner for each.

Initial syncing of Bluetooth devices with an iPhone is pretty easy – you turn the device on, turn on Bluetooth in the phone settings, let the phone search for and find your device, then sync.

The tricky part is that on some headsets you need to press and hold the ON button for a bit longer than you might think necessary to get them in sync mode. It’s like a press of the button turns them on, but you need to press and hold for a bit longer to enter sync mode. The Jabra set is helpful in that there are voice notifications that tell you the headphones are ready for pairing. The Jaybird just uses beeps/tones that aren’t as intuitive. The first time I turned on the Jaybirds I had trouble syncing and it was because I apparently hadn’t held the button long enough. 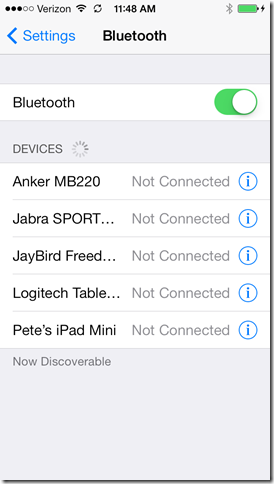 Once your device is recognized by the phone it stays present as a selectable option under the Bluetooth menu (see iPhone screen capture to the right) and future pairing is simply a matter of turning on the device, selecting it from the menu on the phone, and allowing it to pair. One issue I found here is that the Jabra will not re-sync unless you make the iPhone forget the device first and then search for it anew. A bit of a pain, but not a deal-breaker. The Jaybird re-syncs with no issues.

My experience with maintaining sync while running depends on where I keep my phone. With my phone in my jacket chest pocket I almost never experience skipping or lost connections on either headset. My guess is connection with a phone placed on the upper right arm would be fine as well (these headsets tend to work best when the phone is on the same side of the body as the bluetooth receiver). When holding my phone in my hand I get very occasional skipping with both headsets, but nothing that bothers me much (arm swing movement is a lot more pronounced at the hand).

Winner: Draw – Jabra gets a plus for the voice guided syncing, but a minus for needing to forget the device and re-discover it every time I sync it with my phone.

I’ve found fit to be really tricky with Bluetooth headsets. Because the devices need to be big enough to carry a battery and bluetooth receiver, they are much bulkier than regular earbuds. I’ve had consistent fit issues with the Jabra headset – it doesn’t seem to want to stay on top of my ear the way it should (I might just have weird ears, who knows…). This isn’t a problem when wearing them under my winter hat since that hat keeps them in place against my head, but without the support of the hat I often find myself having to mess with them to keep them secure. They come with a bunch of earbud attachments (see photo below) that allow you to customize fit, and I’ve found that the ones that have a little arm that extends up under the fold covering the cavity above your ear canal do the best job keeping mine in place (anatomy tidbit – this little ear cavity is called the cymba concha). 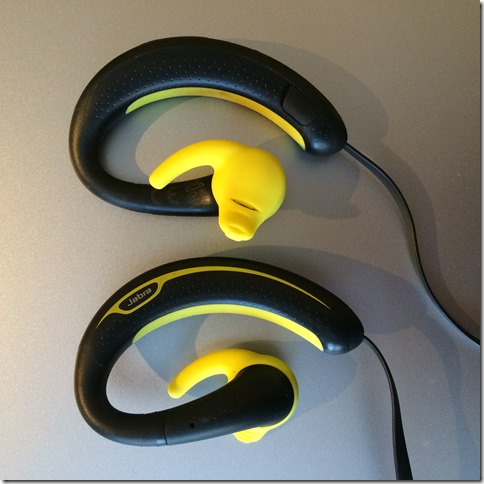 The Jaybird headphones stay put very well when using the included (and removable) ear hooks which loop over the top of your ear. I have no fear of these falling off mid-run with the ear hooks attached. The Jaybirds also come with a variety of attachments that allow for a customized fit, and included among the options are ones that have little arms that slide into the cymba (much like the Jabras). With this attachment they fit pretty securely in the ear even with the ear hook removed. 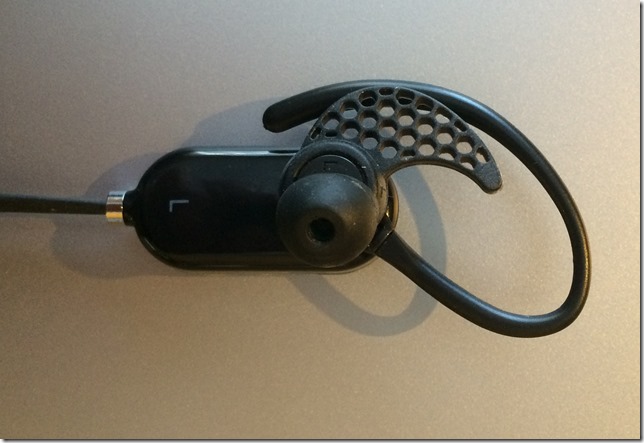 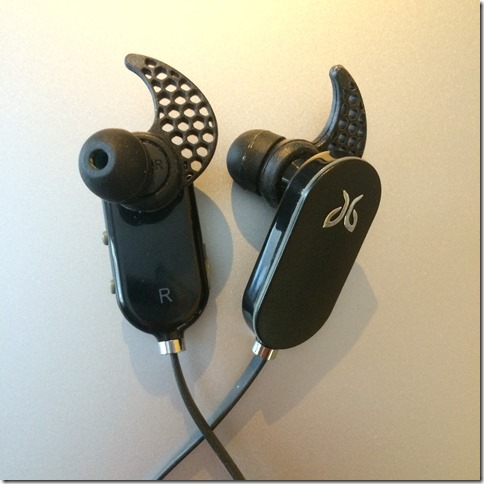 No contest here in my opinion, the sound produced by the Jaybird is deeper and fuller, much better quality. This might in part be because the Jaybird is an in-ear bud that fills the ear canal. This gives better sound, but does reduce the ability to hear what’s going on around you which can be a concern if running on the road. The Jabras do a better job of allowing in ambient noise, but the sound is tinnier and not as rich.

Jabra claims up to 4 hours of talk/listen time for the Sport+, whereas Jaybird claims 6 hours of talk/listen time for the Freedom (both have microphones and can be used to take phone calls). I had a pair of the original Jabra Sport (before they added the + to the name) and it was not long before the battery lost it’s ability to hold a charge. I was lucky to get 30 minutes out of it – not good at all. My hope was that the new version would fix this, and so far my pair is doing fine. But, there are numerous negative reviews on Amazon from people complaining that their device died after minimal use or stopped holding a charge (3/5 star average on 137 reviews is not great. Given my experience with the first edition of the headphones, this scares me a bit. I just charged the Jabras and did a battery run-down test while playing music through the phone and got a total of about 3 hours, 30 minutes of play time. Not bad.

One thing I would like to mention in Jabra’s defense is that at one point I though my set had died as well. After doing the battery run-down test I recharged them because I wasn’t sure if they had been fully charged when I ran the test the first time. They wouldn’t take a charge, and all I was getting was a red blinking light which others have reported as the sign of a dead device. Turns out I tried another USB cable and they charged just fine. The cable I was attempting to use first was a Belkin cable with a sticker that said “for charging only” on it so maybe it was only intended to work with a wall outlet an not a computer? Anyway, swapping the cable solved the problem.

I bought the Jaybird Freedoms in 2012 and they are still holding a charge just fine (though there are reports of some issues on Amazon for these as well).  I ran a battery run-down test on the Jaybirds as well and after a full charge they gave 5 hours, 30 minutes of play time. One negative on the Jaybird Freedom is that it uses a proprietary charging cable (one more cable to clutter my desk drawer).

Given that both devices have had reports of battery failure, a look at the warranties for the respective devices makes sense. Jabra offers a limited 1 year warranty, but specifies that it does not cover damage that results from “contact with liquid, water, rain, extreme humidity or heavy perspiration.” Not covering heavy perspiration is a bit surprising for a device built for use while exercising. My guess is that this does cover battery failure for one year though if you want to take a risk despite the reports on Amazon.

Jaybird also offers a 1-year warranty on parts and workmanship (should cover battery failure), but also offers a “lifetime warranty against sweat” (you have to register your device for this here). Jaybird makes a big deal about their products being designed for use while exercising, and they emphasize that their products are sweat-proof. The warranty even specifies that the product “will not fail because of perspiration for the expected life of the product, as determined by Jaybird in its sole discretion.” They indicate that the battery should last 2-3 years, so I guess that is a reasonable estimate of the “expected” lifetime of the product.

The Jabra Sport+ sells for about $7 less than the Jaybird Freedom at Amazon.com.

Based one the more secure fit (on me at least), superior sound quality, longer battery life, and lifetime warranty against sweat the Jaybird Freedom pretty much blows away the Jabra Sport+. At a similar price point, I really see no reason why I would recommend the latter for someone planning to use the headset for running (unless you really need a FM radio receiver, which the Jabra has). The Jaybird Freedom is the clear winner in this comparison.

I should point out that the Jaybird Freedom reviewed here has been updated and renamed the Jaybird Freedom Sprint. The Sprint is a bit smaller in form-factor and swaps the proprietary charging cable for a standard micro-USB cable, but as a result of the slim-down it loses a bit in battery life (and costs about $20 more). I have not used the Sprint yet so cannot comment on it. Jaybird also has a new model called the Jaybird BlueBuds which are smaller still and boast 8 hours of play time (best of the three if true), but they sell for $140. The BlueBuds get good reviews on Amazon (4/5 stars for 885 reviews) and I’d be tempted by them if I didn’t already have the Freedoms.