Women and the Minimalist Running Movement: Merrell Wants Your Feedback 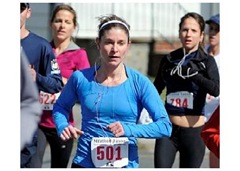 Back in September I traveled to New York City to attend a roundtable discussion hosted by Merrell Footwear. The group in attendance was diverse, and included bloggers, journalists, doctors, physical therapists, and a former Boston Marathon winner. Despite our differing backgrounds, one thing we had in common is that most of us had a Y chromosome – the group was dominated by men. Emily Snayd, the rep for Merrell who had organized the event (and a darned good runner!), indicated that despite her best efforts, she’d had a very hard time finding women to participate.

The gender bias within the minimalist movement became one of several focal points of discussion during the roundtable, and many theories were put forth as to why men seem to be more likely to ditch their traditional shoes than women. This bias was borne out the following day at the NYC Barefoot Run – though many barefoot women were present, there was clearly a decided bias toward the male side among the barefoot runners present.

In an effort to learn more about this gender bias, Emily at Merrell is going to be hosting a discussion on their Facebook page (http://www.facebook.com/merrell) this afternoon (December 1) from 1:00-2:00, and tonight from 7:00-8:00 PM. It’ll be interesting to see what comes out of this – if you can’t take part, feel free to share any thoughts on this topic in the comments below as well – I’ll pass them along and make sure they are heard.

For more information, you can check out Emily’s post over on the Merrell blog.