You Be The Gait Analyst: Analyze Sam’s Running Form 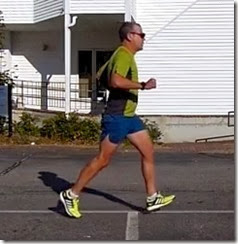 If you’ve followed this blog over the past six months you’ll know that I resigned from a 10-year career as a college professor back in May. Aside from my desire to pursue this blog on a more full-time basis, a second big motivator for leaving academia was that I had an offer to work out of a local injury clinic as an exercise physiologist and gait analyst.

My buddy Brett Coapland is a chiropractor who specializes in manual therapy and treating athletic injuries, and he also happens to be a pretty competent ultrarunner (11th place overall at the VT 50K this year!). I’d helped Brett out from time to time with gait analyses, and he happened to be looking to expand his practice. He was moving into a new office, and there would be room for me to work out of the clinic if I wanted to, and I jumped at the chance. I’m now working 3 days a week at Performance Health Spine and Sport Therapy doing gait analysis and a bit of coaching, and it’s been a blast so far.

Last week a fellow shoe geek and running blogger stopped by for a visit and a run. I’ve known Sam Winebaum for a long time as a fellow blogger (he writes Sam’s Running, People, Places, and Things), and he often sends me reports from the Outdoor Retailer shows since he spends a lot of time doing consulting work in Utah. I offered to film Sam for fun while he was in town, so we hit the parking lot and shot a bit of video (I do my filming outdoors whenever possible).

Sam is not injured, so this wasn’t a clinical visit. In fact, he just recently finished the St. George Marathon in a time of 3:33. His marathon PR is 2:28 (“many moons ago” as he puts it), and he’s finished in the top 15 at the Mount Washington Road Race on 3 occasions in his life (he was second junior in the race one year!).

We thought it might be fun to share his videos and let you critique them. As I mentioned, he’s not suffering from an injury, but he does feel like his stride has lost a bit of its pop as he’s gotten older. It’s also worth pointing out that he is well aware of his right foot turning out, it stems from a childhood injury that never quite healed properly. He currently is running in Hokas, the adidas Adios Boost, and the adidas Energy Boost.

If you have any form suggestions to help him find his pop, fire away! (I shared my thoughts with him already, but wanted to keep out of it here). Have fun!

Note – these videos are shot at 120fps in HD – you can turn on the HD quality version by adjusting the settings under the little gear icon on the bottom right in the YouTube windows.

So what do you think?