As a company, Zappos is known for their exceptional customer service (indeed, “Powered by Service” is one of their taglines – see logo at left). I’ve long been a Zappos affiliate, meaning I get a commission from sales made via clicks from this site, but I’ve only ever ordered from them a few times. And until today I’ve never had to make use of their customer service.

Yesterday I ordered two pairs of Inov-8 insoles from Zappos. I often get asked about thin, flat insoles, and I wanted to check these out for a post I was planning on writing. Mainly I wanted to see if they are the same as the insoles that come in shoes like the F-Lite 195. Anyway, I ordered pairs of the 3mm and 6mm Inov-8 insoles ($10 each) and I was surprised when a Zappos box arrived on my doorstep today, only about 24 hours after placing the order.

When I picked up the package it felt heavier than a package containing just two pairs of thin foam insoles should. I opened it up to find 11 pairs of insoles inside. One pair of the 6mm insoles, and 10 pairs of the 3mm insoles. I started to worry that maybe I had made a mistake and added a 0 to the quantity in the shopping cart. Last thing I needed to do was spend $100 on a bunch of insoles I don’t need. I checked the packing slip and indeed it said only one pair should have been sent. 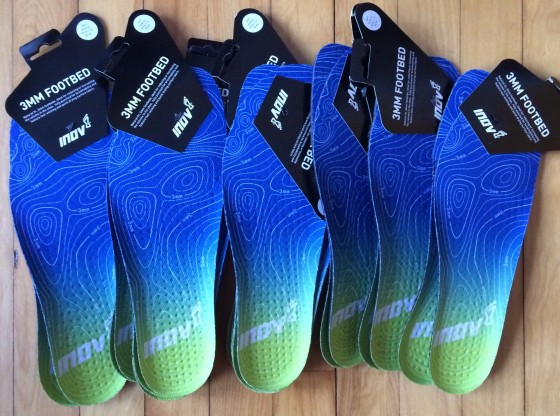 Being an honest guy, I tweeted @Zappos about the mistake, expecting I might hear back in a day or two. They responded in what I’d estimate was about ten minutes. They asked me to direct message my order number to them via Twitter so that they could look into what happened. I did, and got another tweet shortly thereafter telling me that I needed to follow them in order for them to message me back. I did that, and a few minutes later the phone rang. It was the guy I had been talking to on Twitter, and he said for some reason he still wasn’t able to message me, so he figured he’d just call.

He said that indeed someone (or some electronic device) had made a mistake on their end. I asked if I could send the extra insoles back. He asked me if I needed them. I said no. He asked me if I might have friends that need them. I said I write a blog and was going to write about them so I could probably give some away either via my website or at my clinic. He said that would be great, keep them and find them a home.

So now I’m the proud owner of 10 pairs of flat, 3mm thick Inov-8 insoles. And Zappos has proven to me that their customer service lives up to its reputation. I’m impressed.